The Best Hotels to Book Near the Meatpacking District, NYC 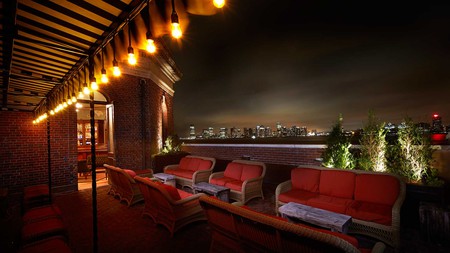 Enjoy views of the Hudson and the Manhattan skyline from the rooftop bar of the Jane Hotel | Courtesy of The Jane / Expedia.com

The Meatpacking District of New York – once an industrial neighborhood in decline – is now home to fashionable boutique shops, artists, unique restaurants and, of course, the first leg of the High Line. Here are the best hotels in Meatpacking District, all bookable on Culture Trip.

It wasn’t such a long time ago that the Meatpacking District was one of the biggest producers of dressed meats in the US, being home to some 250 slaughterhouses and packing plants. Today, most of the factories have made way for trendy bars, boho boutiques and cultural institutions such as the Whitney Museum, though some factories have survived the changing times. Unsurprisingly, a number of equally chic hotels have decided to call the area home. Here is Culture Trip’s pick of the best hotels near the Meatpacking District. 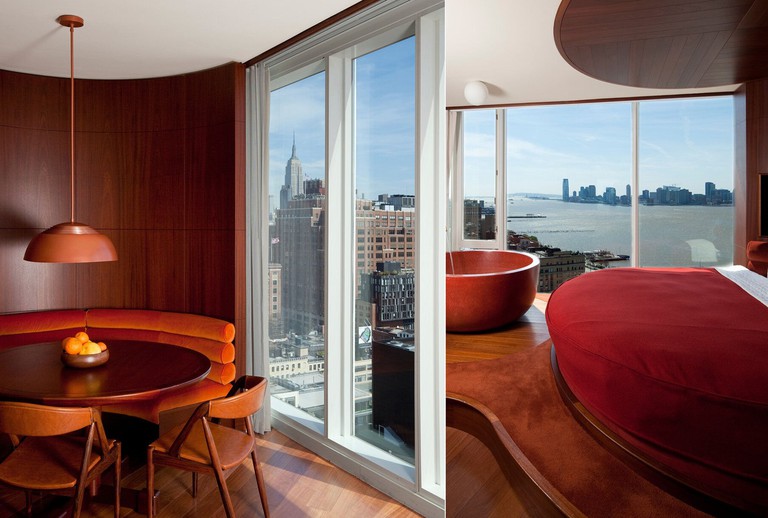 Cutting a striking form, the double glass-fronted façade of the Standard, High Line seemingly floats on concrete stilts. It’s a good indicator of what awaits inside: a mishmash of time-bending decor that features curved headboards fused into the wall, 1970s-style wooden furnishings and all-white everything else. Beyond the rooms, the hotel is filled from top to bottom with eating and drinking destinations – from the ground-floor Biergarten serving steins of German beer and bratwurst, to the glittering rooftop bar, Top of the Standard. Not to worry, though, waking up in your enormous bed to sweeping views of the city will soothe even the worst of hangovers. 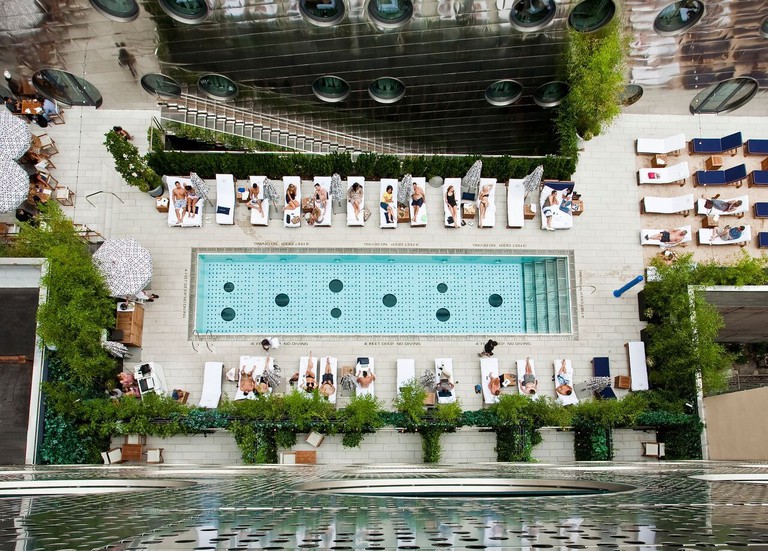 With porthole-like windows looking out over the Hudson, the 314 intimate, loft-like rooms at Dream Downtown will make you feel like you’re on a thoroughly modern cruise ship. Adding to the illusion is the 5,000sqft (465sqm) pool deck, which features imported sand from the Côte d’Azur, private cabanas and a 50ft (15m) heated pool, the glass bottom of which looks down into the lobby. The dining features multiple cuisines, with a California-inspired green cafe, a modern Mexican wine cellar and a chic British bar, alongside the popular PHD Rooftop Lounge nightclub. 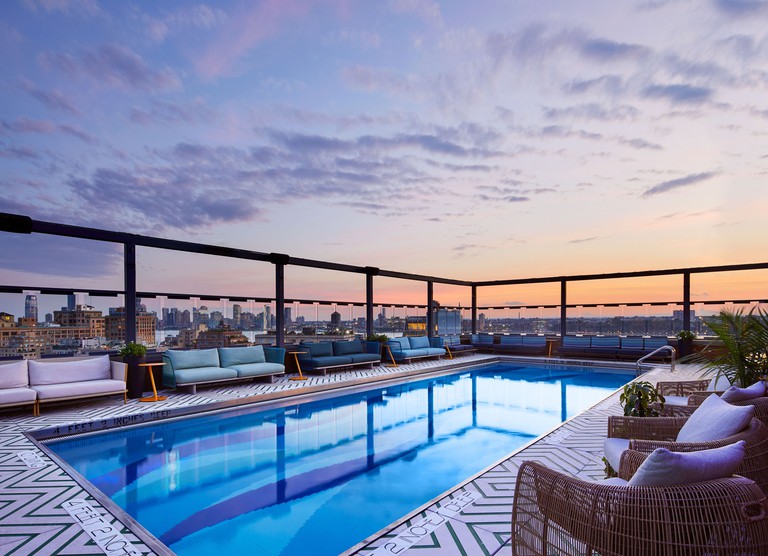 Courtesy of The Gansevoort / Expedia.com
If a sweeping view of the Manhattan skyline is high on the list of must-haves during your stay in New York, then consider checking into the Gansevoort. The spectacular heated rooftop pool is open year round, and makes for the perfect place to sip cocktails while soaking up the city views. Things are no less entertaining indoors, thanks to enormous rooms equipped with speakers and fully stocked minibars to help you get the party started. Keep it going at the choice of venues in the nearby vicinity, including the Tippler and Fiddlesticks Pub. 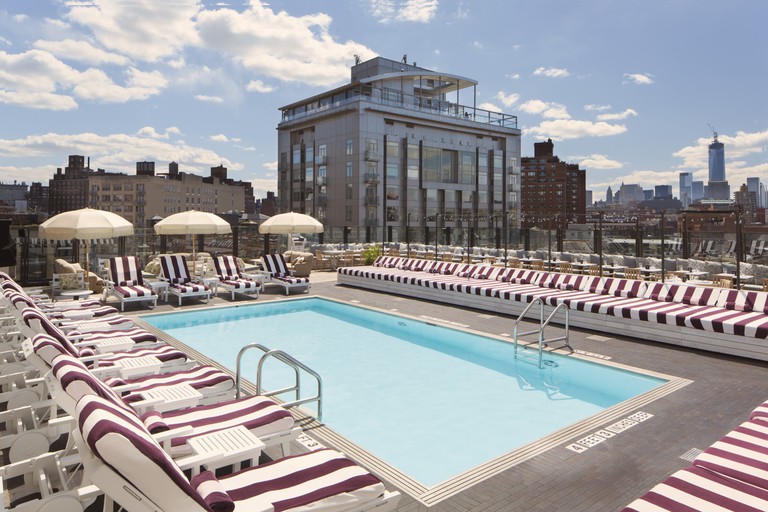 Because Soho House is a private members’ club as well as a hotel, it can seem a little exclusive. But this seven-floor converted warehouse has a rustic, homey feel, with distressed, exposed wood and velvety cushions that will put you at ease. Rooms range in size from Cozy to Big, and include everything from a coffee machine and fully stocked mini-fridge to a cocktail-making kit. With a spa, restaurant, screening room and rooftop swimming pool, Soho House is a popular destination for visitors to the Meatpacking District. 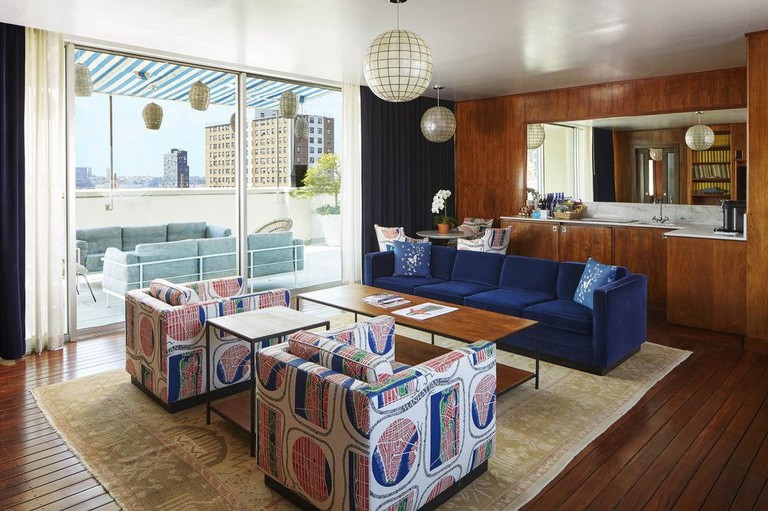 Courtesy of The Maritime Hotel / Hotels.com

Founded in the 1960s as the office for the National Maritime Union, the Maritime Hotel doesn’t hold back on the nautical theme. The interior combines a rich, blue color scheme and ship-cabin decor with old-fashioned touches, including stained teak-wood paneling and bookshelves filled with vintage issues of National Geographic. Peeking through your porthole-style window, it would be easy to feel as if you’re aboard a 1950s cruise liner, sailing high above the Big Apple. Grab dinner at Catch Steak or Tao – the former a classic steakhouse, the latter a multi-level eatery serving pan-Asian cuisine. Be sure to don your finest attire, as both are considered upmarket establishments. 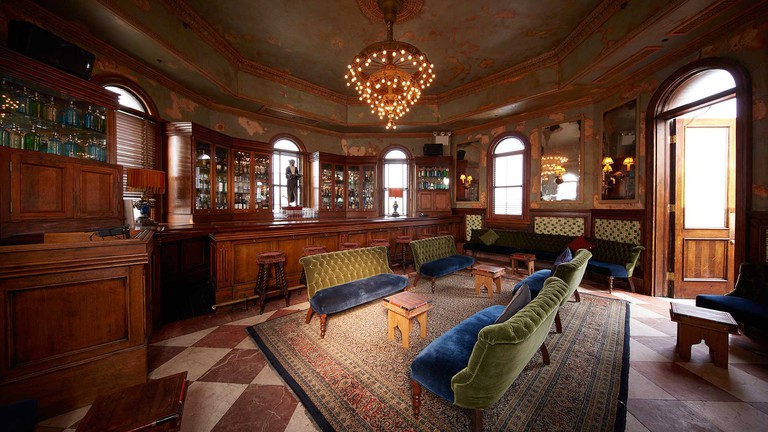 Courtesy of The Jane / Expedia.com

Opened at the turn of the 20th century as a lodging house for sailors, the Jane Hotel reopened in 2008 as a stylish hotel with old-school charm – featuring wood paneling and designer wallpaper, and bellhops and maids in traditional uniform. While the rooms are snug, they’ve been outfitted to resemble vintage ship cabins or sleeper compartments, with upscale touches and storage space. Enjoy cocktails in the grand ballroom, lavishly designed with a large fireplace and a disco ball, and check out the Old Rose restaurant – overlooking the Hudson – for all-day dining. 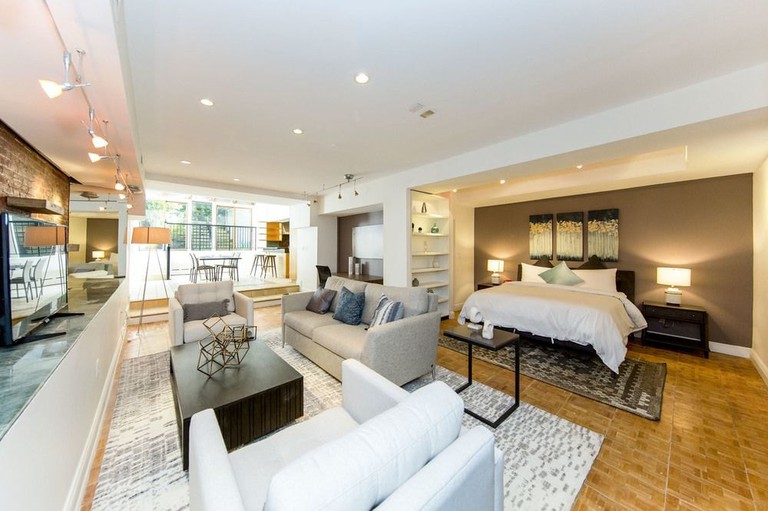 Tucked away in an unassuming brick building, the Chelsea Pines Inn is a five-story, walk-up bed and breakfast with plenty of character. Decorated with posters from the Golden Age of Hollywood throughout, this hotel is a particular treat for classic-film buffs. With both a seasonal garden and an indoor greenhouse, not to mention its proximity to the High Line, it’s easy to feel like you’re not in the city at all.