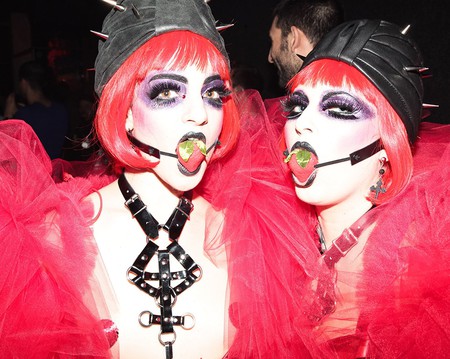 New York’s nightlife and fashion scenes have been purveyors of cool for decades. As ’90s nightlife fashion appears on runways around the world, here’s a look back on the birth of the trend.

In many ways, the all-night New York rave parties of the ’90s serve as a beautiful, prophetic disaster: a last call for youth culture. Nostalgia leans towards the saccharine: this is not that. This is the tale of a teenage wasteland, inhabited by adolescent Mad Hatters in platform sneakers, wearing glow-sticks around their necks. This is what fast fashion retailers and Parisian runways alike are pumping out as trends for 2018. This is ’90s subculture distilled into an exploration of the all-night parties that went down on Friday nights in The Shelter. 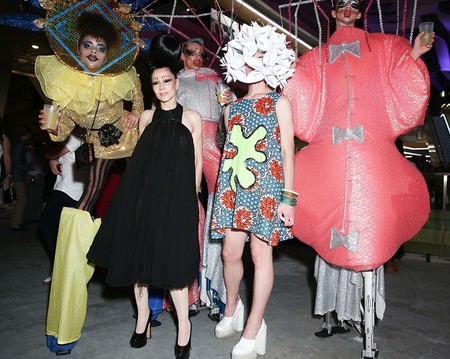 As ’90s culture continues to trend, you may wonder, what is it about this era that millennials find so alluring? To a degree, the fascination can be attributed to the 20-year cycle of trends in the fashion industry. But there’s another piece to the puzzle that is specific to ’90s New York and encapsulated by rave parties known as N.A.S.A., Nocturnal, Audio, and Sensory Awakening, where in the realm of nightlife, DIY fashion replaced designer labels, as kids reclaimed their childhood by wearing backpacks fashioned from dolls. They wore baby barrettes, pacifier necklaces, and Elmo t-shirts to the club. There, with glitter makeup and platform Mary Janes, wide leg-jeans with pockets for their beepers called JNCO jeans, kids experimented with sex, drugs, and breakbeat. There, on Friday nights in a loft in lower TriBeca, designed to hold 700, over 1,000 kids came of age. They came to find others like them, and to find themselves, because sometimes you need to put on a costume to realize who you really are.

Sartorial self-expression always exists between the desire to fit in and to stand out, projecting an image of who you want to be and who you really are. What a delicious metaphor for adolescence itself. What’s so interesting about ‘90s nightlife fashion in New York is that it was dominated by adolescents. In this way, fashion moved hand-in-hand with coming of age, and a blurring of fantasy and reality.

New York’s nightlife has a rich history of setting trends designers can capitalize on and market to the masses. From Susanne Bartsch’s “savage” parties next door to the Chelsea Hotel to Ian Schrager’s Studio 54, the New York club scene has a legacy of seeing and being seen. “This wasn’t just any club. This was an elevation of sophisticated luxury,” says photographer and fashion historian Matthew Rolston of Studio 54. Rolston’s exhibit and book Hollywood Royale document the glamorous urban culture started by disco fashions in the late ’70s.

King of the club was a designer known as Halston, renowned for minimal design, maximum luxury, and redefining the scope of 1970s American design through his evening gowns synonymous with a jet set life. Rolston, a young photographer on assignment for Warhol’s Interview magazine, visited Studio 54 for the first time in 1977, “[Studio 54 marked] a mix of high and low in a way that hadn’t been done before,” he says. 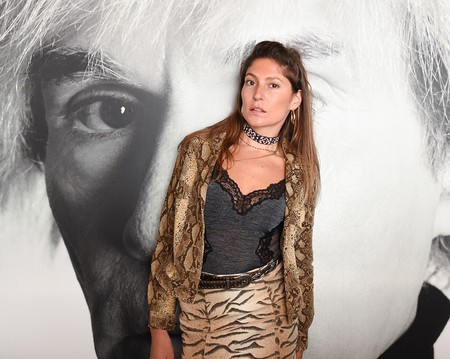 By the late ’80s, nightlife rivaled theatre and New York became an international hub for fashion designers who outfitted club-goers in their designs. Bartsch hosted monthly parties at the Copacabana, where John Paul Gaultier, Thierry Mugler, Marc Jacobs and Calvin Klein were regulars. 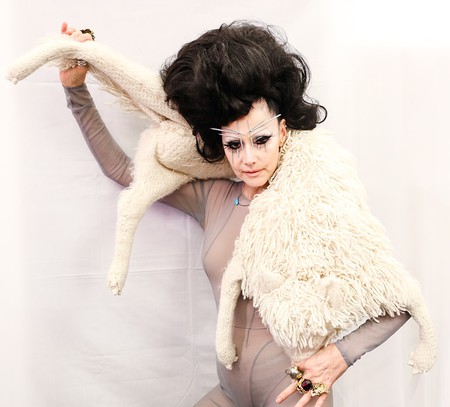 Among the democratization of cool in the clubs, there was a somber cloud that hung over the party. “By 1988 AIDS had taken half my rolodex,” Bartsch said to Simon Doonan, and, to survive, she became a fundraiser and went on to found the 1989 Love Ball, held at Roseland. At that point, the fantasy of the New York nightlife was married to philanthropy, and fashion served as a vehicle to spread the message. Clubbing became a kind of charity for socialites, the fashion elite, and the upper class of Manhattan, until all of a sudden, the pendulum swung, and a new type of New York club scene was born.

New York in the 1990s marked a liberation of clubbing and its fashion from the moneyed elite. This was a time when after-hour parties went unpoliced, when Molly was called Ecstasy, when you couldn’t scroll through experiences, and when kids raged all night.

“I don’t think you could pull it off these days,” says multimedia artist Scotto Osman, also known as DJ Scotto, who founded N.A.S.A. in early 1992 with his partner DB. “My ear was to the ground,” he says. “N.A.S.A. was started as an all ages non-alcoholic club that was the first consistent rave party in New York, bring genres like breakbeat, jungle and drum and bass.”

Whereas the sartorial aesthetic of Studio 54 was “adult in its display,” according to Rolston, the ’90s rave scene struck a different chord. N.A.S.A. and The Shelter were referenced in Larry Clark’s 1995 cinéma vérité film, Kids, a landmark movie that told the story of reckless teenage skaters who found family not in the home, but rather in their friends.

“The club scene was actually shot at Tunnel” says Scotto, who designed the lighting for the film’s famous club scene. Kids, which went on to garner over $20 million and launched the career of fashion impresario Chloë Sevingy, helped to bring the aesthetic of N.A.S.A. parties to the mainstream.

What was so remarkable about the N.A.S.A. parties at The Shelter? For one, they were open to high-school kids, many of whom Scotto hired to do promotion.

“The ABK crew was a more affluent mix of kids,” he says of the prep school promoters who joined skaters, runaways, 20-somethings, and people from all over the world, curious to experience a New York rave. “We had a couch in one room, to give kids from the street a home. Some place to go with their friends.”

The multi-level club also housed a “chill out room,” where kids who were having a bad trip could speak with counselors from Barnard College. “We wanted a place where kids could be kids, so we allowed recreational experimentation. Most clubs would throw you out if you had a bad experience. We felt the right way to handle it was to bring in a team of experts.”

Indeed, there were no overdoses at The Shelter, a pseudo-home for those navigating urban adolescence.

This reclaiming of pre-adulthood found sartorial expression as kids stitched their childhood sheets into their wide-legged JNCOs, and wore mini backpacks fashioned from baby dolls. Says Scotto, “This was the beginning of DIY culture. Kids would take their sneakers and have platforms added onto them at Anthony’s.” Whereas the Studio 54 generation wanted to embrace adulthood, the ’90s ravers intentionally mocked it.

While grunge found popularity with the northwestern part of the country, New York’s rave scene took its theatricality from Warhol and Bartsch and infused it with teddy bear knapsacks, knee-high socks, and baby-doll dresses. Gender bending fashion was de rigueur as girls wore sportswear from Fila and Adidas, including headbands, windbreakers and track suits, while boys wore tight baby T-shirts, eyeliner, and thrifted dresses over jeans. Brands like Liquid Sky and X-Girl emerged to cater to these trends, with flagships in Soho and the East Village. These labels would go on to see a millennial resurgence today. 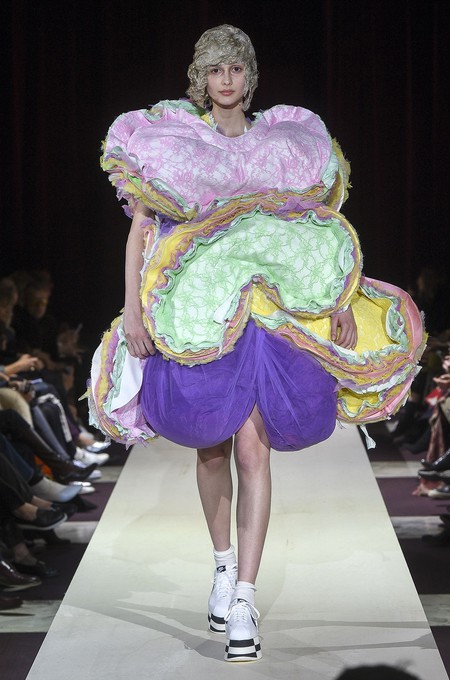 In dissecting the semiology of these fashions, you can see a glamorous fragility teetering between two worlds—in the limbo of a teenage wasteland popular today on the runways of major designers from Hood By Air to Junya Watanabe. The platform sneaker is a mainstay of spring 2018, with designers from Balenciaga to fast-fashion retailers like Zara appropriating what ’90s New York kids did.

In ’90s New York, what you wore to the club wasn’t just a marker of who you were, it defined your status.

Anthropologist Sarah Thornton defines this phenomenon as subcultural capital. Drawing on French theorist Pierre Bourdieu’s notion of cultural capital, Thornton derives the concept as a melange of who you know (and who knows you), as well as your own knowledge of current trends.

“Club cultures are taste cultures,” says Thornton, “where knowing the latest trends translates to a kind of coolness.” It’s no wonder that fashion designers, who are constantly seeking inspiration, “Find it in youth culture, where taste and style serve as strong identifiers.”

Recently, Kylie Jenner posted a picture of herself on Instagram wearing a sweatshirt with a logo from a N.A.S.A. party flyer. Scotto, who owns the rights to the image, screen-prints clothing from his house in the Pennsylvania woods. The predictability of the fashion cycle is evident as his clothes are worn by the likes of Frank Ocean, and a new set of club kids, like Jenner.

“That N.A.S.A. swoosh,” Scotto says, “it means something different now.”

The ’90s remain a crucial time in modern Americana because, among other cultural markers, this decade was on the brink of technology as it’s used today: everyone had computers and used them for tasks like designing club flyers—but the instant replication of images that defines today’s culture was unheard of. Sartorial imitation didn’t have the legs it has today, where fashion shows are live-streamed and designers scroll Instagram rather than nightclubs for trends. The ’90s nightlife fashion retains a purist authenticity. You could argue that, at this time, New York fashion was anchored in a culture on the cusp of losing its innocence, especially in comparison with today’s New York.

That a group of kids partying ’til dawn could capture that essence simply by what they chose to wear is quite remarkable.