Best known for his kinetic, mechanical sculptures, Swiss artist Jean Tinguely (1925-1991) created sculptures from everyday objects. Structured like machinery but serving no particular purpose, some of Tinguely’s works were designed to self-destruct, and others were constructed with a predetermined malfunction, culminating in an unpredictable finale. Tinguely was influenced by contemporary movements like the Bauhaus and Futurism, but Dadaism was his greatest inspiration. We take a closer look at this unconventional artist’s most prominent works.

In the 1950s, Tinguely produced a series of sculptures/ machines that produced their own art. He named this series Métamatics. The sculptures centred on a mechanical arm, with which the machine could draw pictures consisting of lines and dots. The viewer had the power to choose which drawing implement the machine used, giving the works a reflexive nature wherein the viewer was no longer passive but became a part of the performance. The Metamatics drew on ideas expressed in Tinguely’s earlier work, questioning the role of the machine in society and the interaction with technology.

In 1960, Tinguely was asked to create a sculpture which would give a performance in front of the Museum of Modern Art’s sculpture garden. Made of wheels and pieces of scrap, Tinguely built the sculpture so that it would self destruct. The machine ‘performed’ in front of a group of specially invited guests for 27 minutes. Once it had destroyed itself, the guests searched through remnants of the sculpture, some of them taking parts home. It has been suggested that the self destruction of the sculpture was symbolic of New York itself, and its ability to be constantly regenerating itself. 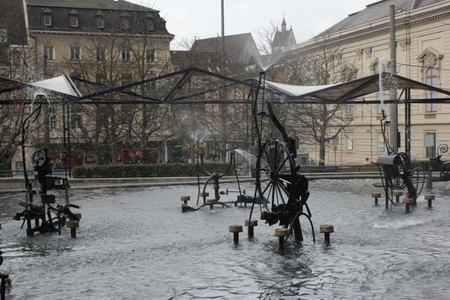 View of Tinguely Fountain | © Tim Sheerman-Chase/flickr
Give us feedback