The Allure of Rolf’s During Christmas 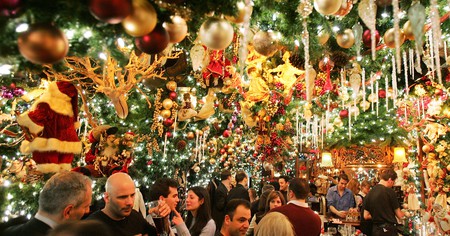 The holiday season in New York City isn’t complete without a visit to Rolf’s, Gramercy’s Christmas paradise. The German restaurant has become known for its over-the-top decorations, rife with thousands of ornaments and twinkling lights, and the overflowing lines of people waiting to get in to take pictures with them.

On a cold, rainy Friday night, a line 50 people deep spills out of Rolf’s, curling around East 22nd Street. Those fearless and patient enough to wait in line in such unforgiving weather pop open umbrellas and hug scarves to their faces, eagerly bouncing from toe to toe. This waiting game isn’t out of the ordinary on this rather average Gramercy corner. After all, this isn’t just any line unspooling outside of a buzzy, stampede-inducing restaurant. This is a line for Rolf’s, New York City’s unofficial Christmas destination.

From November through April, the space is transformed into a winter wonderland, replete with shimmering lights and icicles emerging from the ceiling like stalactites, streams of shiny green, red and silver ornaments twisted with ribbons of leafy pine, and porcelain dolls sporting white dresses, their hair coiffed and curled, perched in corners. There are around 100,000 lights, 15,000 ornaments and 800 dolls filling every inch of the small space. Restaurant manager Suhal Uddin told Business Insider that the decorations can cost nearly $65,000 every year. 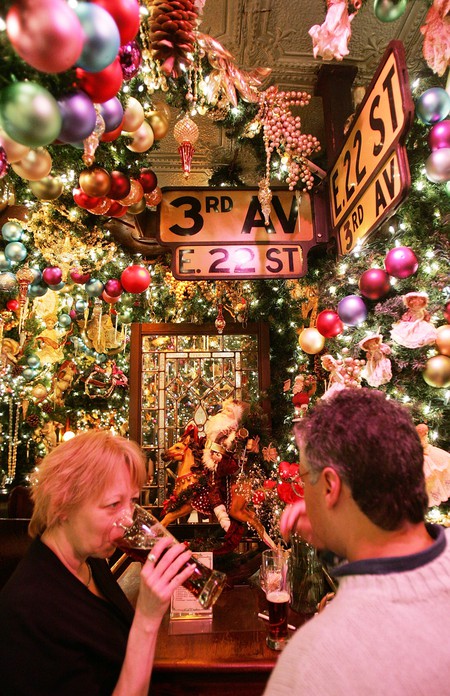 But Rolf’s wasn’t always decked out in this crazed, jolly fashion. The restaurant opened in 1968, home to platters of pounded, breaded schnitzel and overflowing, frothy steins of beer. It was simply a neighborhood spot, catering to locals and Germans looking for a taste of the old country. But after the owner passed away, Robert Maisano, one of Rolf’s employees, slowly began transforming Rolf’s into a Noel-inspired, decorative paradise.

“When you search Christmas in New York City, [Rolf’s] is all over the internet,” says Rachel Mieson, who’s in from out of town, snugly set at the back of the line with her mother. “We came for the weekend, and everyone says it’s a must-see.” The pair has never been to Rolf’s before, but they’re hoping to pass through the front doors before they have to leave for their 8:45pm dinner reservation.

While the food may prove spotty and exorbitantly expensive (schnitzel is billed at $35) and the service rather surly, once you get inside, the restaurant brims with snap-happy tourists and locals of all ages, posing for photos under the twinkle of the illustrious decorations.

“It’s Instagrammable,” Kaitlan Brown says when asked why she’s waiting in line. She’s perched in the middle of the line on East 22nd Street, attempting to dodge the drizzling rain.

Look under the Instagram location tag of Rolf’s, and your feed will burst – not with images of meatloaf and bratwurst but with pictures of friends sipping steins, of couples locking lips, all under the backdrop of a shower of lights and silver ornaments. But, as expected, Instagram can be deceiving. 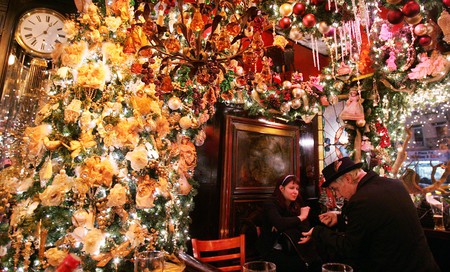 “I don’t think people necessarily hang out all that much,” says Amanda Balsamo, who’s hovering beside Brown. “They’re here for a drink – then on to something else.”

Mieson repeats the same kind of sentiment. “People are here for the Christmas decorations,” she says. “It doesn’t seem to get awesome reviews on their food, but they said the cocktails are good. It’s more for the ambience.”

It’s true. Those waiting without a reservation who make it to the front of the line pop in for a quick, expensive cocktail, snap a couple of photos to be shared later on their Story, then quickly depart without eating. But there are plenty who give up, instantly rendered disgruntled by the long, unmoving line.

“No one will be admitted without an ID,” the bouncer bellows from the door. “You’re looking at 45 minutes until you get in.”

Packs of friends escape the line after just 20 minutes of shivering, peeved that the bouncer continues to make his oft-shouted wait-time announcement. “This is crazy,” one man says, huffing off. “Let’s just go to Molly’s.” The Irish pub, just up the street, is known for burgers and its enticing lack of a line. 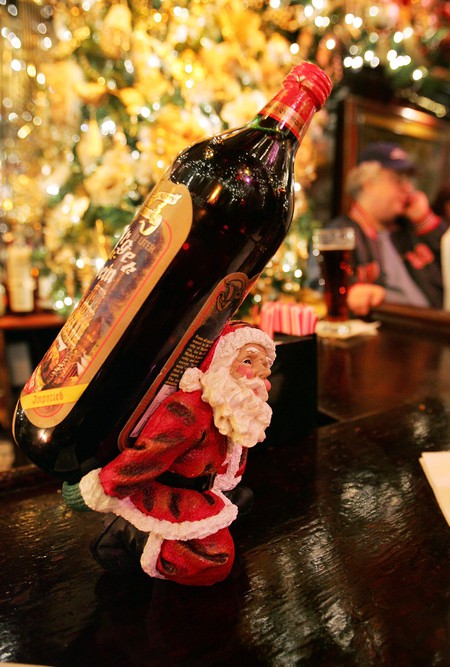 But despite the high price tag for cocktails and the steady stream of people forming a line, Rolf’s retains its reputation as a bona fide destination to celebrate Yuletide cheer. People around the world flock to Rolf’s leading up to the holiday season, yearning to experience Christmas in such a tangible, palpable, photographic manner. Here, nestled under the mounds of dangling lights and flute-playing angels, are people purely upholding and honoring the same shared tradition of Christmas; everyone can congregate at Rolf’s – no matter their background or political views or nationality – to clink glasses overflowing with spiked eggnog and snap photos for Instagram.

“I don’t feel like any place would go this over-the-top gaudy because they might think it’s tacky,” Mieson says. “But [Rolf’s] is pretty cool.”

Though the decorations stay up through the spring, the busiest season at Rolf’s is unsurprisingly from Thanksgiving through January. Once the new year hits, the lines taper off, and Rolf’s returns to cranking out unmemorable portions of beef stew and potato salad. But even after December has long passed, the ribbons of verdant pine and teardrop lights still glimmer above the booths in the spring, a reminder that Christmas can always be celebrated at Rolf’s. 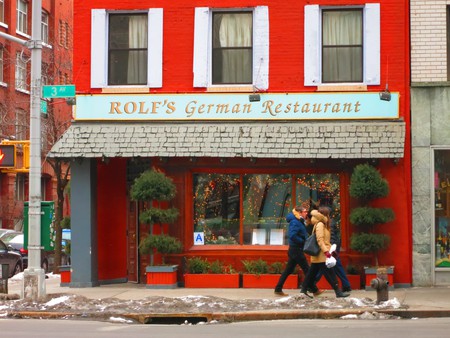 A group of friends passing Rolf's German Restaurant on 3rd Avenue in Manhattan. | © Heather Shimmin / Shutterstock
Give us feedback