The 10 Most Memorable Movie Theme Songs 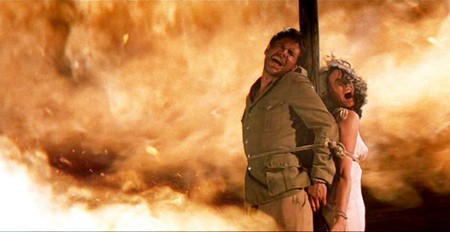 We compiled a list of some of the most memorable movie theme songs of the recent decades. Needless to say, there are many more fantastic themes that have been composed exclusively for feature films, but here are some of our favorites. Hope you enjoy them, too!

The third James Bond movie featuring Sean Connery as 007 was released in 1964. The theme of the movie is performed by Shirley Bassey and provided the artist her only entry into the Billboard Hot 100. The film itself was favorably received and Goldfinger was indeed the first Bond feature to receive an Academy Award for Best Sound Effects.

Ghostbusters, a supernatural comedy film from 1984 by director Ivan Reitman, instantly became a box-office hit and so did the original song and the movies’ theme, performed by Ray Parker, Jr. The song was nominated for the Best Original Song Award at the 57th Academy Awards but sadly lost to The Woman in Red.

Spielberg’s successful feature film won several international awards and landmarked computer-based imagery used in movie production. Jurassic Park has been praised by critics worldwide for its special effects, for Spielberg’s direction and without a doubt, for John Williams‘ musical score.

The theme song from Martin Scorsese‘s film New York, New York (1977) was originally performed by the main actress of the movie, Liza Minnelli. Frank Sinatra recorded the song in 1979, and it has ever since been recognized not only as the theme for the movie but also as one of the most important and famous songs about New York City of all times.

A good old spaghetti Western from legendary director Sergio Leoni, The Good, The Bad and The Ugly was the third and the final part of Leoni’s Dollars Trilogy. The theme music of the movie was composed by Ennio Morricone, a world-renowned composer and musician having composed movie music for over 500 films and TV series.

‘Flashdance… What a feeling’, performed by Irene Cara, is no doubt one of the most iconic songs throughout the history of American cinema music. The song was recorded in 1983, and it won an Academy Award for the Best Original Song and was repeatedly ranked as #1 in diverse single charts globally. What a feeling indeed!

Did you know that Howard Shore, who composed and produced as well as orchestrated the music for The Lord of the Rings trilogy, used Middle-Earth’s own languages in the vocal parts of the score? Both The Fellowship of the Ring as well as The Return of the King received Academy Awards for the best score, and the latter also won an award for The Best Original Song.

Composed by John Williams, the theme of Indiana Jones is one of the most recognizable movie theme songs of all times. Also known as ‘Raiders March’, it was first released in the motion picture soundtrack of Raiders of the Lost Ark in 1981 – an absolute classic from the ’80s. As Indy puts it: ‘It’s not the years, honey. It’s the mileage.‘

Quentin Tarantino’s success feature introduced an unique soundtrack. With many of the songs being suggested by Tarantino’s friends, the album ended up combining rock ‘n’ roll, surf rock, pop and soul music. Dick Dale’s ‘Misirlou’, a song playing during the opening credits of the film, is one of the most recognizable tracks of the soundtrack, and it reached #21 on the Billboard 200 in 1994. A classic of its genre and very Pulp Fiction-y.

If you have never listened to the soundtrack of the classic adventure-feature Back to the Future, now is your chance. After the release of the soundtrack, Huey Lewis and the News’ song ‘The Power of Love‘ rocketed to the top of the US Billboard Hot 100 at #1 and was nominated for an Academy Award for The Best Original Song. The above video clip is, however, the very theme song of the film, composed by Alan Silvestri and performed by the Radio Symphony Orchestra of Vienna.