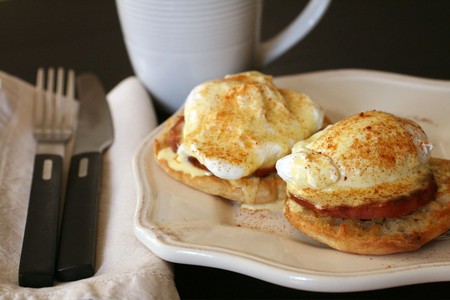 Featuring lush greenery, sleek plazas, and scenic views of the Hudson River, Battery Park City feels like a suburban oasis compared to the clamor of the surrounding city. Tucked in the southwestern corner of Manhattan between the Financial District and the harbor, this 92-acre residential community is replete with upscale restaurants offering delicious brunch specials. Whether you’re looking for something new and exciting or just some good old fashioned eggs, we’ve rounded up 10 delicious local brunch spots to try.

Danny Meyer’s North End Grill combines French-inspired cooking and seafood to create a menu ‘infused with subtle smoke from the restaurant’s wood-burning grills and mesquite charcoal ovens.’ Brunch is served on Saturday and Sunday. Diners can choose from a selection of house-made pastries and charcuterie, and enjoy a classic raw bar comprised of a variety of shellfish and smoked salmon. Seasonal produce garnered from the restaurant’s rooftop farm delivers a fusion of flavors and spices that are present in every bite. The sleek and chic setting, paired with a warm and proficient staff, makes for an exceptional dining experience.

Blue Smoke is perfect for folks who crave soul food at any time of the day. Its menu honors the culinary traditions of the American South ‘with a selection of smoked meats, fresh produce, and thoughtfully sourced ingredients.’ Brunch time appetizers include cornbread madeleines, deviled eggs, roasted oysters in smoked garlic butter and green peppers, and warm, fluffy buttermilk biscuits. Its main menu includes America’s favorite classics. Fried chicken, bacon cheeseburger and a breakfast burrito made with eggs, maple smoked cheddar, potatoes and your choice of bacon, chopped barbecue or sausage. To complement this Southern meal, choose from a variety of ‘fixins,’ which include collard greens, fried potato wedges and buttery grits. 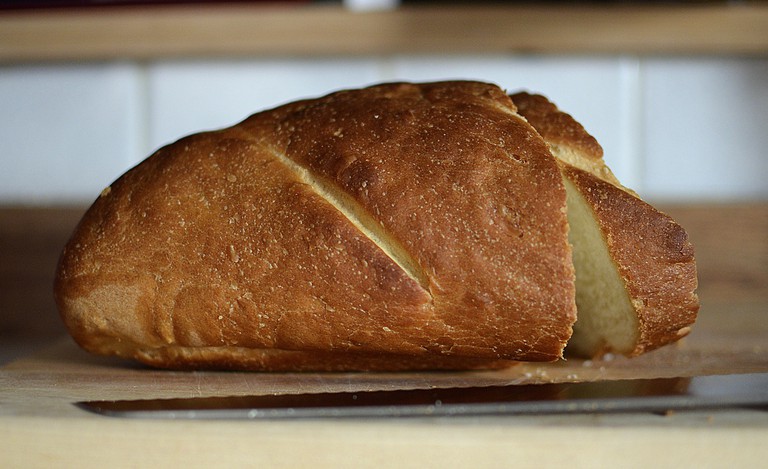 Bread | © M Dreibelbis/Flickr
This quaint bakery is tucked around the corner from the World Financial Center, making it an ideal location to enjoy a meal along the waterfront without the busy interruption of city life. French for ‘the daily bread,’ Le Pain Quotidien serves handmade bread baked daily, served with organic butter, jam, and spreads. In addition, it offers homemade granola-topped organic yogurt, a variety of omelettes, vegan soup, grilled chicken cobb salad, and roasted turkey and avocado tartine. The restaurant prides itself on its philosophy of using simple, organic ingredients to bring people together. A mix of large and small wooden tables inside combined with outdoor seating and views of the river create an inviting setting and peaceful ambiance, which is perfect for meeting with friends or colleagues.

P.J. Clarke’s On The Hudson 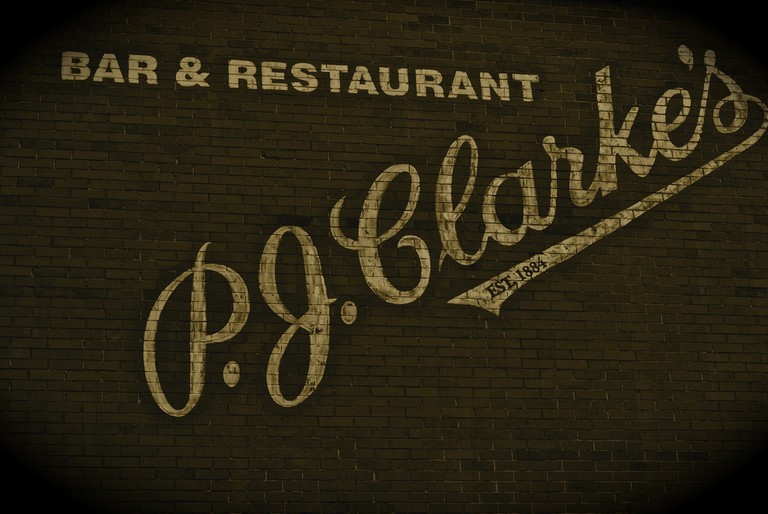 PJ Clarke's. Mmmmmm. | © raphaelstrada/Flickr
P.J. Clarke’s is one of the most legendary bars and burger joints in New York City due to its unwavering devotion to quality food and friendly service. In addition, this place has survived two World Wars, the Depression, and the Prohibition Era, making it one of the city’s most historically significant venues. Throughout history, musicians, celebutantes, and important public figures have passed through P.J. Clarke’s. As its website boasts, ‘This is the place where Jackie Kennedy brought John Jr. and Caroline for lunch on Saturdays. This is where Buddy Holly proposed to his wife before a stunned crowd, where Frank Sinatra ended his nights on the town, where singer Johnny Mercer penned the hit song, ‘One for My Baby,’ and where Nat King Cole famously bit into a cheeseburger and declared it ‘The Cadillac of burgers,’ establishing what would become P.J. Clarke’s signature dish. There are six locations worldwide, but this spot has a spectacular waterfront dining area, masterful bartenders, a classic vibe, and a menu of assorted dishes that include delicious burgers and a raw bar.

Restaurant, American, $$$
Facebook
Email
Twitter
Pinterest
Copy link
Share
Map View
It may be small in size, but Olive’s freshly prepared food is packed with big flavor. This tiny restaurant is popular for its gourmet soups, wholesome salads and inventive sandwiches that are made fresh to take away. It’s the perfect on-the-go brunch spot for those who ‘have little time in the middle of the day to linger over a long lunch.’ The menu changes with the season and features daily specials such as avocado toast, tomato fennel soup with basmati rice, and quiche with roasted peppers and mixed greens, to name a few. Olive’s is located on the second floor of Brookfield Place at the entrance of the Hudson Eats suite. 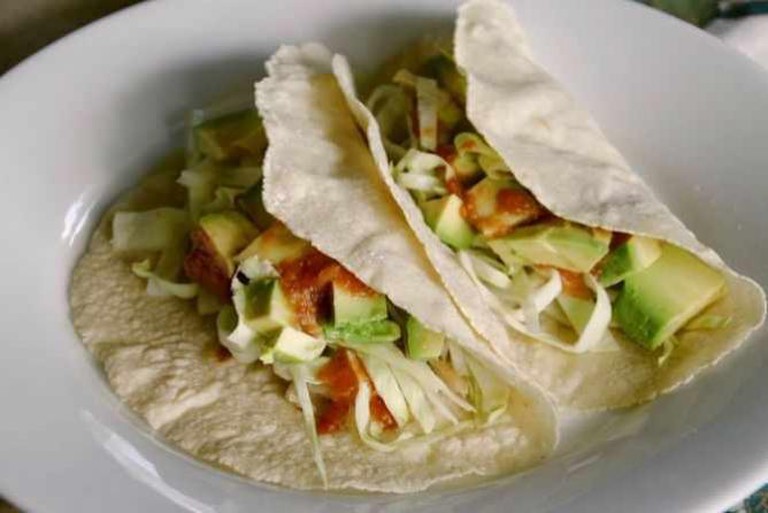 baja fish tacos | © Stacy/Flickr
This American bistro offers breathtaking views of the Hudson River and the Statue of Liberty with its large windows and two outdoor terraces. The décor features blue checkered table cloths and a copper top bar, which when combined with the spacious setting, creates a relaxed, family-friendly atmosphere. Merchants River House has an expansive brunch menu of classic American fare. Among some of the diners’ favorites are the chicken and bacon mac and cheese and the signature burger, the latter consisting of certified Angus beef and applewood-smoked bacon. 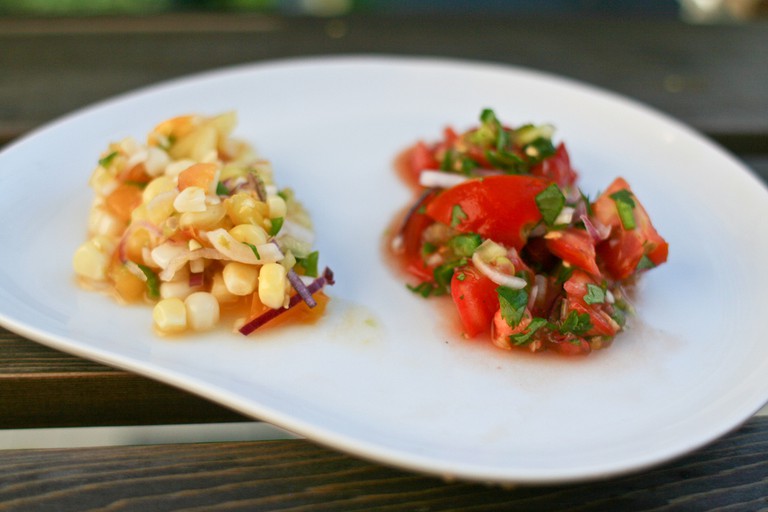 Salsa | © Taz/Flickr
El Vez is a trendy Mexican restaurant and bar named after Robert Lopez, a Mexican-American singer-songwriter better known as ‘the Mexican Elvis.’ To honor the musician’s colorful shows, the restaurant explodes with bright hues from every corner. Its décor features festive furnishings, varicolored walls and strings of lights that hang above the heads of diners, creating an upbeat climate. Brunch is served on Saturday and Sunday. The menu consists of guacamole, a trio of ceviches, and other cross-cultural staples like tuna tostadas and smoked salmon benedict. The restaurant’s ‘Macho Nachos,’ made with melted jack cheese, black beans, salsa ranchera, jalapeño, onion, chorizo and sour cream, are a particular crowd favorite. Although the food portions are relatively small, El Vez offers over 100 tequilas and mixed drinks, making it the ideal venue to kick back at for some drinks with friends. 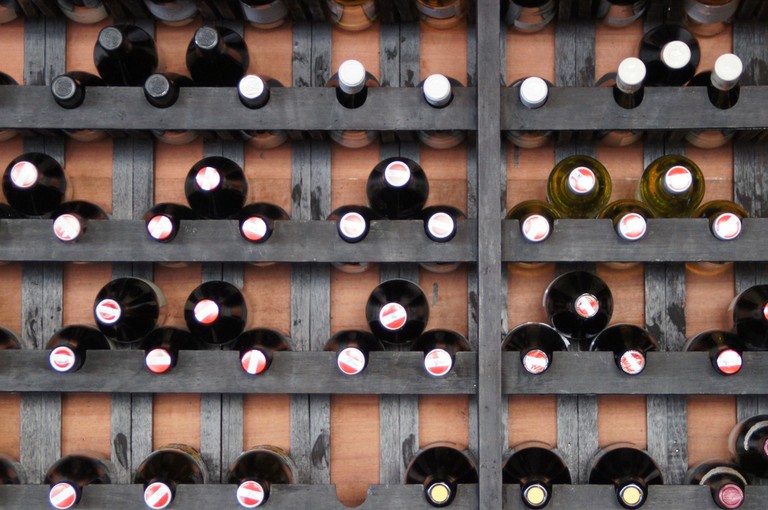 Wine tasting | © Fredrik Rubensson/Flickr
Located inside the dining hall of the Ritz-Carlton, 2West is a high-end restaurant with stunning views of the harbor. The contemporary décor, quiet setting, and exceptional service make this an ideal place to seal a business deal or impress a special date. The restaurant serves New American fare in a variety of comfort foods and delicious desserts. Each dish is expertly crafted and delivered to the table in a simple presentation. Some of the more popular menu options are horseradish-crusted salmon, bacon-wrapped filet mignon, and truffle parmesan fries. Brunch is offered on the weekends. An impressive wine list is guaranteed to complement almost any meal. 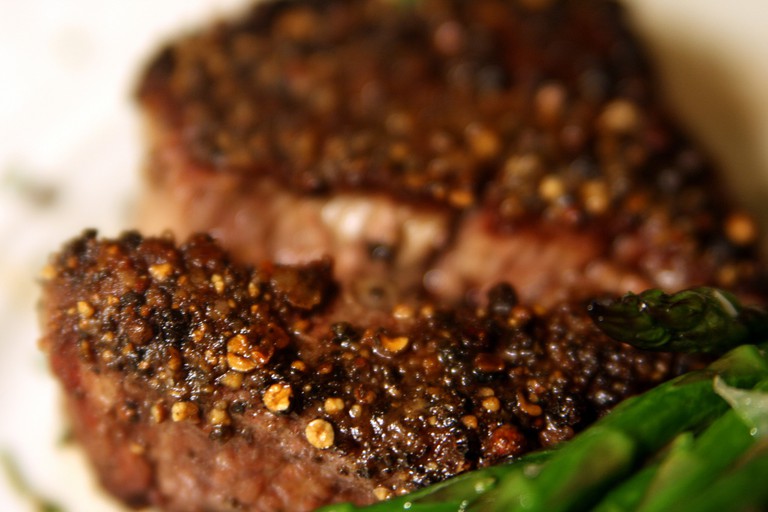 Filet mignon | © Quinn Dombrowski/Flickr
Taste the flavors of Turkey, Greece and Italy at this upscale waterfront restaurant. Miramar offers delicious Mediterranean seafood, chicken, and steaks that are expertly prepared and served fresh. An array of refreshing salads and hot soups are offered each day along with a variety of wraps, sandwiches, and paninis. The restaurant’s seafood entrées include lobster ravioli, wild caught salmon, tilapia almondine, and jumbo shrimp stuffed with crab meat, onions, peppers, and herbs. The chicken and beef entrées include a variety of kabobs and a chargrilled rib-eye steak. Miramar serves big portions packed with flavor that diners can enjoy in a quiet, contemporary setting.

Cafe, Pastries, $$$
Facebook
Email
Twitter
Pinterest
Copy link
Share
Map View
This small café is a ‘deliciously unexpected treat in Battery Park City.’ Customers can enjoy a selection of espresso drinks, breakfast pastries, paninis, and refreshing salads without breaking the bank. Inatteso’s house-baked desserts, like the sweet Nutella mousse cake and the limoncello tart, satisfy the sweet tooth. Other essential breakfast provisions, like the chocolate croissant and an oatmeal-cranberry scone, meet the basic needs of New York City’s busy passersby. Diners walk into a sleek, modern space and a warm, friendly atmosphere. Outdoor seating is available along a beautiful bike path with views of the One World Trade Center and other downtown buildings.
Give us feedback