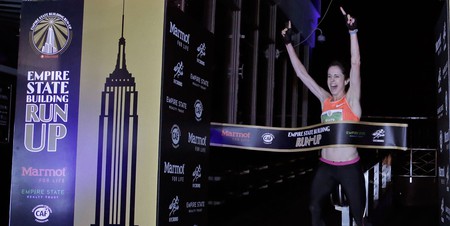 More than 10 years ago Suzy Walsham relocated to Singapore for her job at Symantec Corporation. She heard about a local race running up the steps of a hotel. The top prize was a trip to New York City and entry in the Empire State Building Run Up, an annual race ascending the iconic building’s 1,576 stairs (86 flights).

Walsham won in Singapore, went to New York and won there, too. In fact, she’s the winningest runner in Empire State Building Run Up history, claiming first place eight times, including most recently in the event’s 40th edition on Feb. 1.

“I was hooked from day one,” she said.

Walsham is a professional tower runner. She travels around the globe to run up stairs. Towerrunning, also known as stair racing, is a sport where participants race up towers, skyscrapers and outdoor stairs in competition. According to the Towerrunning World Association, the sport’s international governing body, more than 140,000 athletes and running enthusiasts participate in its events each year around the world. In 2015, 250 races were held in 55 countries; there are 130 races scheduled so far this year.

Like many other tower runners, the Australian prefers training in actual staircases as opposed to the StairMaster. Singapore, like New York City, is littered with tall buildings — a playground for runners like Walsham. In fact, she trains in her own building — a 30-story condo.

“Living in Singapore has its benefits with the number of buildings I have access to,” she said. “I can tailor my training based on the race I have coming up.”

Walsham has been the top woman tower runner the past five years and was the 2016 Towerrunning World Champion. She won 69 of the 80 races she entered since her first race in Singapore to the 2017 ESB Run Up, but don’t refer to her dominance as a dynasty.

“I don’t know about that,” she said with a smile after her record-breaking win in NYC. “The race is never going to get easier, it’s how you manage it. The negative is the more races you win, the expectation grows, so that’s added pressure you have to manage as well.”