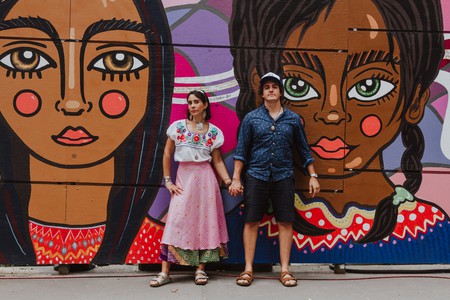 Leading up to the 17th anniversary of 9/11, wife-husband duo Chinon Maria and Sebastian Mitre discuss their large-scale mural near the World Trade Center campus and how it delivers a message of unity. 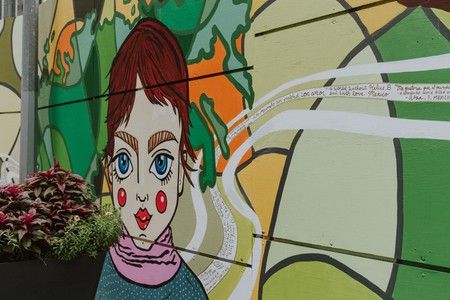 A section of the 'One World, Our Children' mural | © Rachel Thalia / Culture Trip

Perhaps the most emotionally charged place in New York City, the World Trade Center campus continues to undergo a revitalizing transformation. Ascending the stairs of the Oculus or coming out of the subway at the recently reopened Cortlandt Street station, the solemn weight of a mournful history is still felt, even amid the glittering, colossal new skyscrapers. But what once was a literal hole in the earth, devoid of joy for so long, is coming alive again with not only new construction, but also colorful creations that bring a sense of hope and artistic vitality to the area.

While art can’t erase a painful history, it does have a transformative power, offering a little bit of joy – and quite possibly a touch of healing – in what remain divisive times. 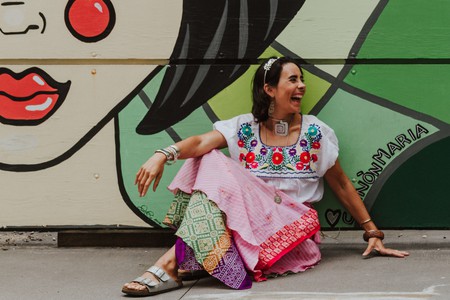 Maria in front of the mural | © Rachel Thalia / Culture Trip 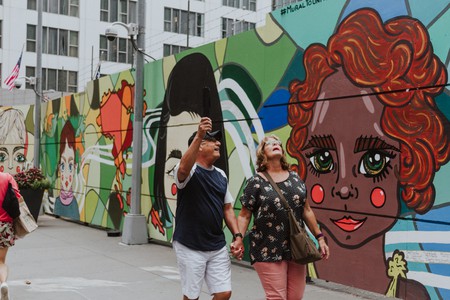 Chinon Maria and Sebastian Mitre’s mural One World, Our Children at 5 WTC features the faces of nine refugee girls from all over the world. The 224ft (68.27m) wall was commissioned by the president of the Downtown Alliance after she saw Chinon’s mural work on the 69th floor of Silverstein Properties’ 4 WTC. Less than a block away from the 9/11 Memorial, the vibrant mural adds bursts of color to a wall that for nearly 10 years stood somberly blank. 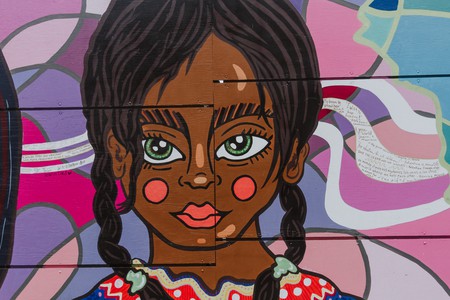 “It’s a very hopeful, inspiring piece because we worked with over 1,400 children globally to incorporate their words and their dreams for the future of the world into the piece, as well,” Chinon says. “It’s a very uplifting message.” 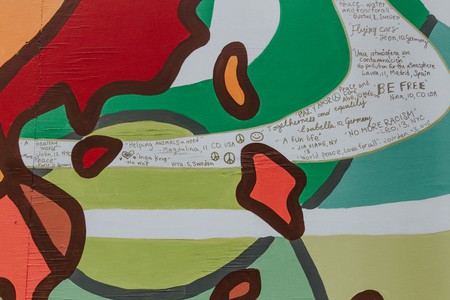 Some of the children's "uplifting messages" | © Rachel Thalia / Culture Trip

“And that’s what makes us the most proud,” Sebastian says. “Because it’s about refugee girls. It took us a month to paint it. The wall where we painted was the original entrance to the 9/11 Memorial when it was just a hole with gates. And now you see this rainbow of smiles.”

Adding a playful, cheerful energy to the site – especially with the contentious issue of immigration at hand – ran the risk of seeming irreverent, but the community received the mural with gratitude. 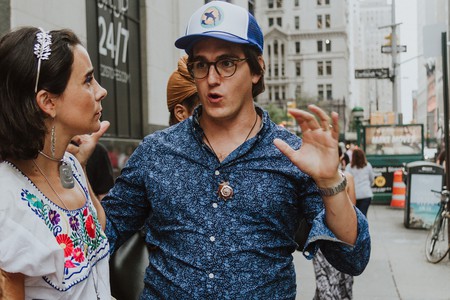 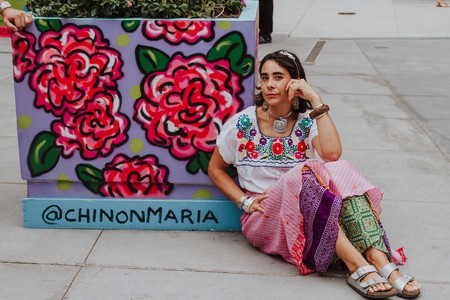 Maria: "Art is healing and can unite us together” | © Rachel Thalia / Culture Trip

“At first, we were a little intimidated and nervous,” Sebastian says. “We’re painting happy colors where a big tragedy happened. Are people going to get offended? But it was the complete opposite. We had such a positive reaction [from] everyone – cheering us on, getting very excited.

“There was this beautiful moment when this lady approached us with tears in her eyes and said, ‘I lost people that day and this fills me with light and hope.’” 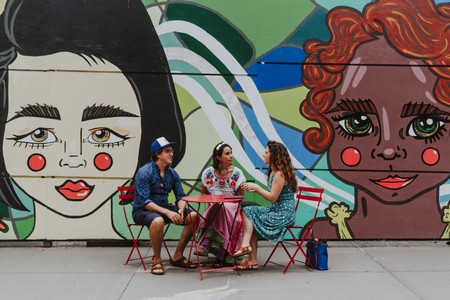 The duo also highlights the privilege and responsibility of creating a large-scale work of art in such a sacred New York City site. “As public artists, we’re given a chance to paint in a place that means so much to all of us, and we wanted to communicate a message of hope,” Sebastian says. “We thought, ‘What better way than to focus on colors and [be] playful, and invite people to become like a child?’” 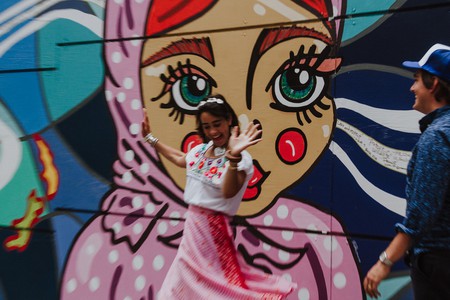 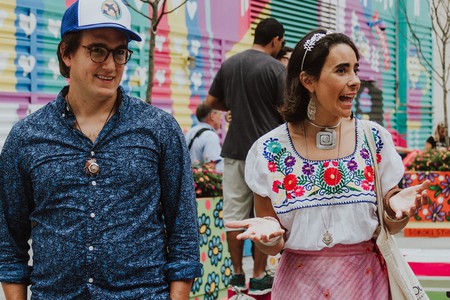 September 11 wasn’t only a New York tragedy; it was a tragedy for all of humanity. It traversed borders and changed the socio-political landscape around the globe. In 2018, the need for understanding and compassion is more necessary than ever, and public space, as well as public art, can play a profound role in this unification. 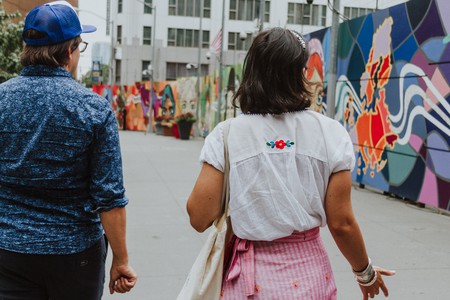 “The World Trade Center could see that public art can be brought to this space,” Maria says. “They saw this positive reaction and influence in the area that was really in need. A lot of artists feel that art is healing and can unite us together.”

The title for their most prominent mural in the area is stems from the immigration crisis at hand. “These children are crossing borders with no parents, no documents – who do they belong to? They’re all of ours,” Sebastian says. “It’s a worldwide effort because, right now, it’s a huge humanitarian crisis. We see the figures in the news, but we’re bringing faces to it.” 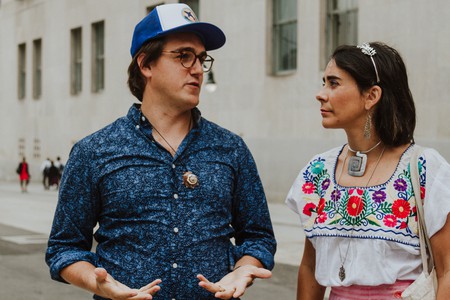 Mitre: "We wanted to communicate a message of hope” | © Rachel Thalia / Culture Trip

“The people that come from Asia … They see the Asian girl, they get very excited and they go and take their selfie there. It’s like one world,” Sebastian continues.

The artist couple sees the World Trade Center public art project as a positive shift towards bridging the gap between the corporate and art worlds – ones that historically have been long divided and misunderstood.

“I think we also understand that we are pioneers, in [that] way,” Sebastian says. “Artists dealing with corporate worlds. And we realize that it’s a privilege to be on the world’s stage. For us, this is a very, very important space,” Sebastian says. 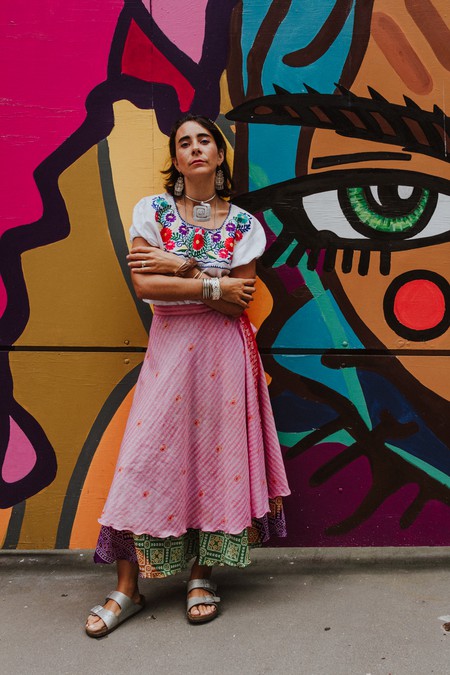 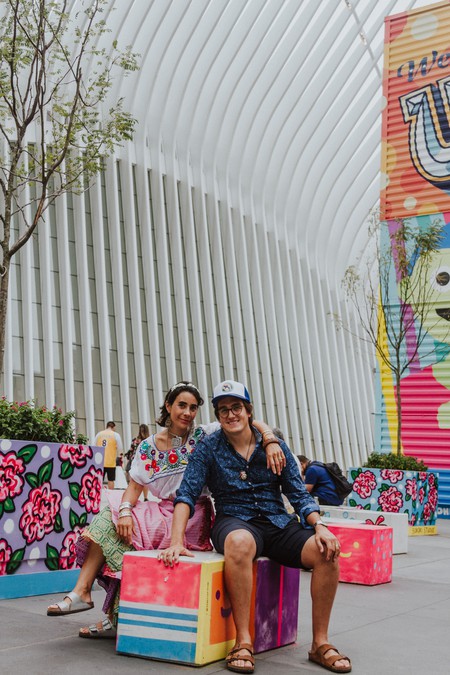 “We’re socially committed, and we’re aware. And we’re living in a very difficult time. What we need more than ever right now are smiles, connection and community,” Sebastian says. 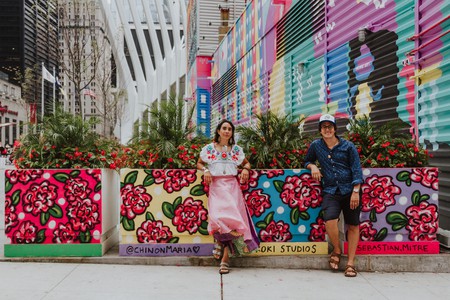