The ambience of David Bowie‘s 1969 stranded astronaut anthem is light years from that of Todd Haynes’s upcoming Wonderstruck. Yet it proves a shrewd choice for the film’s trailer, which sells the twinned stories of a runaway girl and boy who are spiritually connected but separated in time by 50 years.

It is a little early for the Oscar race to be heating up, but two occurrences this week have at least taken the awards out of cold storage.

The critical acclaim for Christopher Nolan’s Dunkirk has made it the first shoo-in for a Best Picture nomination. On the eve of its U.S. release, however, the issuing of the teaser trailer for Todd Haynes’ Wonderstruck, adapted by Brian Selznick from his illustrated young-adult novel, fired a shot across the war film’s bows. 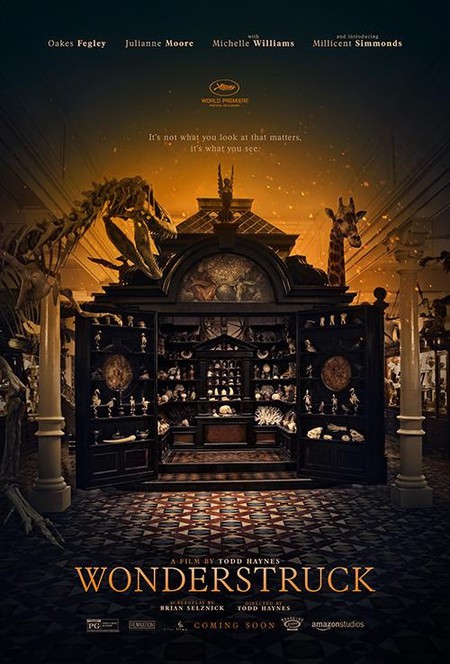 Haynes’ film, made for Amazon Studios, is now a big Oscar contender in its own right. Critics who saw it at Cannes have reported that Wonderstruck is a classy, sumptuous, soul-tugging film for everyone, not just kids. The 2011 movie of Selznick’s The Invention of Hugo Cabret was too, though Martin Scorsese naturally filmed it in a different visual register.

The Wonderstruck trailer, intermittently kaleidoscopic, gives a strong sense of the journeys taken by Rose (Millicent Simmonds), in 1927, and Ben (Oakes Fegley), in 1977; two mysterious women (played by Julianne Moore) compound the intrigue.

Each child exudes a palpable sense of grief and hurt. Each strand has a “cabinet of wonders” vibe. As the kids go on their individual journeys of self-discovery, the acts of looking and absorbing play a role in their healing—notice the shots of Rose and Ben peeping and peering.

Haynes amps up the trailer’s power considerably with the use of David Bowie’s “Space Oddity.” The song is introduced with the familiar ominous strumming before a school choir sings “Ground Control to Major Tom/Take Your protein pills and put your helmet on.”

Then Bowie launches into the first verse as a montage shows Millicent and Ben making their awestruck first forays on the streets of New York and to the American Natural History Museum. Echoing shots of Millicent and Ben touching the same meteorite may have given Haynes the idea of using “Space Oddity.” It’s as if Major Tom is hovering invisibly over these tykes….

Teasingly anachronistic when laid over the scenes of hearing-impaired Millicent, which cinematographer Edward Lachman shot like a black and white 1920s silent movie, the song gives the trailer enormous emotional force. It even makes Ben (as pictured above) start to look like a junior version of Bowie around 1964, when he was plain old David Jones.

It remains to be seen how much late 60s–70s music, if any, glam-rock fan Haynes (Velvet Goldmine) uses in the actual Wonderstruck movie.

Amazon Studios and Roadside Attractions will release Wonderstruck in theaters on October 20, 2017.