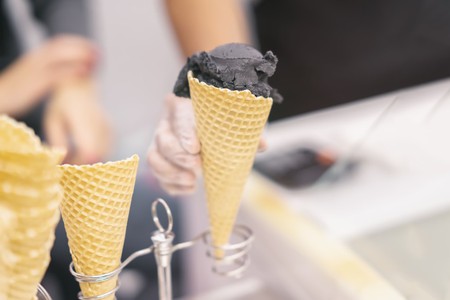 You'll no longer be seeing black ice cream in your Instagram feed | © Svetlana.Is/Shutterstock

It’s the end of an era for NYC’s beloved black foods. The New York City Department of Health and Mental Hygiene announced that activated charcoal—the ingredient behind transforming bland-colored food and drinks into black, highly Instagrammable grub—can no longer be added into food or drinks.

The ban comes from the U.S. Food and Drug Administration (FDA). In a statement, the Department of Health explained that activated charcoal is “prohibited by the U.S. Food and Drug Administration (FDA) as a food additive or food coloring agent.” The crackdown has negatively affected a host of restaurants, cafés, and ice cream parlors who relied on the steady business of health fanatics and social media-savvy millennials.

Over the past couple of years, the explosion of what has since been dubbed goth food has become pervasive throughout the city, popping up in cocktails, burger buns, juices, and pizza crust. In the age of Instagram, it’s no surprise the trend took off; for those used to the bright colors of vegetables, black food is certainly adequately unnatural-looking to capture the attention, and likes, of Instagram users.

Activated charcoal is a black powder created from a mix of coconut shells, peat, petroleum coke, bone char, coal, olive pits, or sawdust. It becomes “activated” when it’s processed at very high temperatures; the elevated heat ultimately alters its internal structure. These days, the powder is added to everything from face masks to teeth whitening toothpastes, reportedly cleansing us of toxins, helping overcome hangovers, and reducing cholesterol levels.

Despite these seemingly healthy reports, it seems like including activated charcoal in food and drinks has been banned for several years. Eater NY reports that over the past couple of years the Department of Health has submitted orders to “compel restaurant operators to discard the product as it is considered adulterated food.” 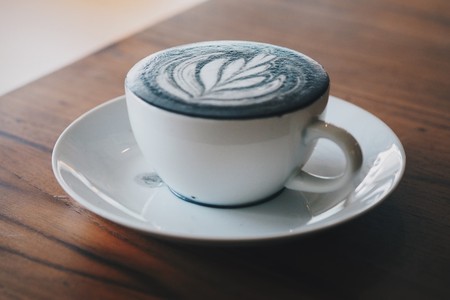 Your teeth may have turned black from charcoal lattes, but they were still all the rage | © little star/Shutterstock

But many places were unaware of the rule; it was only through recent health inspections that New York restaurants were instructed to stop using the coloring ingredient. The reason? For the most part, it appears that ingesting too much activated charcoal could result in dire consequences, like malnutrition, dehydration, and constipation. Plus, the stuff occasionally prevents the body from absorbing medication.

The news has stumped many businesses throughout the city. At Morgenstern’s Finest Ice Cream—an ice cream parlor on the Lower East Side which jump-started the black ice cream trend—the team had to scrap $3,000 worth of activated charcoal which had been integral for the inky black coconut ash ice cream. The same happened at Round K, a coffee shop known for its activated charcoal latte. Round K was forced to quit selling the drink, and two five-pound bags of the stuff were confiscated.

The introduction of black foods certainly resulted in a huge popularity boost for many small businesses; lines spilled out of Morgenstern’s after the release of the coconut ash ice cream. Now, places whose livelihood relied on these sales are understandably worried. Round K has concocted a new product, having switched over to selling a matte black 2 latte (it features coffee beans that are roasted until charred instead of coconut ash).

So while NYC may no longer flaunt a myriad of curated, eye-catching goth food as black as your heart, there’s still plenty of unicorn food, over-the-top milkshakes, and oversized cookies to cure those blues.