Salt Bae Is Opening a Restaurant in New York City 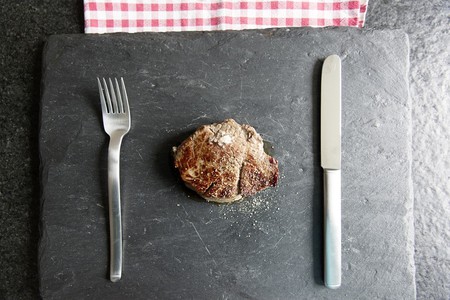 Memes have to eat too! For internet sensation Salt Bae, whipping up a global online fanbase isn’t enough: the chef-turned-celebrity is bringing his Turkish steakhouse chain Nusr-Et (and his dramatic seasoning techniques) to New York City.

Now the subject of a viral internet meme, Nusret Gokce is no overnight sensation. In 2010, the 35-year-old multi-hyphenate parlayed his insights as a butcher into a successful chain of steakhouses in Turkey and the Middle East. Though better known for his flamboyant seasoning technique which earned him his nickname (watch the video that started it all here), Gokce is, in fact, a flourishing restaurateur with 12 international locations and counting.

The New York City outpost will mark Nusr-Et’s 13th installation. Given its prime location on 53rd Street near Sixth Avenue in Manhattan, not to mention its chef’s popularity, the restaurant’s success is all but guaranteed. However, the 150-seat eatery will pack some surprises, beginning with its menu. For starters, the only Turkish treats at this Turkey import are its baklava dessert, coffee, and tea.

Nusr-Et will speak the cross-cultural language of steakhouse cuisine, accented, of course, with Salt Bae’s flair. Diners can expect whole racks of lamb, specialty cuts such as Lokum, signature beef and veal burgers, and beef carpaccio, all cut table-side for you. A reminder that your meat comes by way of a meme, a blown-up image of Salt Bae caught in his signature seasoning move watches over the restaurant—and any diners who dare to reach for the salt shaker.