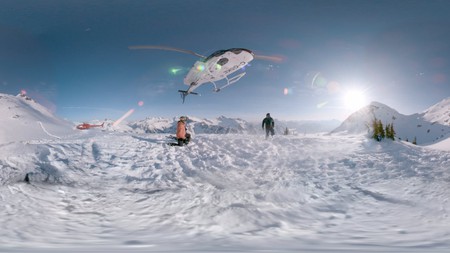 Screenshot from 'The Anatomy of Ski'4K film | © Hidden Content / Samsung

Feel the rush of skiing down the slopes of the Canadian Rockies in The Anatomy of Ski, an immersive reality film from Samsung and VR studio Hidden Content.

Lake Louise, a hamlet in Banff National Park in the Canadian Rockies, is known for its turquoise, glacier-fed lake, high peaks and stately chateau. Hiking trails wind up to the Lake Agnes Tea House for bird’s-eye views. There’s a canoe dock in summer, a skating rink on the frozen lake in winter, and the Lake Louise Ski Resort, home to spectacular scenery, 4,200 acres of skiable terrain and four mountain faces.

It’s against this wintry backdrop that Bode Miller, the most successful American skier of all time, regularly reaches speeds of more than 75mph while barrelling down cliff-face race courses. The winner of six Olympic medals, four World Championship titles and two World Cup championships, Miller officially retired from ski racing in October 2017 – but now, he’s teamed up with Samsung and VR studio Hidden Content to create the immersive film The Anatomy of Ski.

Shot with a helmet camera, the 4K film follows Miller as he races down a snowy alpine race course. Barreling between turning gates, the viewer is placed squarely in the athlete’s boots, and the first-person point of view footage can be clicked and dragged for 360-degree views of the course and the scenery.

Showcasing the storytelling possibilities of virtual reality, The Anatomy of Ski lets anyone ski virtually alongside Miller, demonstrating tech’s potential to make even the most extreme experiences on Earth accessible to anyone, anywhere.

SAMSUNG VR – The Anatomy of Ski w/ Bode Miller from HIDDEN on Vimeo.

The Anatomy of Ski is currently open to the public as an installation at Samsung 837, the brand’s showcase studio, in New York City.

Inspired by this story? Read more about the new storytelling frontier of virtual reality or browse our guide to the best of Banff.