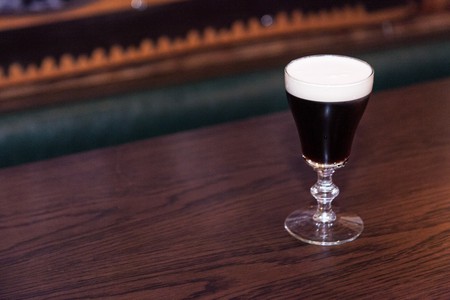 In the depths of winter, the best way to get caffeinated is with a boozy drink.

It’s midwinter in NYC. The January doldrums are in full force; we’re all feeling sluggish and slow and cold. The solution: caffeinated hot cocktails, guaranteed to both warm you up and perk you up. We’ve told you where to warm up with hot toddies and other hot cocktails, and now we’ll let on where to find our favorite hot coffee- and tea-based cocktails for a warm, boozy jolt of caffeine.

Meanwhile, Back At the Lodge at Extra Fancy

Evoke some apres-ski action with Extra Fancy’s minty and warm “Meanwhile, Back At the Lodge,” blending Hennessy VS cognac, Branca Menta, coffee, and absinthe-spiked whipped cream.

Irish Coffee at The Dead Rabbit

The Dead Rabbit is said to make the best Irish Coffee in the world, and we won’t disagree. The recipe was recently revamped by legendary bartender Dale DeGroff. His recipe uses Clontarf Irish whiskey, Birch coffee, demerara syrup, whipped heavy cream, and a sprinkle of freshly grated nutmeg.

Combining aged Panamanian rum, nutty Frangelico, and espresso, and topped with with vanilla cream and a blend of winter spices, the Calypso Coffee at Greenwich Village fave Dante will leave you dreaming of warmer climes.

The festive Koffie Van Brunt at Fort Defiance, which combines aged rum, Cherry Heering, and coffee with a cream float, is on its way to becoming a modern classic.

Cowboy Coffee at Après at The Knick

St. Cloud Social, the bar atop The Knickerbocker Hotel, has been transformed into seasonal pop-up Après at The Knick. It’s offering an array of hot drinks in lodge-style surrounds, including the Cowboy Coffee: Guatemalan coffee, anejo tequila, Angostura, cinnamon, and maple.

Duke of Suffolk at Suffolk Arms

Made with gin, a blend of Earl Gray and English Breakfast teas, and topped with cream, the Duke of Suffolk is a signature drink at Suffolk Arms—its refined and floral answer to Irish coffee.

. Respect is not gained, it’s earned. Duke of Suffolk. . Fords Gin English breakfast and Earl Grey Tea Cream & Sugar. Good Morning. . Make sure to check out the Twin Lions Cocktail book by going to the link in our bio. There you’ll find recipes to this and many other drinks for you to make, recreate, and enjoy. . #suffolkarms #cocktailsofsuffolk #suffolkcocktails #twinlions #DukeofSuffolk