Peace, Love and Music: The Legacy of Woodstock 50 Years Later 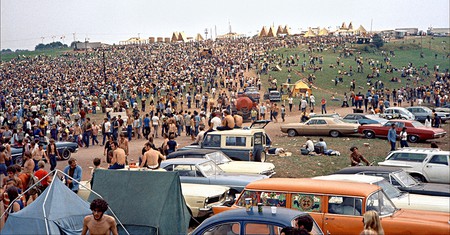 The spirit of Woodstock lives on 50 years after the legendary festival, through evocative exhibits that resonate with 2019’s socially progressive mood.

By all accounts the original Woodstock was a kind of Fyre Festival for the Age of Aquarius. A last-minute change of venues set the planning and construction back irreparably. The number of attendees exceeded turnout estimates by approximately 350,000, causing potentially disastrous food shortages and traffic so bad the performers had to be shuttled to the site by helicopter. To top it all off, it rained torrentially that weekend, turning the fields into a gooey mudbath. By the time the festival wrapped on Monday, August 18, 1969, the organizers were $1 million in the hole and facing 70 lawsuits. But despite the logistical nightmares, Woodstock is still celebrated as a moment of musical legend and historical significance, a testament to the open-hearted mood of the era. Unlike at 2017’s Fyre Festival, where an island of wealthy millennials argued over tents and lamented soggy cheese sandwiches, the underprepared crowds of Woodstock pulled together in a display of generosity and oneness. 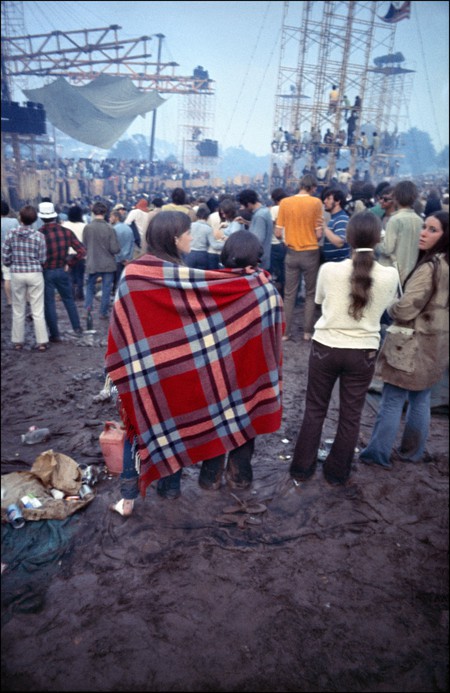 It may have been a good time, but it wasn’t the best weather | © Elliott Landy/Magnum Photos

“It was very much a place where no one had control, and the success of it depended on the integrity and the altruism and the goodwill of the people there,” says Elliott Landy, whose photographs of Woodstock helped ensure the festival’s legacy and captivated generations. “Under dire circumstances, when there really wasn’t enough food or enough shelter, it was raining and muddy and cold, people found that through sharing and caring for each other everything worked out.”

Landy made a name for himself through work that aligned with the activist spirit of 1960s America. Even when newspapers were reluctant to allocate column inches to protests against the Vietnam War or marches in support of abortion rights, Landy was busy documenting these demonstrations and proselytizing the hippie movement. He found a like-minded assemblage of idealists at rock concerts on New York City’s Lower East Side, sharing joints while Jim Morrison or Janis Joplin played on stage. For him there was a clear connection between the music and the activism. Everybody in the room, including the artists themselves, was part of a new culture with a lofty ambition to change the world. 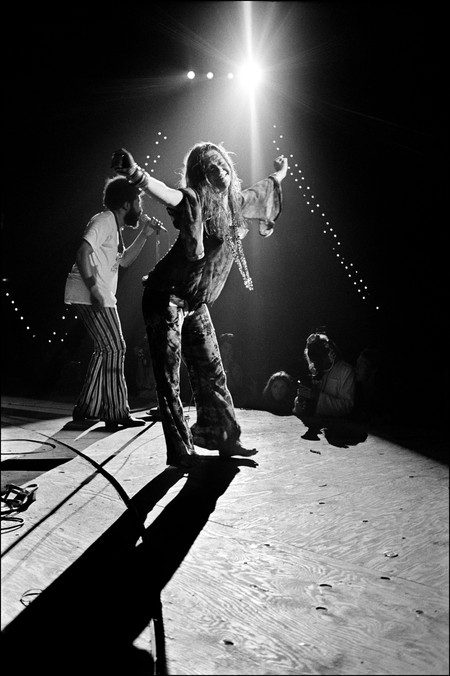 Three days of peace and music

When Woodstock was announced it was as if these rock’n’roll headliners – everybody from Jimi Hendrix to Sly and the Family Stone – were summoning the country’s activists to congregate for the ultimate love-in. The now-famous promotional poster designed by Arnold Skolnick declared “An Aquarian Exposition: 3 Days of Peace and Music.” Half a million people responded to the call, arriving in droves to crash the festival site – a farm in Bethel, in upstate New York. (The organizers weren’t able to find a venue close to Woodstock itself, but they decided to keep the name as an ode to the town’s artistic, hippie-centric spirit.)

“Peace and love was the prevailing mood for my generation at that time,” says Carl Porter, who attended Woodstock and still owns a family home close to the former festival site. “We were very tuned in to that wavelength and that vibe. The music reflected it, and having all those people on the same page was an extraordinary experience.” 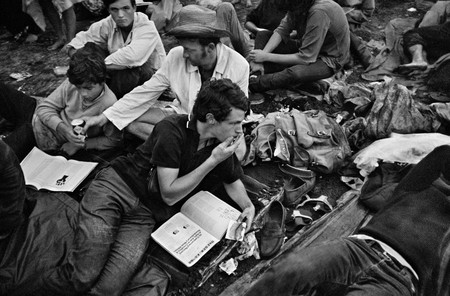 Despite descending into an organizational ordeal, Woodstock was “conceptual perfection” in Landy’s mind; it was a kind of utopia where the revelers were free from the normal constraints of society – including law enforcement – and created their own quixotic bubble.

“People went to enjoy music and be part of a movement and a culture that was trying to change the world and make it a better place,” he explains, “and in order to do that certain things had to be changed from the way normal life is lived.”

The festival attendees meditated en masse with the yoga guru Swami Satchidananda. Copious hallucinogenic substances were openly consumed. There was dancing in the downpours, unabashed nudity and reports of couples literally “making love, not war” in public. But while Woodstock is certainly famous for its hedonism, the prevailing reputation of the festival is one of exemplary kindness. Everywhere you looked people reportedly exhibited the very best of human nature in a way that can seem rare today. 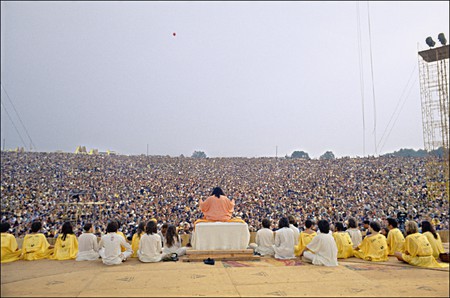 “I never heard one hostile conversation or an argument,” says Porter. “From the people at the festival, the landowners, the people giving food away – everyone was extraordinarily nice to each other.”

The 50th anniversary of Woodstock

This year marks the 50th anniversary of Woodstock, and Bethel is having a moment in the spotlight once again. It’s an unassuming destination surrounded by a series of lakes that are popular with fishing and boating enthusiasts. Quaint restaurants, recommended more for their views than their cuisine, line the water’s edge. Undoubtedly the town’s main attraction is the Bethel Woods Center for the Arts, a non-profit situated among the tranquil emerald hills of the former festival site. 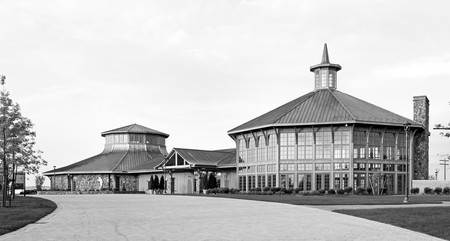 The center was founded in the ’90s after Alan Gerry, a philanthropist who was passionate about revitalizing the tourism industry in the Catskills, purchased the 37-acre (15-hectare) field in Bethel that hosted Woodstock in ’69. Embracing the land’s musical legacy, Gerry set out to build a world-class performing arts center, including an outdoor pavilion with gently sloping grass lawns, a domed indoor events space and a museum replete with original Woodstock artefacts and a groovy psychedelic aesthetic that really sets the scene.

On the anniversary weekend (August 16-18) a select group of original Woodstock headliners including Santana and John Fogerty will return to Bethel Woods for one-off concerts. They’ll be joined by rock legend Ringo Starr and others. Along with the returning performers, the venue’s ‘A Season of Song and Celebration’ (special programming named after a lyric from Joni Mitchell’s ‘Woodstock’) also includes a temporary exhibit at the museum called We Are Golden. The exhibit helps contextualize the era while also drawing parallels with the present day – a theme that runs through the summer’s Woodstock-inspired events series ‘Vibrations.’

Elliott Landy is among several photographers whose work features prominently in the exhibitions, helping bring the story of Woodstock to life for a new generation who might have more in common with the ’60s activists than they imagined. Fifty years later, America’s young people are highlighting similar social justice issues and positioning themselves at the forefront of change once again.

“What’s important about Woodstock is not whether we have another one, because I don’t think we can repeat it, but that we look inside the minds of the people who were there,” says Landy. “The message of the so-called hippie generation is that if we learn how to think ‘properly’ we can have a peaceful, loving society. To me, the message of Woodstock is to pay attention to the underlying essence of this event and go forward with those lessons.” 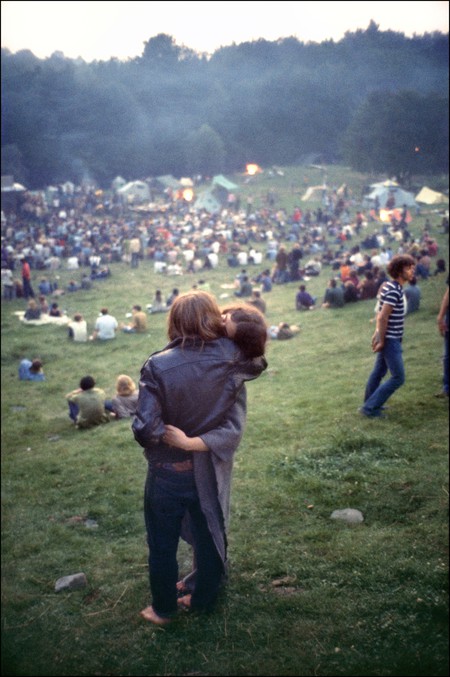 ‘We can have a peaceful, loving society’ | © Elliott Landy/Magnum Photos