Does good design have the power to heal?

Whether consciously or otherwise, our homes relay a message about who we are and what we’re about. They tell the story of our aesthetics, our lifestyle, our personal, interior lives. But what kind of subconscious story are you creating inside the home? And perhaps more importantly, how can we transform our space into something sacred, a place that tells a story that is distinctly our own?

Elana Kilkenny, an ‘intuitive’ designer, counselor, and founder of Sacred Space Design, has found an unusual niche in the New York design community. One that centers around healing, transformation, and psychic-based interior design. “I always like to think of your home as an evocation of your heart and soul,” she says. “Your home is always telegraphing stories back to you. With Sacred Space Design, it’s about intentional design and taking ownership of the stories you want your home to reflect back to you.”

For the past 17 years, Elana has worked with clients to transform their space and facilitate healing in the home. She describes it as “empowerment-centric, psychic work.” It’s a nuanced practice that focuses on storytelling, patterns, symbols, and the individual needs of the client. 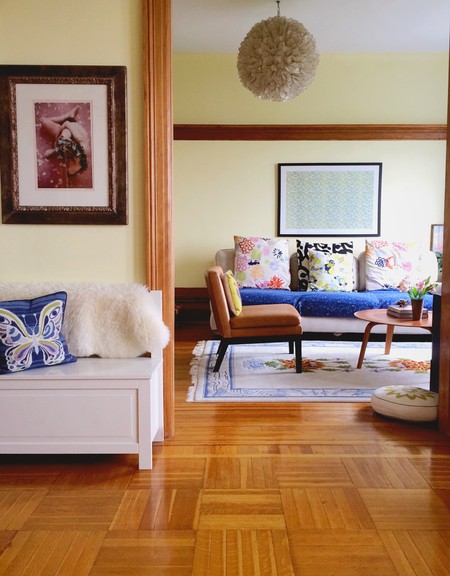 After obtaining degrees in Psychology and English at New York University, undergoing the BTB Feng Shui Masters Training Program, studying with reiki master Raven Keyes and private-healing trainer Marion Secor, and visiting various holistic workshops around the country, Elana realized her calling. She would use her talents and her psychic abilities to help others transform their homes and lives.

The process begins with a reading of the space: Elana goes into a client’s home, walks around and tries to “listen” to the story the space is telling her.

“For some people, we’ll do a space clearing and blessing,” she says. “But I always listen to the story of the space, where this person is, where they’re going… and we’ll do a ritual about what they’re wanting to heal and let go of.” And that’s just the first step.

Some things may need shifting—psychically and literally. A lot of the work Elana does is pretty much traditional interior design, but with a different mentality attached to it. She looks at not only the functionality and beauty of the design objects, but the symbols of the space and intentionality behind them.

One client, she recalled, lived in a space that could have easily been photographed for Elle Décor: “It was gorgeous, it was beautiful. Very minimalistic.” But something was off. The client needed a different kind of change, one that started with the home (“Change your space, change your life” is Elana’s motto).

Elana began listening to the space and what the story was telling her. After sitting down with the home owner, she uncovered stories of an abusive childhood, a dictatorial father, and a rather cold upbringing that trickled over to his existing relationships. He always felt like he had eyes looking over him, a residual feeling of judgement, as if he could never live up to the expectations of his ultra-successful father.

Interestingly, his design choices were actually mirroring that pattern of behavior—that part of his past.

“Unconsciously, [my client] had bought all this really beautiful, expensive artwork. Really oversized and mostly of individual people, not even duality. So there were all these other people’s voices or eyes on him, looking down on him.” They were placed in intimate areas within the home: over his bed, in his office. Although the artwork was interesting, nearly 90 per cent of the imagery was not joyful or supportive. “The expression [within the paintings] was very much a sense of judgement, or unhappiness, or mystery, or something foreboding. And architecture was kind of a co-conspirator in this,” Elana recalls.

Now, this is where it gets a bit nuanced. This is where Elana’s practical magic really came to light. The answer, she says, wasn’t to get rid of all the paintings and start with a clean, fresh palette. After all, some were investment pieces, and some the client was devotedly attached to.

It was about re-configuring these images, integrating them in a healthy way to fit a new narrative within the home. Reshaping their stories, so to speak. But first, Elana, drawing on her counseling background, decided she had to be clear about the pattern that he was propagating and how it was manifesting itself in the home. He had to consciously decide that he wanted to end it.

“His intellect would say ‘I don’t want this in my space,’ but there was a vulnerability because that’s what his family was like. That’s literally what love was to him.” Part of Elana’s work was to literally re-frame the art, change the positions, and even add other art around some of the paintings. “When we did that some of the pieces actually took on a very different story.”

Elana’s intuitive-based design revolves around addressing the psychic issues within the client or letting go of what doesn’t work in an individual’s life. It’s a healing process, mixed with a little bit of magic and a little psychology. For this man, giving up certain pieces of art were part of that process of surrender, part of him saying “I don’t want to be wounded, to carry into my relationships this view of myself as this wounded man,” Elana recalled. She even had him designate a ‘messy’ drawer and closet in order to combat his issues with perfectionism.

But not everyone has a problem with too-perfect homes. Some people need more order. Some need a bit more guidance in tackling their mess, their clutter, the overload of everyday life that piles up around the space. Again, this is where the personalized, intuitive aspect of Elana’s design work comes into play. 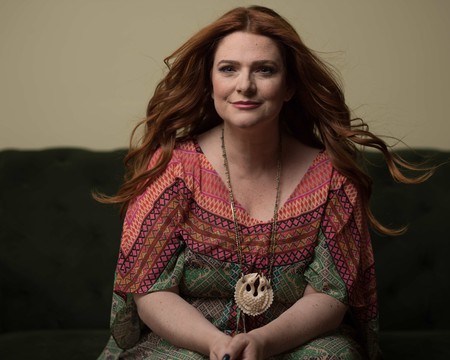 For people with too much clutter in the home, Elana says it normally stems from one or two things: “A lot of the time [people] hide behind the fact that they’re creative… A lot of it is fear: a fear or thinking that things have to be kind of a mess or their life has to be dramatic in order to create art,” she says. But other times, a clutter overload is the result of something deeper, an unconscious drive or memory that needs sorting out, perhaps stemming from childhood.

“Sometimes it has to do with not being able to let go or a lack of trust. A fear that [maybe more] isn’t coming. Or not letting go of certain objects because of the attachments to it—maybe they were [gifts] and there’s a sense of guilt about that. Or it’s a mentality from their parents, which they took on, depending on the age of their parents, like if they were in the Depression era,” says Elana. Or, perhaps even deeper, the clutter is a form of self-sabotage.

Depending on where all the clutter is located in the home, and what type of clutter it is, Elana says that it’s often meeting a mass in their lives somehow, with negative effects. “The person doesn’t trust when things are more peaceful, when things are clearer. And that sometimes goes back to their childhood, when something fell apart. Or the other shoe is dropping,” she says. “There’s usually a reason… and there’s also often a reason why they haven’t dealt with it.”

For some, however (and this is particularly true for all the Leslie Knopes out there), some people are so perfect in so many ways, with every aspect of their professional and social lives neatly organized and put together, that the interior space of their home just doesn’t matter. Their interior mayhem is actually a form of rebellion. “My life is so put together…why does my home have to be that way too?” Not everything can be perfect in this world.

Whether it’s healing the space itself through design or healing the mind, the process begins with facing internal issues and unconscious drives first. Some people just need someone else to prompt them to make these kinds of changes, to guide them through it. 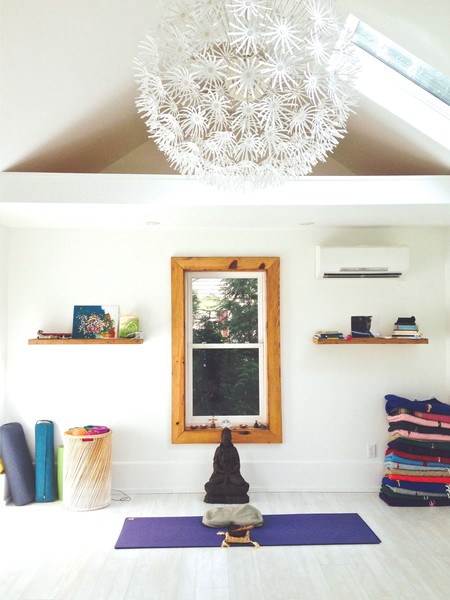 Some of the biggest transformations Elana has seen to date have been when people want to get in touch with “a boldness” within themselves, or when they’re going through a relationship change. They want a space that “hugs them” each day, that greets them in the morning and the evening. When clients begin to make these design changes, it creates a kind of “alchemical reaction,” Elana says. “It’s like a different kind of mirror,” where people can see new parts of themselves reflected back in the home.

Another one of Elana’s clients was a divorcee who recently found herself ready to love again. Part of the initial “reading” of the space included Elana asking the woman how she envisioned love. What did she want love to make her feel like? What did love mean to her? The woman chose a photograph of light pouring in from the window. “For her, she kept having this image of how she wanted to feel in the morning waking up to her beloved. So that was a personal symbol to her.”

At the end of the day, it’s about about visualizing your intentions. It’s about manifesting them. “If you do any process with deep intention, it will shift something,” she said. The real magic is to stay awake to the story of your home, to pay attention to what your soul and space are telling you, and to create a space that truly reflects you.

For more information about Elana’s design work, visit her website here. For more stories on holistic rituals in design, check out these seven ways to rejuvenate your home.