Olivia Laing's The Lonely City Changes How We See Loneliness 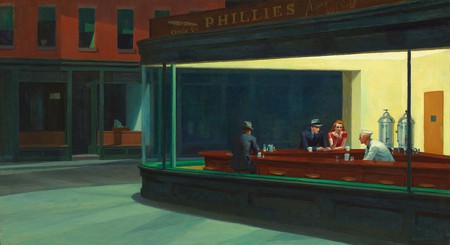 Nighthawks (1942) | © The Art Institute of Chicago/WikiCommons

Anyone who’s lived in a big city knows the particular loneliness that affects urban dwellers. In sharp contrast with countryside boredom, this very modern solitude is born out of certain limited, almost voyeuristic, contact with other people. Our own loneliness is put in opposition with the constant activity and noise of those around us. It is precisely this alienation that Olivia Laing reveals in her fantastic new book, The Lonely City: Adventures in the Art of Being Alone, interweaving her own personal experiences living in New York City with those of other artists: Edward Hopper, Andy Warhol, Klaus Nomi, David Wojnarowicz, Nan Golding, Henry Darger, and many more.

In continuation with her previous books, To The River and The Trip to Echo Spring, Laing’s latest work takes nonfiction into new territory, exploring loneliness – and its relationship with creativity – through her life and that of other NYC artists. If it makes for a gripping, albeit troubling, read, it is in part because she is able to illustrate her experiences with the art of others, guiding us through the various, singular circumstances that influenced the artworks’ making. Edward Hopper, the quintessential painter of urban loneliness, is the first to make his entrance in the book: 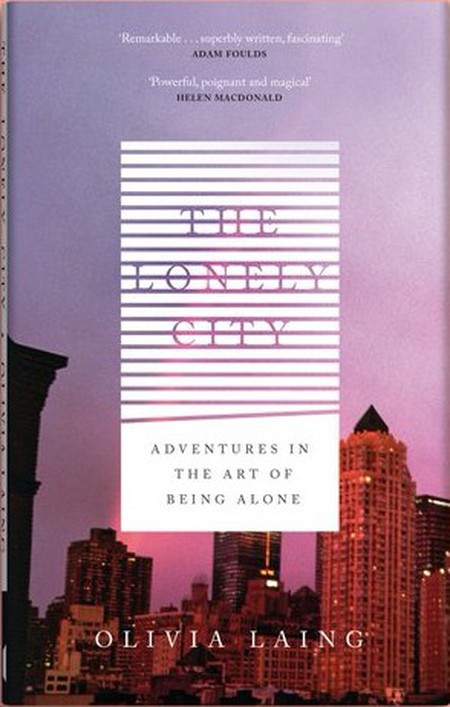 The Lonely City by Olivia Laing | Courtesy of Canongate Books

‘I knew what I looked like. I looked like a woman in a Hopper painting. The girl in Automat, maybe, in a cloche hat and green coat, gazing into a cup of coffee, the window behind her reflecting two rows of lights, swimming into blackness. Or the one in Morning Sun, who sits on her bed, hair twisted into a messy bun, gazing through her window at the city beyond. A pretty morning, light washing the walls, but nonetheless something desolate about her eyes and jaw, her slim wrists crossed over her legs. I often sat just like that, adrift in rumpled sheets, trying not to feel, trying simply to take consecutive breaths.

The one I found most disturbing was Hotel Window. Looking at it was like gazing into a fortune teller’s mirror, through which you glimpse the future, its spoiled contours, its deficit of promise. This woman is older, tense and unapproachable, sitting on a navy couch in an empty drawing room or lobby. She’s dressed to go out, in a smart ruby-coloured hat and cape, and is twisting to look down into the darkening street below, though there’s nothing out there save a gleaming portico and the stubborn black window of the building opposite.

Asked about the origins of this painting, Hopper once said in his evasive way: ‘It’s nothing accurate at all, just an improvisation of things I’ve seen. It’s no particular hotel lobby, but many times I’ve walked through the Thirties from Broadway to Fifth Avenue and there are a lot of cheesy hotels there. That probably suggested it. Lonely? Yes, I guess it’s lonelier than I planned it really.’

What is it about Hopper? Every once in a while an artist comes along who articulates an experience, not necessarily consciously or willingly, but with such prescience and intensity that the association becomes indelible. He never much liked the idea that his paintings could be pinned down, or that loneliness was his metier, his central theme. ‘The loneliness thing is overdone,’ he once told his friend Brian O’Doherty, in one of the very few long interviews to which he submitted. And again, in the documentary Hopper’s Silence, when O’Doherty asks: ‘Are your paintings reflective of the isolation of modern life?’ A pause, then Hopper says tersely: ‘It may be true. It may not be true.’ Later, asked what draws him to the dark scenes he favours, he replies opaquely: ‘I suppose it’s just me.’

Why, then, do we persist in ascribing loneliness to his work? The obvious answer is that his paintings tend to be populated by people alone, or in uneasy, uncommunicative groupings of twos and threes, fastened into poses that seem indicative of distress. But there’s something else too; something about the way he contrives his city streets. As the Whitney curator Carter Foster observes in Hopper’s Drawings, Hopper routinely reproduces in his paintings ‘certain kinds of spaces and spatial experiences common in New York that result from being physically close to others but separated from them by a variety of factors, including movement, structures, windows, walls and light or darkness’. This viewpoint is often described as voyeuristic, but what Hopper‘s urban scenes also replicate is one of the central experiences of being lonely: the way a feeling of separation, of being walled off or penned in, combines with a sense of near-unbearable exposure. 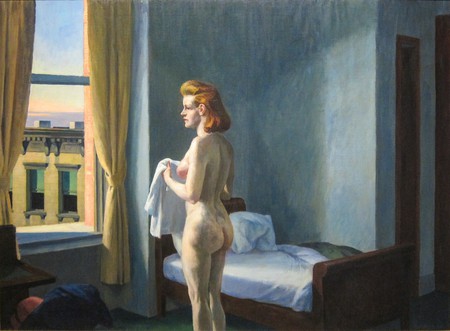 This tension is present in even the most benign of his New York paintings, the ones that testify to a more pleasurable, more equanimous kind of solitude. Morning in a City, say, in which a naked woman stands at a window, holding just a towel, relaxed and at ease with herself, her body composed of lovely flecks of lavender and rose and pale green. The mood is peaceful, and yet the faintest tremor of unease is discernible at the far left of the painting, where the open casement gives way to the buildings beyond, lit by the flannel-pink of a morning sky. In the tenement opposite there are three more windows, their green blinds half-drawn, their interiors rough squares of total black. If windows are to be thought analogous to eyes, as both etymology, wind-eye, and function suggests, then there exists around this blockage, this plug of paint, an uncertainty about being seen – looked over, maybe; but maybe also overlooked, as in ignored, unseen, unregarded, undesired.

In the sinister Night Windows, these worries bloom into acute disquiet. The painting centres on the upper portion of a building, with three apertures, three slits, giving into a lighted chamber. At the first window a curtain billows outward, and in the second a woman in a pinkish slip bends over a green carpet, her haunches taut. In the third, a lamp is glowing through a layer of fabric, though what it actually looks like is a wall of flames.

There’s something odd, too, about the vantage point. It’s clearly from above – we see the floor, not the ceiling – but the windows are on at least the second storey, making it seem as if whoever’s doing the looking is hanging suspended in the air. The more likely answer is that they’re stealing a glimpse from the window of the ‘El’, the elevated train, which Hopper liked to ride at night, armed with his pads, his fabricated chalk, gazing avidly through the glass for instances of brightness, moments that fix, unfinished, in the mind’s eye. Either way, the viewer – me, I mean, or you – has been co-opted into an estranging act. Privacy has been breached, but it doesn’t make the woman any less alone, exposed in her burning chamber.

This is the thing about cities, the way that even indoors you’re always at the mercy of a stranger’s gaze. Wherever I went – pacing back and forth between the bed and couch; roaming into the kitchen to regard the abandoned boxes of ice cream in the freezer – I could be seen by the people who lived in the Arlington, the vast Queen Anne co-op that dominated the view, its ten brick storeys lagged in scaffolding. At the same time, I could also play the watcher, Rear Window-style, peering in on dozens of people with whom I’d never exchange a word, all of them engrossed in the small intimacies of the day. Loading a dishwasher naked; tapping in on heels to cook the children’s supper.’
Extract taken from Olivia Laing’s The Lonely City: Adventures in the Art of Being Alone, courtesy of Canongate Books.