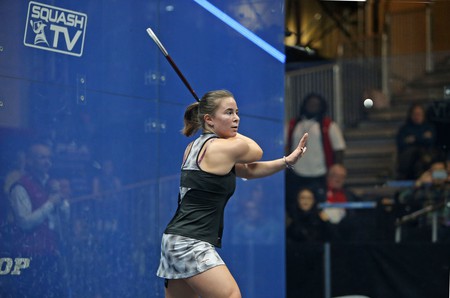 Olivia Blatchford would always beg her parents for the same birthday present growing up: tickets to the Squash Tournament of Champions at Grand Central Station in New York City.

Blatchford didn’t just want any tickets, though. She needed to be seated far enough away from the glass court set up in Vanderbilt Hall so she could analyze the tactics. She also wanted to be dead center for the optimal viewpoint.

“If I got really lucky, the person in front of me wouldn’t show up because I was still on the shorter side,” she said.

It would be a struggle to pry Blatchford from her seat under the iconic chandeliers, eyes fixated on the fast-paced action occurring inside the glass court. Matches would end around 11 p.m.—well past curfew for a five, six or seven year old.

Blatchford grew up in Manhattan down by Battery Park City. Her family moved to Brooklyn when her brother was born and relocated throughout the borough as her mother had an affinity for renovating houses.

Blatchford spent her early years being dragged around New York City as her parents, Peter and Elizabeth, were both active squash players. Eventually, Olivia grew tired of watching the endless weekend tournaments, finally putting her foot down and saying enough was enough.

Her father persuaded her to come just one more time. She reluctantly agreed. Yet, it was at this tournament—what was supposed to be her final foray into squash—where Blatchford had a change of heart. She took to the court and fell in love.

Squash has consumed her life since. Blatchford, 26, is currently ranked No. 13 in the Professional Squash Association (PSA) global standings.

“I don’t think my dad could have imagined where I’d be now with it,” she said at the 2018 Tournament of Champions (ToC) in New York City. “Instead of him carting me around to his events, it would be me carting him around to my events after that.”

Just as squash grew on Blatchford, the sport is growing on Americans.

According to U.S. Squash, the United States has the fastest-growing squash participation in the world. The Sports & Fitness Industry Association (SFIA) shows 66 per cent growth overall since 2010 to 1.71 million players. The SFIA ranks squash as the 12th fastest-growing sport in the U.S. over the past three years with a 32.6 per cent increase in participation.

More than 200 colleges and universities across the country have squash courts, while every Ivy League school offers a varsity squash program. Blatchford played collegiately at University of Nebraska.

While squash has traditionally been a sport for affluent communities, urban squash programs such as City Squash in New York City have made the sport more accessible to participants of all socioeconomic backgrounds.

“Squash is an elitist sport,” Blatchford said. “What they’re trying to do now with the urban squash programs is to really get kids in local communities, who don’t have the opportunity to be exposed to the sport, a chance to get into a prep school and go pursue squash in college and have opportunities for a greater and better future, which squash can provide and open doors to.”

World No.13 @LivBlatch is relishing playing at the @ToCSquash when the tournament gets under way later this week.

Squash isn’t only opening doors for players domestically, but for international participants as well. Born in Cairo, Egypt, Ali Farag started playing squash when he was six years old, following in the footsteps of older brother Wael.

Ali, like Blatchford, had to be dragged off the court by his parents because he loved playing so much—and he used squash as an opportunity to come to the United States to further his education. Farag earned a degree in mechanical engineering from Harvard University while starring for their team.

“Squash is becoming a passport to the U.S.,” said the No. 3-ranked Farag, who reached the 2018 ToC semifinals. “I went to Harvard and that’s only because of squash. I was obviously doing well academically, but squash gave me a huge boost to get accepted.”

Squash has also helped Blatchford and Farag find love. Blatchford is currently engaged to Scottish No. 1 Alan Clyne, while Farag’s wife, Nour El Tayeb, is ranked No. 7 in the women’s world standings. 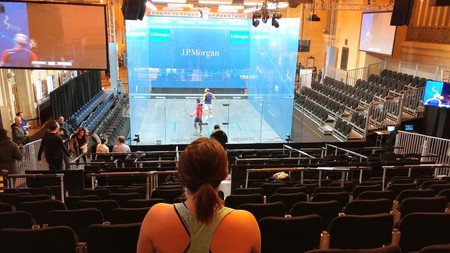 Sitting in the same seats she used to request year in, year out for her birthday, Blatchford passionately and excitedly speaks of the game, nay sport, that has shaped so much of her life.

She recalls the 2017 ToC, when she earned a place inside the hallowed glass court in the iconic Grand Central Station for the first time. A smile stretches across her face as she reflects on another integral change of perspective in her life. Playing in Grand Central had always been a dream, but it is now a reality for the New Yorker.

“There’s an electricity in the air, there’s a vibrancy, and there’s so much going on around you—it’s so New York,” Blatchford said. “It’s so iconic, and there’s a life and beauty to it and it’s so mesmerizing. This tournament means everything.

“I go and play in amazing places—Shanghai, Saudi Arabia, in front of the pyramids in Egypt, on top of a mountain in Colombia—but New York is the best.”