NYC's Most Eccentric Gym Knows the Secret to Health and Hotness 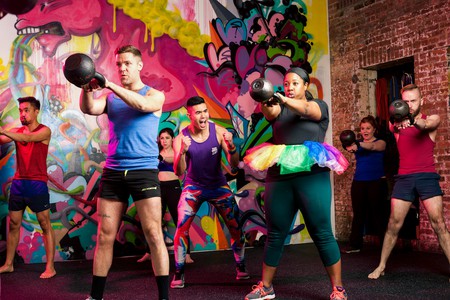 If your feelings about exercise have been shaped by intimidating gyms with stand-offish clientele, Mark Fisher Fitness – the most exuberant and inclusive fitness studio in New York City – may be the place for you.

Mark Fisher Fitness (MFF) is a cornucopia of rainbows and positive vibes. Its original studio, which stands out like a sparkly thumb in humdrum Midtown West, is decorated with inflatables and unicorn murals. The trainers have a preference for bonkers costumes, and a framed cross-stitch in the bathroom proclaims “fear is the cockblocker of dreams”.

It’s a sensibility that doesn’t immediately match up with the countless five-star Yelp reviews calling MFF ‘life-changing’ – but don’t let the silliness fool you. Mark Fisher is serious about helping its members (or ‘ninjas’, as they’re known) get in shape while feeling welcome. It’s kind of like the Burning Man of gyms. 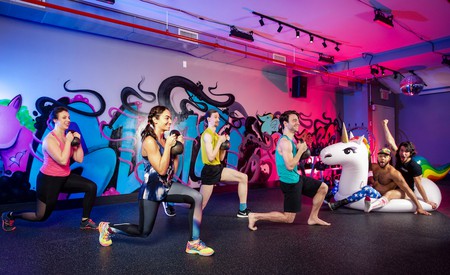 “I’m inspired by aggressive, generous, truly radical inclusion,” explains eponymous CEO Mark Fisher. “So if we did have some super jacked, straight, sports bro come on in, as long as he’s cool to everybody he’s welcome. We are just so committed to making a space that’s friendly and kind and welcoming in a way that respects how the person wants to engage.”

Fisher used to perform on stage, and possesses the magnetism that most actors do. It wasn’t until his childhood friend Michael Keeler nudged him towards his other passion, personal training, that he decided to switch gears. The two of them opened MFF in 2012, and have since become one of the NYC fitness scene’s biggest success stories, with two very profitable gym locations and a consultancy called Business For Unicorns.

The secret sauce is partly found in the gym’s signature training program, which sees new clients commit to a schedule of three workouts per week, for a period of six weeks. It’s a process with all the highs and lows of a classic Joseph Campbell hero’s journey, and invariably gets results.

More crucially, the program encourages camaraderie. When you’re sweating through another round of burpees in your third session that week, a high five from your neighbor means a lot. While other studios talk about community without much to show for it, MFF has genuinely managed to expedite friendships.

“Ninjas are directly midwife-d out of the unicorn vagina into this happy little [place], where they’re with other people in this very intensive, immersive, educational program,” Fisher says. “People tend to get very close and over the years the web gets deeper and deeper. There are all these different dyads and arrangements of sub communities going on. I think that has been hugely important for us.”

The vehicle may seem ridiculous, but the message it carries is quite profound. On my visit, a woman interrupted my studio tour, compelled to tell me that she had joined MFF six years ago and that it was “the best decision [she] ever made”. Members genuinely become invested – in the studio, in the community, and, most importantly, in their own health.