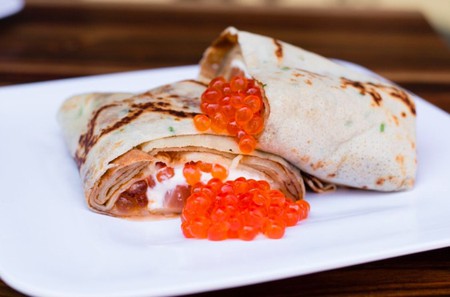 Did you know that one of Russia’s favorite fast-food chains has two branches in NYC?

Russia’s been in the news a lot lately, often for unflattering reasons. But no matter how questionable its political actions may be, its culinary traditions remain unbesmirched.

Back in Russia, Teremok is one of the most widespread and popular fast-casual chains (we’re tempted to compare it to Shake Shack here in New York, but with borscht and blinis subbing in for burgers and fries), with more than 300 locations throughout the country. But did you know it has two locations in Manhattan? They’re the chain’s first international branches, with more planned around the world.

The company came to be in 1998, when, following Russia’s financial crisis, former mathematics student Mikhail Goncharov (whose housewares business perished in the crash) saw American fast-food chains proliferating and was inspired to create something similar… but with blini rather than burgers. He brought on his musician mother, whom he says has always been a terrific cook, as his cofounder, and to this day she still develops all of the company’s recipes as variations on her home cooking, Goncharov says.

What began as a single street kiosk eventually expanded to a few hundred storefronts, offering what Goncharov refers to as “contemporary Russian cuisine.” Teremok is best known for its blini (crepe-like pancakes, with savory or sweet fillings like sour cream and caviar), and also offers pelmeni (small meat-stuffed dumplings), buckwheat kasha, and an array of soups—all primarily takes on Russian comfort foods.

What would you like to eat from our menu right now? http://www.teremok.com/ #teremoknyc #foodieslove #foodgasm #nomnom #eeeeeats #foodcoma

And how did Teremok expand to New York? Basically by popular demand, Goncharov says. Six years ago, the company landed on CNN Travel’s “Foreign Fast-Food Chains Worth a Taste” list, (“It was a surprise”) and two years later it was included in USA Today’s “Top Foreign Chains We Want in the USA.”

Goncharov tells me it was “just a sign” that it was time to expand abroad. “We know the American market is there.” It didn’t hurt that the fast-food chains he’d seen swarming Russia were mostly US-based. NYC would be the best place to start, he figured, since he liked the style of life. And as you can find nearly any cuisine in the city, from Chinese to Cuban, he knew its diners were open to foreign flavors.

So, last year, the company opened first in Herald Square, then a Union Square location followed shortly after. Goncharov assures us that the dishes here are cooked identically to how they are in Russia, and the recipes haven’t changed during the trip across the Atlantic. Which means that, yes, it’s some of the most authentic Russian food you can possibly get outside of the former USSR, and it’s making Russian ex-pats here deliriously happy.

American tastes proved slightly unpredictable: a tomato-and-shrimp soup wasn’t as big a seller as expected, but buckwheat kasha has proved even more popular in NYC than in Russia. The “Goldie Lox” blini, with salmon lox, swiss cheese, and sour cream, is the best-seller; in Russia the original ham-and-cheese takes that title. Goncharov’s personal favorite, he says, is the Red Stars blini, with salmon roe, as well as Tatiana’s Caesar—named for his mother—with the bold change of tomato sauce subbing for traditional caesar salad dressing.

When, at the end of our conversation, I asked Goncharov whether there was anything else I should know about his business, he took out his phone to show me an image of a Teremok, the type of traditional Russian house for which his company is named. “In the 10th century,’ he said, “it was a real house, but later it became a fairy tale, a house in a fairy tale.” He couldn’t have known when he chose his company name that it would soon prove an apt metaphor for the rags-to-riches story of a man who used to wash windows as a university student, whose business would later be frequently referred to as the McDonald’s of Russia.