NYC Is Finally Getting The Train Hall It Deserves 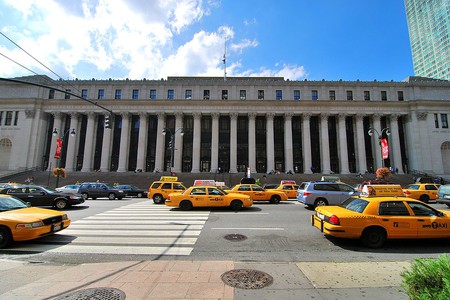 Anyone who has ever come through Pennsylvania Station in Manhattan knows that it’s not the most pleasant place. Typically, you go through it as quickly as possible – it’s crowded, ugly, dirty, and generally speaking, not a place where you want to hang out all day. But in a city as important as New York, with millions of people and hundreds of thousands of commuters rushing through each day, you’d think there would be a better alternative. And now, thanks to New York’s Governor Andy Cuomo’s plan to open Moynihan Train Hall, there will be.

Just across the street from Pennsylvania Station is the James A Farley Post Office building. It was built in 1912 and serves as NYC’s main post office, and Governor Cuomo has big plans to renovate it into a new, marvelous space called Moynihan Train Hall, which NYC needs and deserves.

Penn Station is notoriously un-New York. Today we're proud to announce that we're going to take care of that: by 2020, we're going to build the NEW Penn-Farley station and completely overhaul the transportation system. It's going to streamline travel throughout the region for the 230,000 @MTALIRR daily passengers and millions of subway riders. This is #Progress. 👏🏼

In the past, there’s been talk about renovating the building, but up until recently, no official plans had been made. Now there’s a $1.6 billion plan in collaboration with developers Related Companies and Vornado Realty and Skanska AB, with approvals and funding all set. If this new train hall comes to be, it will be the new home of Amtrak and the Long Island Rail Road. It will also have a giant, acre-sized skylight, making the space light and airy – the opposite of the dark and dingy Penn Station. And, of course, like all mega buildings in NYC, there will be ample space (112,000 square feet, to be exact) for high-end retail stores. There will also be new, high-end security measures.

In this week's #StateofNY, responding to the #Hoboken train accident, announcing 100 new jobs for Central NY, and unveiling the new Penn-Farley Complex.

The plan is for the new train hall to be completed by the end of 2020, and if it is, relief will finally come to the 600,000 travelers that pass through Penn Station each day. The MTA subway stations that currently run through Pennsylvania Station will also be redesigned, and overall efficiency, comfort, and aesthetics will be prioritized.

The need to transform Penn Station has existed for decades, and now, after 20 years of stalled proposals, the new and improved NYC train hall that the city desperately needs seems to be happening.