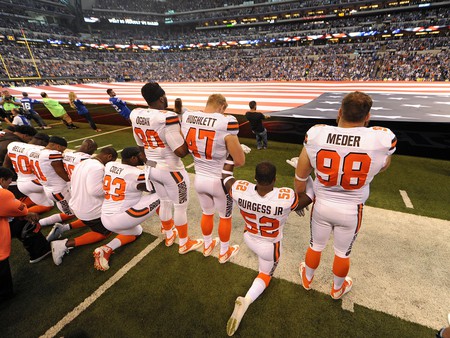 National Football League (NFL) Commissioner Roger Goodell confirmed “there has been no policy change” regarding players’ actions during the playing of the national anthem. That doesn’t mean a change won’t come about next week at the annual NFL team owners meeting in New York City.

The NFL Players Association will be present at the meetings from October 17–18, in an effort to continue the year-long dialogue surrounding players protesting during “The Star-Spangled Banner”. It began in the 2016 season when former San Francisco 49ers quarterback Colin Kaepernick sat then kneeled during the anthem to raise awareness for social injustices around the country. Since then, player protests have increased, whether kneeling, sitting, locking arms, remaining in the locker room or raising a closed fist during the anthem.

“What we’ve had is unprecedented dialogue over the past year with our players, with our owners, with community leaders, with law enforcement,” Goodell said. “What we plan to do is have a very in-depth discussion with our players and owners next week and make sure we truly understand the issues and understand the approach we want to take together with the players to address these issues in our communities.”

Full interview with Commissioner Roger Goodell and @Nate13Burleson regarding the National Anthem. pic.twitter.com/0Vx8YxfLT3

President Donald Trump has actively been involved in the controversy in recent weeks, demanding via Twitter that the NFL force players to stand for the national anthem.

Vice President Mike Pence even walked out of the Indianapolis Colts and 49ers game on October 8 at the behest of Trump, because players visibly protested the anthem. The move appeared to be orchestrated by Trump and Pence beforehand to prove their point.

I asked @VP Pence to leave stadium if any players kneeled, disrespecting our country. I am proud of him and @SecondLady Karen.

Regardless of the president’s involvement, NFL owners and the NFLPA continue their dialogue regarding the issues and rights of players. What has been lost in the last year, according to Goodell, has been the message and reason for the protests.

“What we really want to try to do is get back to focusing in on the actions we want to take to really improve our communities and support our players to get those things done and get beyond the current situation into where we’re really making a difference in the community,” he said.

When asked if Trump’s involvement in the situation caused extra urgency, Goodell said the urgency is getting back into the community and making a positive impact, stating “this isn’t something that started two weeks ago.”

While the NFL and NFLPA debate the issues, current and former NFL players have continued to utilize their platform and status to improve their communities and improve on relationships with law enforcement.

Miami Dolphins players Kenny Stills, Julius Thomas and Michael Thomas – all of whom have protested during the anthem this season – visited a pair of local schools and the North Miami Police Department earlier this week. Goodell accompanied the players for their visits.

THREAD: I want to thank N. Miami PD, & all police departments, who put their lives on the line everyday to protect our communities. (1/5) pic.twitter.com/KdCubhiaZm

“What took me aback was hearing from the police officers that from our protests, they’ve been getting a lot of negative reaction,” Stills said. “People see them and are, ‘Hands up, don’t shoot.’ It’s starting make the police feel like every one of them is a bad guy. We understand: every cop isn’t a bad cop. They’re doing their best.

“We were telling the young kids, if you see a police officer, ask for help. Thank them for their service. Try and build a relationship. And hopefully we can avoid all the issues we’ve been having.”