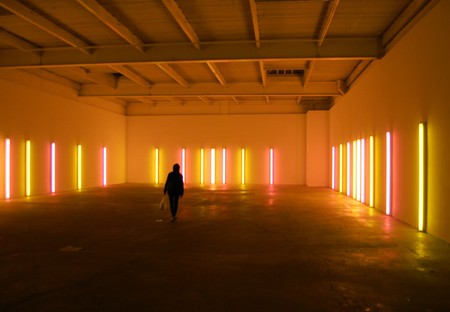 David Zwirner has come a long way since opening his first space in 1993 with a solo show of Franz West’s work, in which nothing sold. Twenty-five years later, the gallery giant celebrates his astounding success with a brand new $50 million Renzo Piano-designed exhibition space in New York City.

It’s been a quarter of century since David Zwirner emerged on the scene with a modest space on Greene Street, so it’s a month of celebrations for the triumphant art-dealing mogul. Not only is he staring down the barrel at opening his first Asian outpost on January 27—a 10,000-square-foot space in Hong Kong—but on January 8, the New York Times publicized Zwirner’s plans for a shiny new Chelsea location in 2020.

This New Year’s Day we’re reflecting on “The Year in Pictures 2017,” published by @nytimes. We’re honored that Yayoi Kusama’s “Festival of Life,” which opened in November at David Zwirner’s 19th Street gallery, is included in the roundup! · Pictured: A gallery visitor peeking into “Longing for Eternity,” an installation with flashing lights and a kaleidoscopic effect by the artist Yayoi Kusama. Photograph by Vincent Tullo for The New York Times. #happynewyear #FestivalofLife #YayoiKusama

For his forthcoming five-story headquarters on the corner of West 21st Street, Zwirner has commissioned the internationally-renowned, Pritzker Prize-winning architect Renzo Piano. The new gallery will provide an expansive, 50,000 square-feet of exhibition space across three stories, with two floors dedicated to office spaces and storage units, artnet News reported. According to Art News, Zwirner’s new flagship “will be the first commercial gallery designed by Renzo Piano, the Italian architect who helmed the new Whitney Museum a few blocks down the High Line.”

What’s yet another gallery space in Chelsea? Well, this one is an essential move in the context of Zwirner’s notable recent expansion—somewhat influenced, if not determined, by that of his peers: Gagosian and Hauser & Wirth.

David Zwirner is undoubtedly one of the world’s top art dealers, but until this recent push for expansion, he had significantly fewer spaces than his competition. In his interview with the Times, he addressed striving to strike that delicate balance between, as Art News concisely put it, “battling for global reach and maintaining personal relationships with his artists, and his search for a happy medium.”

“Artists want you to stay small; they hate when stuff changes,” Zwirner told the Times, noting the precariousness of supporting his artists whilst simultaneously keeping his head well above water in a demanding and increasingly competitive market. “On the other hand,” he said, “if you don’t move, some artists will feel you’re not doing enough for their careers. They want to have intimacy, but they also want to have the reach.”

For Zwirner, this new space is a necessary move forward to keep up with the high-speed expansion the industry’s top tier now demands. “It will upgrade the quality of my spaces,” Zwirner said, “and that is something attractive for all these people that I need in my life—the artists and the people who work here.”

According to artnet News, Zwirner may close his 19th Street gallery in 2020 once his new space is officially open, though his 20th Street space, designed by Selldorf Architects, will stay open. David Zwirner’s new Renzo Piano-designed headquarters will serve as the gallery’s fourth local space and the seventh worldwide, with more, surely, to come.