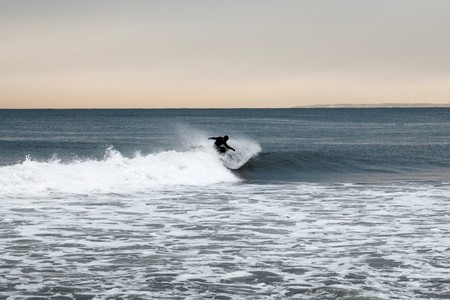 New York City and surfing don’t necessarily go hand in hand, but there are some pretty good waves within a short distance from the Big Apple. In fact, New York has recently been named as one of The 10 Best Surf Cities in the World by Surfer Magazine.

New York’s surrounding surf scene is as diverse as its 8.5 million inhabitants with breaks at Rockaway Beach, Lido Beach, Montauk, and various other nearby locations.

If being in the center of the world and occasionally finding yourself in the belly of a cold, heaving tube appeals to you, New York City is undoubtedly a smart bet. — Surfer Magazine

“It’s certainly grown a lot in the past 5-10 years,” said Mike Reinhardt, co-owner of Locals Surf School in Rockaway. “It’s not such an out-of-the-ordinary thing to be a surfer in California, and because of that I don’t think people connect with that as strongly, while here if you’re a surfer it means something a bit more.

While water temperatures and waves are more consistent in California, Hawaii, Bali, and other warm-weather locales, New York and East Coast surfers must brave the cold weather for the best breaks. Reinhardt, a Rockaway native and lifelong surfer, said there are two seasons that provide the best swells: hurricane season and winter.

Hurricane season, which lasts from late summer through fall, can be hit or miss depending on the conditions, while the winter storms, including the Nor’easters brought through the region, and low-pressure systems can produce the best rides, as long as you’re properly equipped and experienced for the bone-chilling water and air temperatures.

“I think people bond over that unique identity of being a New York surfer and they’re just a bit more driven,” Reinhardt said. “When you don’t know when your next waves are going to come, you’re like a crazed dog not knowing when your next meal is gonna come. When the waves come, you drop everything to go get them.”