10 New York Music Blogs You Should Be Reading Daily

A longtime cultural hub, New York has boasted a lively, trendsetting music scene for over a century. From the beginnings of Broadway to Studio 54’s disco era, the 1970s punk scene to legendary East Coast hip hop, New York has always danced to the beat of its own drum. Here are 10 of our favorite music blogs from the city that knows it best. 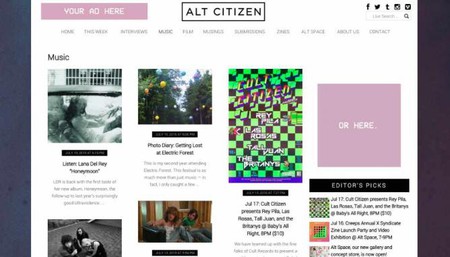 Brooklyn-based culture blog ALT CITIZEN wants its readers to have fun with music. With its weekly musical horoscopes and humorously-titled mixtapes — Songs to Piss your Parents Off, Love Is Weird And Confusing — the site adopts a playful approach to the subject. Sharing the latest tracks and videos from your favorite artists, as well as in-depth album reviews, the blog serves as a respectable go-to source for indie music news. Its accessible writing and consistent advertisement and support of the local music scene make ALT CITIZEN a must-read for any music-loving New Yorker. 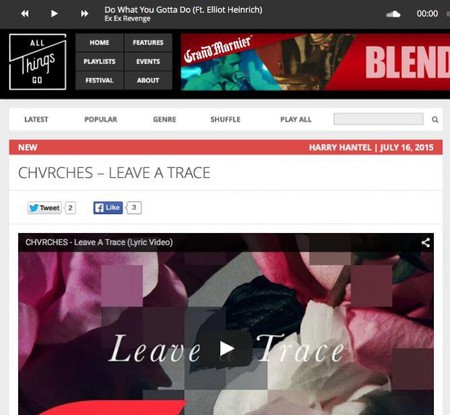 Image Courtesy of All Things Go

Its countless music uploads covering a range of genres make All Things Go a great place to explore the varied offerings of the indie music scene. Scroll through the site’s endless recommendations, or take advantage of the comprehensive genre directory to find your preferred sound right away. Taking its readers’ “adult education” upon itself, the blog also profiles artists from decades past in addition to interviewing contemporary indie acts. Introducing you to ageless tunes and the passionate artists behind the sound, class is in session at All Things Go.

Merging music and literature, largehearted boy offers a refreshing take on the traditional music blog. In what the site refers to as “cross-media cultural exchange,” features include book-inspired playlists crafted by the authors themselves, as well as book recommendations from known musicians. The blog’s inclusive approach to music is echoed by its weekly round-up of genre-spanning new releases and its eclectic daily mp3 uploads. In true New York spirit, the site celebrates art in all its forms and invites you to experience music in a different way.

The Wild Honey Pie returns music to its roots, approaching it with passion, untempered enthusiasm, and an appreciation indicative of the artistic spirits behind the site. The collective of art makers and lovers at this Brooklyn-based publication offer reviews of local shows and recent albums crackling with frank personality. Sharing their favorite indie tracks and personal footage of intimate live recordings, the bloggers restore music to its rightful place: as part of, and belonging to, a community.

For music news, check out The FADER’s dedicated coverage of both the mainstream and indie music scenes. The site’s meticulous updates allow you to keep up with your favorite artists, sharing headlines, new releases, and candid interviews. With all this information at your fingertips, you’ll be grateful for the toe-tapping playlists crafted by the blog to soundtrack your reading. 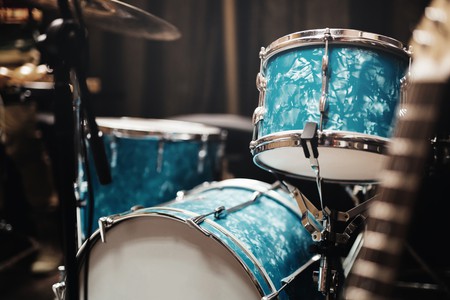 Specializing in “good music made by good people,” the folks at Pigeons & Planes don’t discriminate when it comes to genre. From Kendrick Lamar to Purity Ring, Shamir to Mac DeMarco, the blog champions openminded musical appreciation and invites its readers to discover new sounds. Delivering music news, interviews, and the latest tracks and videos, this inclusive site applies New York’s adventurous attitude toward music.

Et Musique Pour Tous is French for “And Music For All,” a promise on which the blog certainly delivers. Dealing in the hitherto-untapped genre of “space age bachelor pad music,” the site’s song recommendations range from cool electronica to lush pop with plenty of dance beats in-between. Veering away from the standard music blog format, each track shared by the blog is painstakingly selected and accompanied by a personal, related anecdote. Scrolling through the site is like peering into a stranger’s diary, but the effect is surprisingly warm. Capturing a range of emotions and experiences, the site succeeds in providing music for all.

Stereogum takes you beyond the music, showcasing artist interviews, alternative creative projects, and op-ed essays on the music industry and its star players. Catering to mainstream, oldies, and indie fans alike, the site also posts tracks and videos from an array of genres. For diligent music blog readers looking for a change of pace, this one-stop entertainment site is a worthy destination.

Active since 2005, the NYC blog for The Deli Magazine champions new and emerging bands and solo artists. The print edition of the magazine debuted in 2004 and can be viewed online. Based in Brooklyn, this independently owned publication drives the musical conversation in a way that cuts through the rather noisy social sphere.

We All Want Someone To Shout For

Blogging at its best (or at least its most traditional), We All Want Someone To Shout For is a one-man production. Sharing his favorite new songs and personal concert reviews from artists like Sufjan Stevens and The Wombats, blogger Will Oliver offers insight and opinion from one music fan to another.