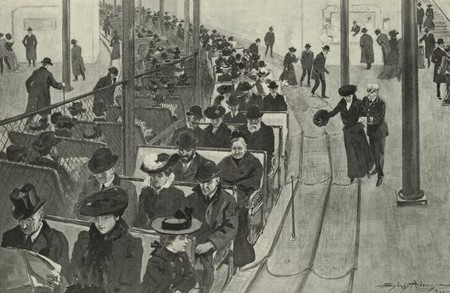 Moving sidewalks were first proposed in New York in the 19th century, and although they never became a reality, the concept posed questions about automated transport that were way ahead of their time.

In 1871, local wine merchant and inventor Alfred Speer developed an idea that would revolutionize the way people navigated New York City. He proposed an “endless-travelling sidewalk” that would be elevated above Broadway. The system involved three moving wooden belts, each moving faster than the last, and even included cars where people could sit and smoke as they were transported around the city.

Due to lack of funding, Speer’s sidewalk never got made, but the idea didn’t die there. The world’s first-ever moving walkway debuted at the World’s Columbian Exposition of 1893 in Chicago, and a similar system would receive acclaim at the Exposition Universelle in 1900.

The Paris walkway, dubbed the trottoir roulant, ran in a circle around the fair and nearly seven million visitors were reported to have used it. One woman even gave birth while in transit on the walkway, prompting her to christen the child Trottoir Roulant Benost. 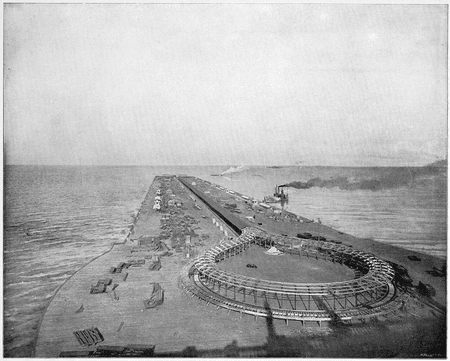 New York returned to the idea of a moving sidewalk in 1902, but this time it was under much more serious consideration. According to New Scientist, New Yorkers were fed up of the “daily torture” of the rush-hour congestion on the Brooklyn Bridge. The answer, according to the city’s Bridge Commissioner Gustav Lindenthal, was to build a high-speed moving sidewalk across the bridge.

This new plan involved a looping system with four walkways, the fastest of which would contain benches so people could be comfortable as they were shuttled across the river. The plan was debated in the city’s newspapers up to a year later. In the May 8, 1903 edition of The New York Times, it was reported that the scheme would be too expensive to implement, and users would need to be charged five-cent fares to make it feasible, an unheard of amount for a commute at the time.

Although in October the Times claimed the rapid transit commission moved for “immediate adoption” of moving sidewalks, the plans were never carried out, possibly due to the Brooklyn Rapid Transit Commission, which had a monopoly on public transport at the time.

There were other attempts to bring moving walkways to New York over the years, including one proposal in 1910 to replace the subway system with an underground version of the Brooklyn Bridge plan. There was also a plan to introduce it to the Williamsburg Bridge, Wall Street, and an elevated version of the subway.

Ultimately, the sidewalks of New York never moved, and the technology today is now most often seen in airports. But the trend survived. Today’s automation in personal transport can be tracked all the way back to Speer’s idea for Manhattan’s sidewalks, and the goal is the same: to minimize traffic and organize the mass of people moving in all different directions. For New Yorkers today who see the same problems as Speer did in 1871, it’s been a long time coming.