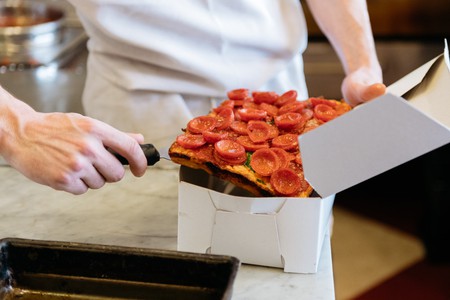 Nothing delights and divides New Yorkers like a debate over pizza. Simple conversations about the New York slice can swiftly spiral into heated arguments. Fresh versus shredded mozzarella is disputed as if a televised political debate. Dollar slices are shunned, and allegiances to neighborhood slice joints never waver, but what remains steadfast is New Yorkers’ enduring loyalty to New York’s pizza-making method.

Despite this unshakeable fidelity, a new kind of pizza has infiltrated New York over the past few years: Detroit-style pizza. It’s characterized by a crisp, cheesy crust, formed from baking in a rimmed, deep pan. Hot tomato sauce is plopped on top in two parallel lines at the very end, hiding a bubbling nest of cheese and toppings. In a city flush with Neapolitan pies, dollar slices, and Sicilian squares, Detroit-style pizza—as the new kid in town—began to stand out. 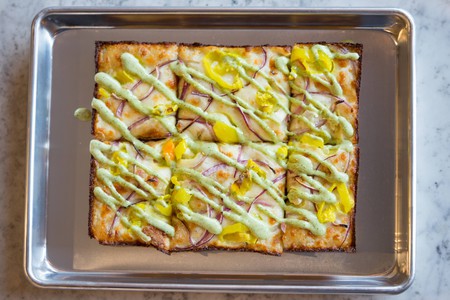 Hyland and his wife Emily opened Emmy Squared in 2016 in Williamsburg, Brooklyn, following the popularity of their first pizza restaurant, Emily. While Emily specializes in thin, wood-fired pizzas, Emmy Squared is a haven for the squat, rectangle variety. Here, pies like the Emmy (dough lined with mozzarella, banana peppers, red onion, and ranch) and the Angel Pie (mozzarella, ricotta, mushrooms, and truffle-mushroom cream) are rotating in and out of the oven tucked in silver tins, not too far from Joe’s Pizza and Domino’s down the street. In a matter of days after opening, Emmy Squared became a roaring success. On any given night, masses of people flock to Grand Street, spilling out onto the corner as they patiently wait for a bite of the foreign, avant-garde pies.

Before Emmy Squared, NYC’s dining scene hadn’t seen anything resembling this Midwestern transplant. Nowadays, several Detroit-style pizza shops and restaurants in New York City have popped up. Everyone wanted to get a bite of the action, including newcomers Lions & Tigers & Squares, Massoni, and Williamsburg Pizza.

Detroit-style pizza may only be a couple of years old on the East Coast, but restaurants have been slinging these pies in Detroit since 1946. This is partly thanks to Buddy’s Pizza—the first restaurant said to serve these pies—and partly because of the automotive culture of Detroit at the time. The legend goes that autoworkers were bringing home 8×10-inch blue steel pans, mostly as a container to keep nuts and bolts. But soon wives were emptying the pans and employing them as a tool to make dough, bread, and pizza. 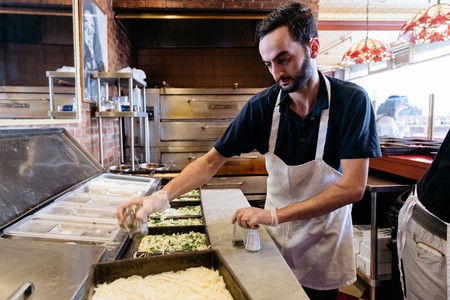 “The thing about the blue steel metal, it’s very conducive to heat,” Francis Garcia, founder of Artichoke Pizza and Lions & Tigers & Squares, says. “It’s kind of like a pastry pan. It’s thin so the heat hits it right away. You put them on the stone and boom: The heat goes right through them.”

When it’s made in Detroit, the pizza starts off with a dense dough and a sprinkling of toppings, followed by a showering of shredded brick cheese (a processed Wisconsin cheese). It’s loaded into the oven as a white pie, and once it comes out, stripes of hot red sauce are poured on top, like the rivulets of a waterfall.

“There’s a joke that the two stripes of sauce on top are supposed to be like racing stripes on a car,” Hyland says. 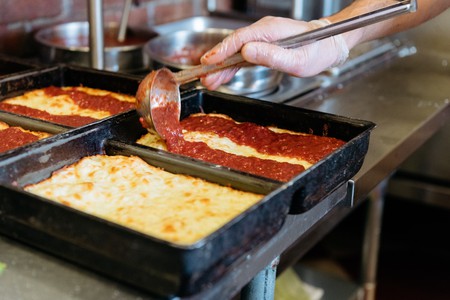 By cooking the pizzas in these blue steel metal pans, the outer crust blackens. Peeling the crust away from the pan, you’re left with small, blistered, cheesy morsels. “The cheese melts in between the dough and the pan, and it has this crostini-like effect,” Garcia says. “It burns the cheese.” Hyland likens it to a mozzarella stick: “The cheese cooking along the edge becomes crispy and caramelized. It’s like when a mozzarella stick explodes. That’s like the edge of the pizza: a burnt mozzarella stick.”

Detroit-style pizza is defined by that crisp crust, those leftover bits of charred cheese, and its pudgy size. New York-style pizza, on the other hand, feels foreign in comparison. It’s flat for one, with a doughy crust, slick with grease, and eaten without silverware. Plus, the layering process is entirely different; any slice shop will tell you slices should all be built with the dough first, then sauce, cheese, and toppings. Despite the differences between the two styles, both Hyland and Garcia confess they were influenced by New York-style pizza for each of their iterations. 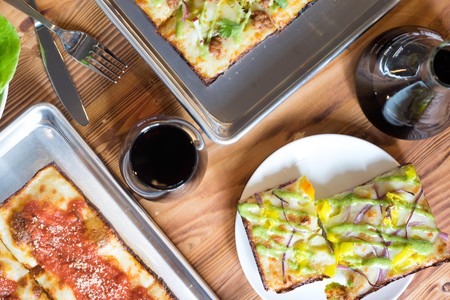 “We didn’t want to do a replica of Detroit-style because we’re in New York—not Detroit,” Hyland says. “It always pisses me off when I get to a city and it says ‘authentic New York pizza.’ Yeah, OK, dude. I’m not going to do authentic Detroit-style pizza.”

Instead, Hyland and his team put their own New York-inspired riff on the pies. At Emmy Squared, the sauce is much lighter—similar to what you’d find on a New York pie—and the cheese employed is mozzarella, not Wisconsin brick. The dough is fluffier and airy, like focaccia. Plus, the layering process is closer to New York-style: dough, cheese, sauce, with toppings covering the sauce.

“Our pizza has the flavor profile of New York pizza, but looks like a Detroit-style pizza,” Hyland says. 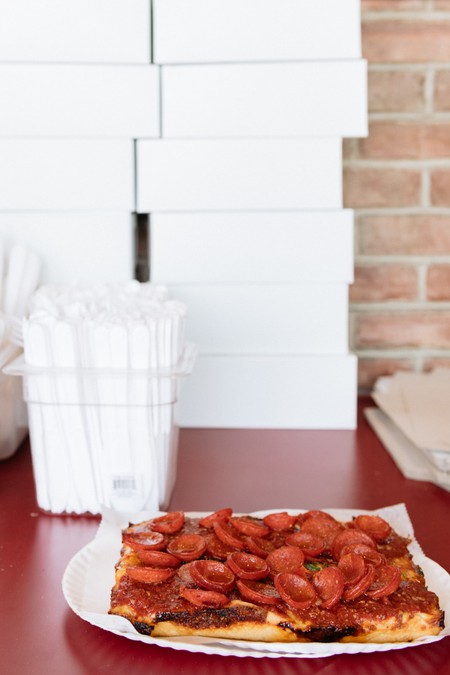 Garcia, too, has tinted Lions & Tigers & Squares with a New York edge. Here, cooks work their way down an assembly line, tossing shredded cheese, rounds of sausage, and whole olives onto pies before loading the double pans into the deck oven. Once removed from the oven, each pizza is sliced into smaller squares and slipped onto a parchment-lined white paper plate. Other than the neon, old-world Times Square-era sign out front, the space is simple. The walls are lined with rock ‘n roll and sports posters, along with a couple of hubcaps. A few red-topped high tables, covered with Parmesan and red pepper shakers, are sprinkled throughout the room, and a narrow counter hugs one wall. Were it not for the shape and size of the pizzas, you might believe for a moment you had dropped into a New York slice shop.

“The way I’m doing it in a quick-service setting, no one does it like that—not only in New York, but anywhere,” Garcia says. “I’ve never seen it done like this, where you come in and there are pizzas on the counter, like a slice shop in New York City. It’s our little New York spin on it.” 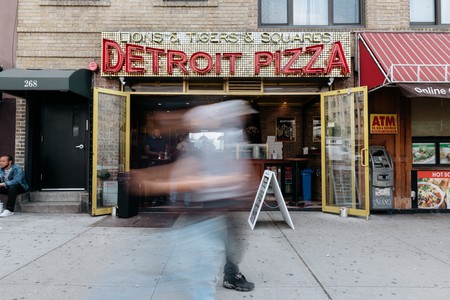 Detroit and New York City certainly seem worlds apart. Detroit, after all, is perched on the base of Michigan, a Rust Belt city and hub for the auto industry. Then there’s NYC: a booming metropolis dripping with affluence and pizza by the slice. Yet here in New York City, both cultures and communities have combined over food, ultimately creating one, big, pizzafied Frankenculture.

“Detroit is going through a revolution,” Garcia says. “I mean, it’s Brooklyn. Detroit’s the underdog: It’s cool. Everyone wants to be a part of it. It’s only a matter of time before everyone’s doing it.”