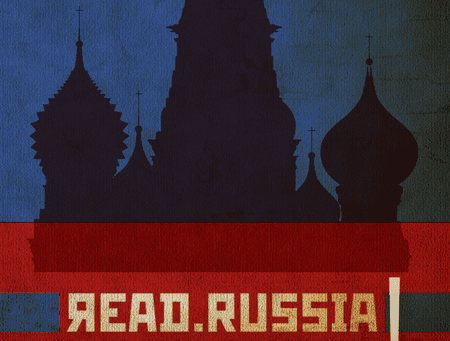 Read Russia logo from its anthology

We spoke with the director of Read Russia, which has assembled an astonishing line-up of participants and events.

In the past few years, an increasing number of contemporary Russian literature has been translated in English. Works by writers such as Vladimir Sorokin, Ludmila Ulitskaya, Mikael Shishkin, Victoria Lomasko, Kirill Medvedev, have been translated and published by American and British publishers with great fanfare. Helping to fan the flames is Read Russia, a initiative and festival launched in 2012 that allies New York, London, and Moscow under the banner of celebrating Russia’s literary culture. This week, Read Russia celebrates its fifth installment, with events taking place all across New York City that will feature translators, scholars, literary critics and publishers of Russian literature, as well as a select gathering of Russian writers.

We spoke with Peter B. Kaufman, the President and Executive Director of Read Russia, about the festival’s roots, its ongoing mission, and what highlights we can look forward to seeing this week. All events for the festival, which starts tonight, are listed below the interview.

What inspired the original Read Russia festival and how has it evolved since it’s first iteration?
What’s inspired read Russia is making up for lost time – the sense that Russian literature, one of the richest in the world, has had no support during most of the Soviet year and the post-Soviet era like Goethe Haus and France Editions. We have sharpened the focus of the program to feature a Russian literature week (which is happening now), the annual Read Russia Prize, and of course the sizable Russian Library project with Columbia University Press. We also have a free anthology of translated Russian literature available online.

Could you talk about the Russian writers that are coming here? How did you come to choose them?
We select the writers and guests based on the books that they have coming out in English, the ability we have to promote new voices, and the connections we sense they might establish with readers here. This year’s guests are no different: Pavel Basinsky is a journalist, literary critic and scholar, and fiction writer who won wide notice with a book about Leo Tolstoy; Andrei Gelasimov debuted as a writer in 2001 with the story collection Fox Mulder Looks Like a Pig; Maya Kucherskaya is a literary critic, professor of literature, teacher of creative writing whose first novel The Rain God won the Student Booker, while her second novel, Auntie Mina, won the Big Book Reader’s Choice Award; Vsevolod Bagno is a distinguished literary scholar and translator of Spanish literature and is the director of the Institute of Russian Literature (aka the Pushkin House); Vadim Levental is a writer, literary critic, and editor whose first novel, Masha Regina (2012), was shortlisted for the Big Book prize and nominated for the Russian Booker Prize, which was followed by a collection of stories called The Fright Room (2015). Marina Stepnova is a novelist and translator whose debut novel, The Surgeon, was published in 2005 then re-released in 2012 after her second novel, The Women of Lazarus, won wide critical and popular acclaim.

What guides the design of your panels or events. Is it a similar format each year? Or is there an underlying theme?
This year we have two themes to pay attention to – the first, how Russian writers or today see the work of the great Russian classical writers that have gone them and that most every American readers knows about. What inspiration have they drawn from these titans? The second is the challenge and the art of translation – we have panels on these topics throughout the week.

What have been some of the struggles and success of increasing readership of Russian literature in translation?
Promoting translated literature is a challenge everywhere – as is promoting cultural understanding. The opportunities for us – and watch this space – involve working with American and British writers and other arbiters of the zeitgeist to promote authors, titles, topics, and conversation!

THURSDAY – MAY 4
5:00 pm
“What is Old is New: On Iliazd’s RAPTURE, the Sensational 1930s Novel”
Tom Kitson, Jenn Wilson
In association with PEN AMERICA and the RUSSIAN LIBRARY
Jordan Center – NYU
19 University Place, New York, NY 10003
RSVP to this event

SATURDAY – MAY 6
11:00 am
“The Politics of Russian Literary Translation: Brunch with the Experts”
“Russian Literature in Translation: Why These Wars? Why Such Violence?”
Oliver Ready and Caryl Emerson
Russian Samovar
256 W 52nd St, New York, NY 10019
RSVP to this event