Past a large Victoria’s Secret display featuring scantily clad supermodels jets out a simple maroon sign. Easy to miss for those who aren’t looking for it, but a beacon to a very New York form of entertainment.

Under the sign and through the narrow door, ascending 32 gray-carpeted stairs brings you into Eastside Billiards and Bar. Established in 1990, the 16-table billiards hall located on E. 86th St. is simple, as pool halls of old were. An employee greets you from behind a small bar to your right. Drinks are straightforward. Food is uncomplicated. Paying to play is easy.

“It’s got a hidden-gem quality to it,” says Ray, the lone employee this snowy midweek evening. “It’s not a sharkish place. It’s for anyone and everyone.”

Eastside Billiards doesn’t have a lot of flair. It’s similar to the pools halls of yesteryear, like those featured in the iconic 1961 film The Hustler. There are no neon lights, fancy cocktails, or loud music. 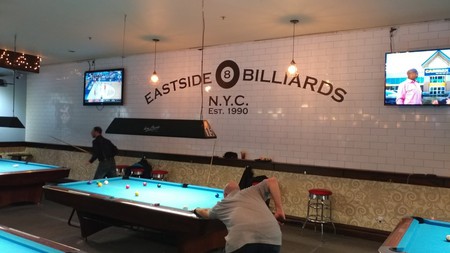 “A place with a DJ is basically a lounge with pool tables,” Ray says as he goes to check on a pizza. “You’re not at a pool hall at that point.”

Pool halls in New York City are as varied as its population. Each has its own amenities and appeal in an effort to attract a crowd.

Located in Midtown West, Space Billiards is a mix of east meets west with sake, neon lights, and techno music. The facility opened in 2006 as more of a traditional billiards hall, but underwent a significant facelift five years later.

“We turned it more into a club,” said manager Jay, whose uncle Mr. Lee was the venue’s founder. “We were trying to change our target customers. We wanted to look more like a club or bar than pool hall.”

Space Billiards is on the top floor of its building located in Koreatown. The elevator button for the 12th floor is in the shape of an 8-ball to make it stand out, though it has competition with The Spot Karaoke & Lounge’s microphone-shaped button on the ninth floor. 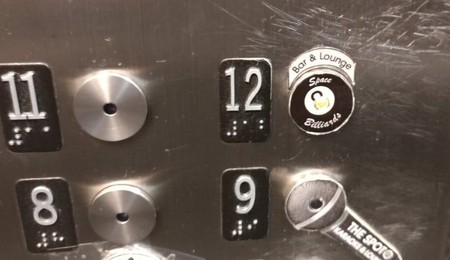 After stepping out of the elevator and into Space Billiards, you aren’t sure if you’ve walked into a pool hall. Neon lights flash all around, upbeat dance music thumps from the speakers, and fancy cocktails flow from the bar. Even the bartenders have electronic scrolling name tags that you have to time in order to read “JOSEPH” properly before it resets and you think his name is “SEPH”.

“One of the perks of the job, you can say,” Joseph says from behind the bar with a laugh.

Space Billiards has 11 tables, each fit with electronic call buttons that alert the bartenders someone is in need of a new drink or has another request. Most of the patrons, Jay says, are non-Korean; the demographic they had been striving for with the renovations, trying to make it equally as inviting for tourists, locals, and Koreans alike. He says the venue is a “blend of Korean culture and American culture.” 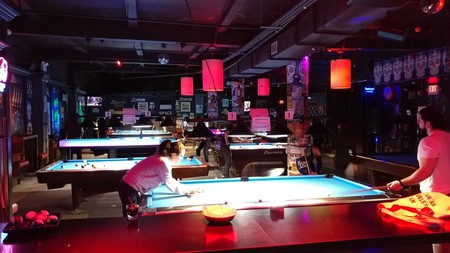 Fitting with its location and the vibe of K-town, Space Billiards offers more than just pool. Jay said Space Karaoke is expected to open on the building’s 11th floor in the spring and they’re looking to expand into Space Bowling in a nearby location in the future.

“The location is awesome,” he said. “We’re the only pool hall in Midtown.”

Despite declining interest in the United States, pool halls remain an integral part in New York City’s nightlife. More traditional billiards halls like Eastside still exist in their quiet, simple fashion, appealing to a crowd looking for just that, while the flashier establishments like Space Billiards are becoming more popular in an effort to appeal to tourists and a younger crowd.

And in a city with some of the most critically acclaimed nightclubs in the world, billiards is a welcomed departure from the status quo.