It should not come as a surprise to anyone that New York has a bevy of wonderful libraries. Most great cities do. What separates NYC from the rest of the pack is not the quantity of locations under its domain (over 220 branches), but the range. It is the wealth of diverse and distinct destinations, both public and private, that separates this city from the rest of the pack. 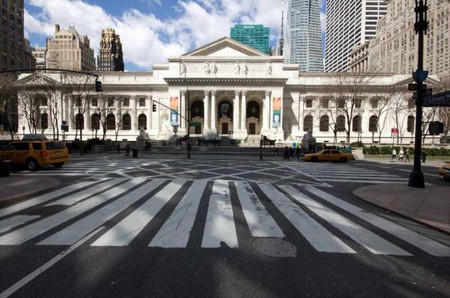 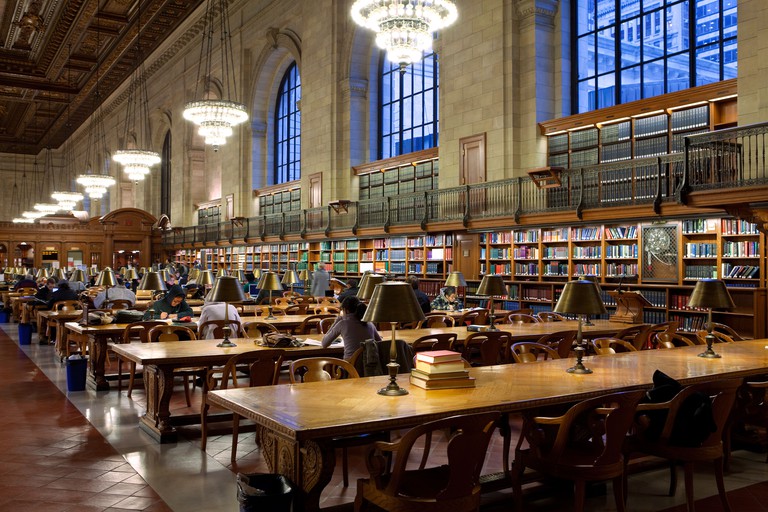 © robertharding / Alamy Stock Photo
Its main entrance is forever protected by a pair of watchful marble lions named Patience and Fortitude. This iconic imagery has made the Stephen A. Schwarzman building the most recognizable library in the world, the crown jewel of the city’s library system. This national landmark was constructed in 1911 with the Beaux Arts style in mind. It contains over 646,000 square feet of space replete with marble and oak interior, stunning giant windows, spectacular staircases and grand chandeliers. The collection and resources here are legendary. The Rose Reading Room is a treasure that cannot be missed. Though it is noted as a premier research library for scholars and students alike, it is still for everyone. There is a local branch station within for general reading and children’s books.

The New York Public Library for the Performing Arts 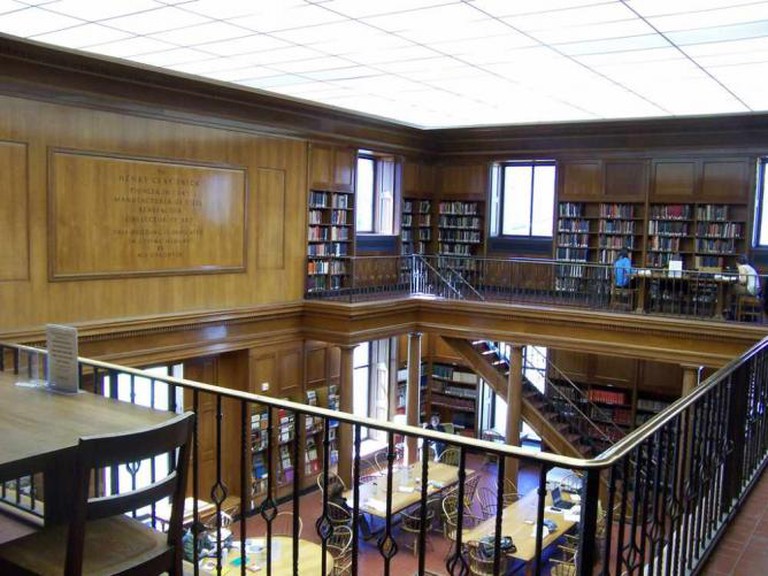 Frick Fine Art Library | © Steven Danna/Flickr
Nestled between Lincoln Center’s Opera House and the Vivian Beaumont Theater lies The Library of Performing Arts. This branch concentrates on the performing arts of theatre, opera, music, dance, video and film. This building houses four distinct research libraries, a general performing arts library for the general public, an exhibition space and a performance theater. It possesses deep catalogs and material on performance subjects. The research libraries are world-renowned for their rare librettos, manuscripts, recordings and photographs. This is a must visit for anyone deeply passionate about the performing arts. 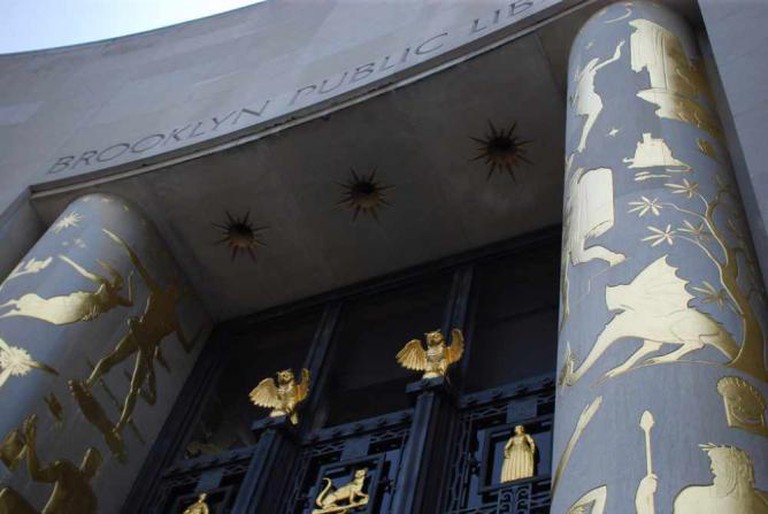 Brooklyn Public Library | © Thomas Angermann/Flickr
Situated within the mansions and stately townhouses along posh Fifth Avenue and Central Park lies The Frick Museum. Considered one the best small art museums in the US, it is known, in most art circles, for its fantastic collection of Dutch masters. This includes three paintings by Vermeer, who only painted thirty-four in his lifetime. The Frick Art Library is an arm of the museum, which is used mostly as a research library for collectors, art students and scholars. The library houses a comprehensive collection of books on topics such as paintings, drawings, and sculpture.

New York City has three separate and independent public library systems. This comes as a surprise to many visitors and even to some New Yorkers. The boroughs of Staten Island and Bronx align with Manhattan, while Brooklyn and Queens stand on their own. The Central Library of Brooklyn at Grand Army Plaza is this borough’s equivalent of Manhattan’s Schwarzman Building and well worth the trip. It was built in the 1930s in the glamorous Art Deco style. It contains a gorgeous lobby and a general plaza that straddles both Prospect Park and the Brooklyn Botanical Garden. Within its 350,000 square feet of space you will find over 1 million items ranging from books, films, music, displays and digital information.

The Morgan Library and Museum

The Morgan Library and Museum is a bibliophile’s dream. The great financier, John Pierpont Morgan wasn’t only a collector of stocks, bonds collateral and businesses; he also had an eye for art and books. He amassed one of the greatest and comprehensive collections the world has ever known. His acquisitions include the manuscripts of such world-renowned authors and artists as William Blake, Lord Byron, Sir Walter Scott, Mozart, Beethoven, van Gogh, Cézanne, Charles Dickens and Henry David Thoreau. The library also contains one of the original Gutenberg Bibles. All of this housed in a gorgeous mansion along Madison Avenue with a reading room to die for. The collection is open to the public, and a must-see for anyone visiting New York The Morgan Library and Museum, 225 Madison Avenue, New York, NY, USA 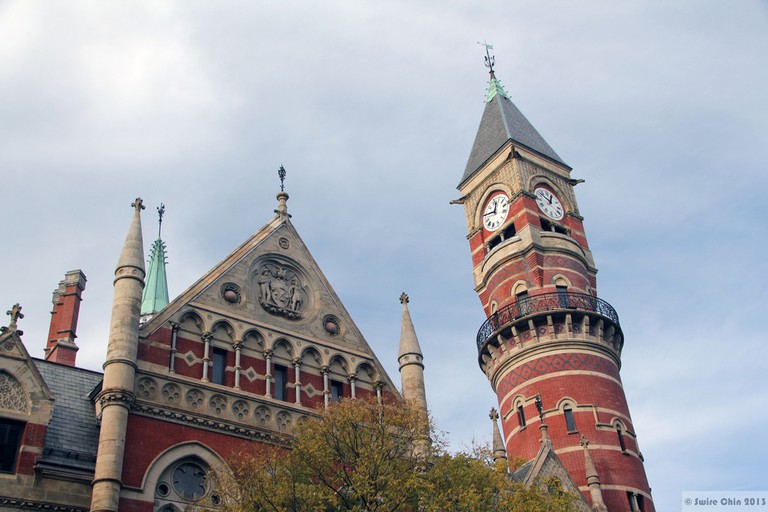 Jefferson Market Library | © Canadian Pacific/Flickr
Though the Jefferson Market Library might be seen by some as just a staple neighborhood library located in west Greenwich Village, the distinct architecture and an interesting history makes it well worth a trip. It was built in 1877 by English architect Frederick Clarke Withers using a style known as High Victorian Gothic. The Jefferson, for its first 90 plus years, was used primarily as a courthouse. Eventually it became vacant and fell into a state of atrophy. By the mid 1950s, the building was up for demolition. Thanks to a great outcry by the general public and local artists (including E.E. Cummings), the Jefferson Market was saved in 1958. It was soon afterward restored and converted into a library. It is now listed as a U.S. National Historic Landmark.

This branch of the NYPL is dedicated primarily to business and finance education. It has a wealth (no pun intended) of resources in electronic, paper and personnel formats to provide education in every facet of business, finance, and economics. The dedicated staff and consultants on hand are adept at providing assistance for every conceivable aspect regarding money matters. From career coaching, financial planning to investment literacy, business strategies and solutions. Lectures, group meet ups, computers, conference rooms for meeting are all made available to the public. When it comes to business, the SIBL is an invaluable resource to leverage.

The Cooper Hewitt Smithsonian Design Library is the premier location for anything you need to know about design. This library is a major resource of books, pictures, prints, serials and trade catalogues on art of design from the present day all the way back to the Renaissance. There is plenty of material on design theory, history, processes, use and patterns on display here. If you wish to visit the library you need to make an appointment in advance stating your affiliation, if you have one, and the purpose of your visit. 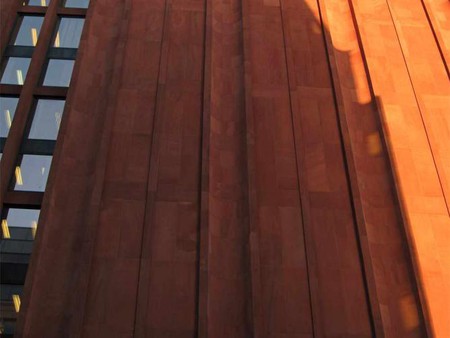 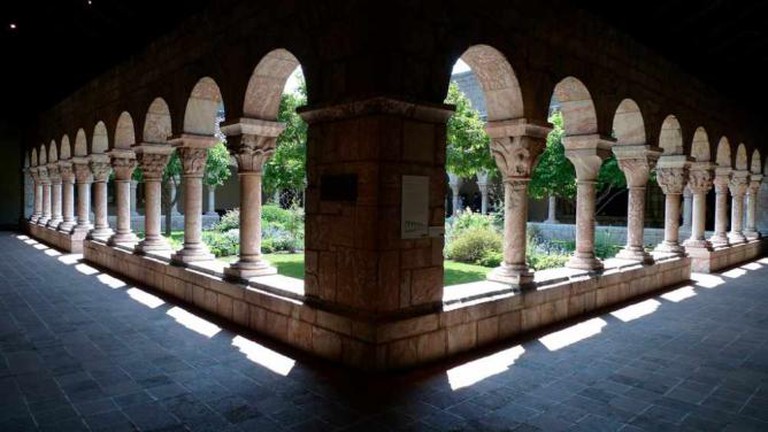 The Cloisters | © Chun-Hung Eric Cheng/Flickr
This architectural marvel was the brainchild of superstar architect Phillip Johnson and Richard Forsti. The Bobst is considered one of the best university libraries in the nation. The 12 stories tall structure contains 425,000 plus square feet of space. It contains eight separate libraries with millions of volumes of journals, books, microfilm, and electronic resources. Primarily used by NYU students, alumni and faculty, researchers, scholars and guests can gain access under the rules of the university.

Library, Museum, Park
Facebook
Email
Twitter
Pinterest
Copy link
Share
One of the greatest art museums in the world also possesses one of the greatest art libraries. Four actually, each of great distinction. The Thomas J. Watson Library is the premier research library regarding books and periodicals on art history. The Henry R. Luce research library focuses primarily on American art. The Nolen Library is open to all visitors. It offers a wide range materials about the museum’s collections and exhibits. The Cloisters Library branch is housed up in Fort Tyron Park. This library collects research materials for the study of medieval art. The collection contains approximately 15 thousand volumes on everything from medieval architecture and paintings to sculpture and tapestries.
Give us feedback