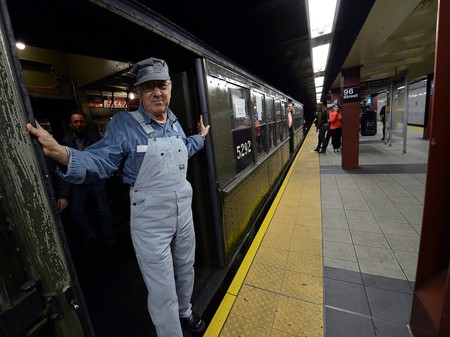 Riding the New York City subway, you can travel anywhere, from the heart of Manhattan to waterfront beaches and, for one month each year, even backward through time. So, climb aboard, retro riders—New York’s secret subway line is back to take you down memory lane.

For New Yorkers, riding the subway is an everyday activity, not an entertainment source. That all changes come November when the MTA New York City Transit rolls out its annual “Holiday Nostalgia” train line. Not your average ride, this line consists of eight vintage subway cars used from the 1930s to the late 1970s. On Sundays from November 26, 2017, to December 24, 2017, modern-day Manhattanites can experience this blast from the past themselves (ideally, in period-appropriate clothing!) thanks to the MTA’s “Shoppers Special” train.

Upon climbing aboard, you’ll feel as if you’ve traveled through time (rather than just to the city’s East Side) thanks to the MTA’s attention to detail. In addition to timeless Christmas wreaths adorning the train’s front and back, you’ll find flawlessly restored yellow-orange seats, in-car ceiling fans, and metal hanging straps. Living up to its name, the “Shoppers Special” features an array of old advertisements, including a 1940s ad for war bonds, promotions for five-cent toothpaste, and posters for “Subway Sun,” the subway’s courtesy campaign in the 1940s. Doors between the cars, which date as far back as 1930, are kept open, allowing you to explore all eight cars and decades worth of history. 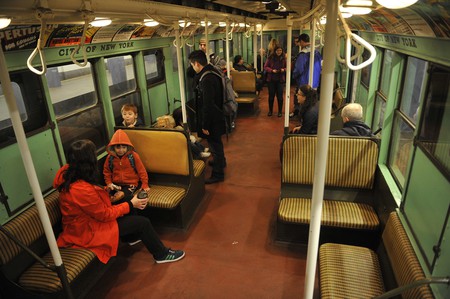 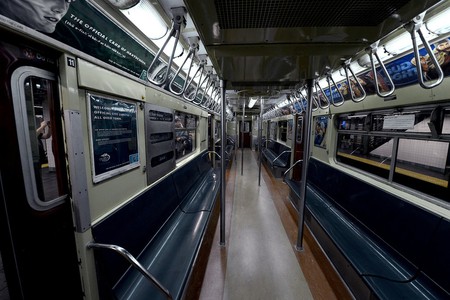 In order to make your commute a smooth one, be sure to plan ahead—as any local will tell you. For your trip down memory lane, you’ll need to head East to Manhattan’s Second Avenue Subway line, where the vintage cars will run from 96 St on the Q line to the F line’s 2 Av stop. Trains will depart from 96 St at 11 am, 1 pm, 3 pm, and 5 pm and from 2 Av at 12 pm, 2 pm, and 4 pm. In great news for nostalgia lovers, you are free to ride the train as many times as you’d like for just $2.75 per ride, the same cost as a standard subway trip. If you happen to miss your train—an unlikely possibility considering the vintage line stalls for several minutes at each stop to allow for photo ops—fear not: you can catch this train anytime at the New York Transit Museum, where the entire line is on display and the New York City of days gone by is always in season.