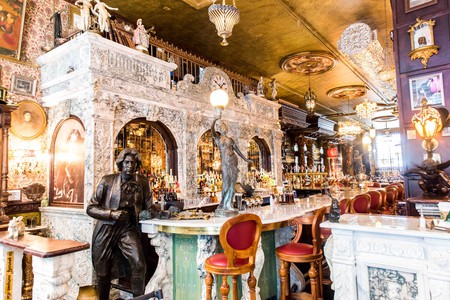 From glittering 1920s inspired décor to chic and airy interiors, these are some of Manhattan’s best new design-led restaurants.

This Parisian-inspired dining experience located at 138 Layfayette Street in SoHo is a prime spot for an elegant brunch photo. The interiors, designed by Roman and Williams, evoke a “gracious modern nod to fine European gastronomy, with crisp linens, flickering candles and whitewashed brick.” The airy, polished design offers a lively ambiance that is sure to add a little sparkle to your #dreaminteriors selfie.

The Bar at Temple Court

The major design feature of The Bar Room at Temple Court is its nine-story Victorian-era atrium. You can either look up to catch a glimpse of the stunning stairwell, or take a bird’s eye view of the eclectic design from one of the stairways. The old world scene is furnished with heavy rugs and deep set blue, orange, and green armchairs for a luxurious lounge experience.

Our lounge looks good from every angle. (Photo: @juliettelonguet)

Don your formal, festive attire and bid farewell to 2016 at @thebeekmanny with live music, late night snacks & a Champagne toast at midnight! // Join us for a five course dinner in @fowlerandwells and a night of festivities for $500 a person or come for just the party, starting at 9:30pm for $275 a person // Call 212.658.1848 for details & to reserve 📷 by @mlhaupt77

Dedicated to the literary dandy Oscar Wilde, this new Victorian-themed bar in NoMad is jam-packed with hand-selected antique artifacts in a gilded, glittering setting. Design elements include a 19th-century Belgian piano, an old English standing clock from the 1880s, Vietnamese carved marble, a stunning grey antique fireplace, and hand-painted stained glass. Every detail—from the golden swan bathroom faucet, vintage wallpaper, and eclectic wall fixtures—spells out a vivid design story that begs to be photographed.

Thank you, kindly, #FlorenceFabricant for including yours truly within the ranks of amazingly talented company. Please do read on for the magnificent feature in this week's "Off the Menu" from @NYTimes. http://nyti.ms/2uYXgXd

The opening is nearly upon us – in the meantime, please do visit our website for 10% off your next meal at either @LilliesVictorian or @PapillonBistroBar ( + a complimentary cocktail when we open)! Click through via link in bio.

Augustine, a French brasserie located inside the Beekman Hotel, has some seriously impressive décor chops. In March 2017, The New York Times’ critic Pete Wells called it the “prettiest, giddiest interior,” and goes on to describe the whimsically painted glazed tiles, depicting pink and white cockatoos and tiger lilies, and vintage Paris vibes. “Like a garden out of Fragonard…in the warm honey-colored light,” he says. “It’s a space that makes you feel, as Holly Golightly put it, as if nothing very bad could happen to you there.”

The tables are set for brunch — now open Saturdays and Sundays 10am to 3:30pm #augustinenewyork (photo: Jacob Cohl)

Inspired by the “glorious decadence of Prohibition-era Cuba, when ‘dry’ New Yorkers flew to the ‘wet’ island nation for strong libations,” BlackTail gives off lush, nostalgic design vibes. Located at 22 Battery Place, on the second floor of Pier A Harbor House, this Havana haven is sure to up your Instagram game with its colorful cocktails, hat-clad bartenders, and tropical details. Highlights include brass plaques of autographs of Cuba-frequenting celebrities, such as Ernest Hemingway and Al Capone, a statue of Cuba’s “liberator” José Marti on horseback, and custom-made stools which mirror the chair designs found in Hemingway’s favorite Havana bar.

Pink, pink, and…more pink. This all-pink Italian restaurant in Nolita was made for Instagram. From the custom-made furniture to the ’50s style décor and the cheery rose hues, Pietro Nolita is a little “jewel box” that begs to be photographed. The design pairs especially well with a glass of rosé and a few girlfriends—but you were probably already planning that.

This bi-level Chinese restaurant is actually housed in a former opera house. Not only is the chic, industrial décor and romantic setting Insta-worthy, the food is served on picture-perfect clayware. According to one critic at Eater, the luxurious design looks as if it cost millions, with its sleek wooden chairs, circular booths, and “magical” lighting.

Thanks for the pretty pic of our dining room @aguynamedpatrick! Such a pleasure having you and @paulandrew!

Now this is how you do dinner.

Just over a week ago we were hosting an event for @jhilburnco. The room looked beautiful, and so did they. Thanks for coming through friends!