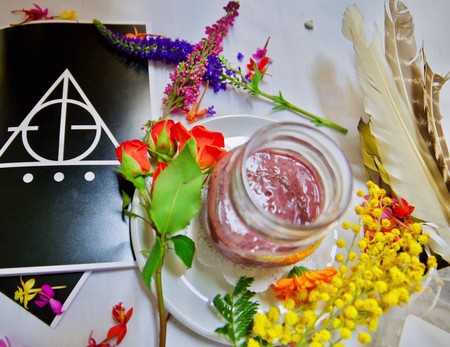 It’s a Thursday evening on the Upper East Side and a fashionable crowd is tucking into the first of seven courses—vegetable balls with beetroot humus and pink-petalled edible flowers. They eat to the slow steady beat of a drum, as hostess and VIBErant EATS founder Tatiana Revox circles each table, gently tapping the instrument over and around the diners. This dish, she explains, was inspired by the root chakra—the lowest energy center situated at the base of the spine, commonly associated with security and stability.

For those who aren’t familiar, the chakras are seven colorful wheels aligned vertically down the mid-line of the body, from the crown of the head to the sacrum. According to the tantric religions of ancient India, each one links to certain qualities, as well as anatomical locations, and by maintaining an unimpeded flow of energy through all of them we ensure our good health.

Revox has always used food as medicine, and VIBErant EATS felt like the perfect way to marry her career in hospitality with her interest in holistic wellbeing and healing modalities. To develop the menu—seven small dishes corresponding to the seven chakras—she started by listing foods with traits which embodied them. “Beginning with the root chakra, you want to eat more root vegetables, and as you go up you want the foods to become lighter,” she explains, referring to the increasingly airy attributes of the chakras as they ascend. “We played with different ideas and combinations. We really wanted to stay true to the concept of eating colorfully and having a vibrant diet—three colors at every meal and you’ll be healthy.”

The idea of a plant-based, chakra-themed dinner is pretty “wellness-y” on its own, but Revox took it one step further, by introducing sound healing to the equation. Each course is accompanied by music that provides more than just background ambience. “The lower sounds [like the drum] are for the root, and the sparkly magical unicorn sounds are for the crown charka, so you definitely go on a journey,” she explains. 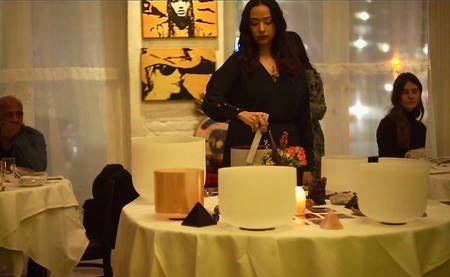 Thanks to undersized apartments and exorbitantly priced groceries, New York City has a strong culture of dining out at restaurants. Grabbing a quick bite, the server making everything as streamlined as possible so s/he can free up the table for the next customer, is how most people eat here, but VIBErant EATS is an entirely different experience.

This is a menu that was genuinely constructed with love. Each ingredient was chosen for more than its nutritional value alone, and every dish is symbolic. In between trading recommendations, tips and advice, diners pause to learn about what they’re eating and why. There are breaks in conversation as people close their eyes and absorb the subtle vibrations emanating from Revox’s musical instruments. This is dining for the mindfulness crowd.

Revox’s plan is to take VIBErant EATS around the city, popping up in different neighborhoods and making it as accessible as possible to all New Yorkers. “I’m doing this for the people, it comes from my heart,” she explains. “I want to build that family that’s judgement free, which is important in the wellness world. We’re all just looking for a deep connection to other people and I think VIBErant EATS can be that container for New Yorkers to connect.”