Are You Sober Curious? Why Now Might Be The Time To Quit Booze For Good 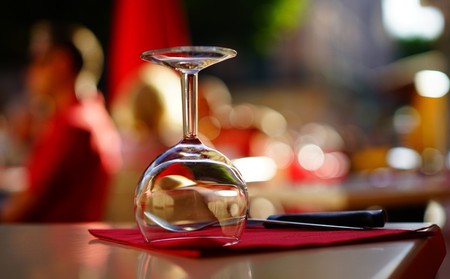 Plenty of us will have made a half-hearted pledge to go ‘dry’ this month, while fully expecting — if we’re honest — to fall off the wagon by mid-month. But a curiously fashionable sober scene is emerging in New York and beyond, with a growing number of mindful millennials making a commitment to abstain from alcohol on a more permanent basis.

Whilst for many it sounds like social suicide, the trend of sobriety has been bubbling under the city’s hedonistic high-rise surface for some time. Initially popular amongst wellness crowds, alcohol-free events have started to pique serious interest outside of these circles — so much so that this year ‘sober’ might just go mainstream.

The Juice Crawl and other specifically designed sober socials such as The Shine, CLUB SÖDA NYC and The Softer Image are popping up all over town in response to this growing demand. Offering healthy refreshments, entertainment, and nearly always a guided meditation. Some occur bi-monthly, while others happen as regularly as every week. All promise a heady evening minus intoxication. 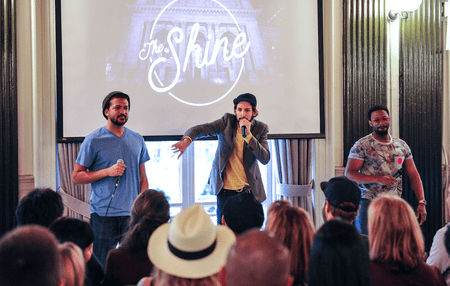 Courtesy of The Shine

The rise of generation “sober curious”

So what is causing this wave of the so called “sober curious” who are choosing to get their kicks from meditation and frequent bars that serve “mood enhancing” herbal tonics instead of sticking with the dizzy buzz alcohol has traditionally provided?

Andrea Praet, a trend strategist and co-producer of The Shine, has watched the trend grow. “It first started to emerge in 2004 when trend forecast sites would suggest going away to spa retreats in Bhutan as the next big thing,” she says. “But it really grew legs as the recession hit in 2007. Drinking green juice, working out and looking after your body became a status symbol that was less ostentatious than parading around a Birkin bag.”

Whilst it all started in quite a vain way, Praet believes it has evolved and become “more mature, deeper and meaningful as people feel a need to counterbalance today’s social noise. There is a need for greater connections in today’s digital age.” 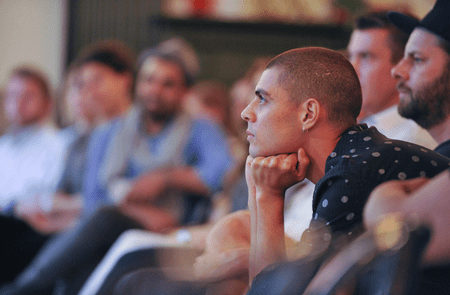 Courtesy of The Shine

This wellness revolution is making people more aware of how their lifestyle choices affect their overall sense of wellbeing, believes Ruby Warrington, co-founder of CLUB SÖDA NYC. “Nine times out of 10, drinking does not align with the feel-good factor that comes from cleaning up your diet and taking up yoga and meditation,” she explained. “The huge uptake of mindfulness practices has led to people beginning to question how alcohol REALLY makes them feel, i.e. generally not great!”

“Wellness has given people context,” adds Luke Simon, founder of The Softer Image – a series of events that describe themselves as “raising the vibe of nightlife” using “healing modalities and superfood herbal libations.”

“Feeling good” has become a priority for people as wellness has come to the forefront of the culture and it’s happening at a global level, not just in New York. Light Watkins originally launched The Shine in LA before working with Praet to bring it to NYC and CLUB SÖDA NYC will launch its first London event later this month.

THURS Eve party and talk about living awake and not drunk this holiday season 🎅🔮✨ hosted by #clubsodanyc with @the_numinous & @guidedbybiet in the west village 7-9. Tickets available at mocktailsdreams.splashthat.com #linkinbio [image 💟 @thesoberglow]

Alcohol gets in the way of personal progress

At a time when wellness is as desirable as wealth – if not more so – personal growth, self-awareness, and the aspirations to improve are ranking high on everyone’s agenda.

Combined with a heightened sense of awareness and desire to connect in more deep and meaningful ways, alcohol is no longer a social lubricant but a hindrance to personal progress, whether that be related to relationships, career, health or finances.

Rachael Williams, an account manager, 30, describes her ex-relationship with booze as “very tempestuous and quite destructive. I became aware about five years ago that all of the bad things that had happened in my life or the bad decisions I’d made were down to alcohol and/or being drunk.”

“Binge drinking and being hungover would set me back both mentally and physically” says 33 year old PR, Bobby Mayamey, who quit alcohol last June. “My sleeping patterns would be all over, my thought processes slowed, and I wouldn’t be able to make the physical gains I wanted to in the gym.” 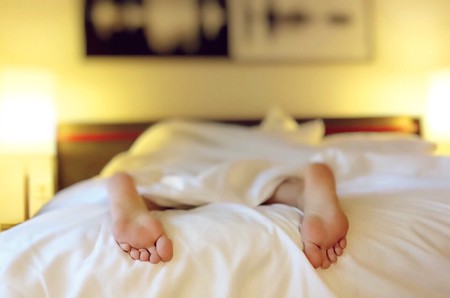 “We live in an increasingly entrepreneurial climate, and days lost to hangovers are just not an option when you’re on a mission to bring your business or big vision into the world.” adds Warrington.

It’s important to note that the emerging social scene is not a substitute for AA or a place to “get sober,” notes Warrington, whose own experience with alcohol led to the creation of CLUB SÖDA NYC.

After a five-year journey of “steadily unpicking deeply ingrained habitual drinking patterns” she ended up at AA but found the format didn’t really work for her. “I never had a ‘rock bottom’ with my drinking, and the label ‘alcoholic’ didn’t feel like my truth,” she explains. “It struck me that there was very little in the way of a middle ground – a space for people to investigate more conscious approaches to drinking. It also felt like there was so much stigma attached to the idea of sobriety. I wanted to create a space to bring this conversation out into the open, with the hope of inspiring people to become more mindful about their drinking choices.”

Praet and Warrington both make it clear that neither have fully given up alcohol but will instead choose to drink consciously –i.e sparingly to toast an occasion, and with intention.

The case for going booze-free

Rion Willard, a 34 year old architect who gave up alcohol three years ago following a 10 day stint at a monk-led silent retreat, saw his career gains happen quickly. “I started my own business about four months after I stopped. I left my job and found I had so much more confidence and aliveness,” he says.

Warrington elaborates: “the biggest benefits for me have been the underlying sense of positivity, calm and fearlessness that come from not drinking. Extended bouts of sobriety leave me feeling bulletproof – invaluable both as an entrepreneur, and also in the face of the bigger picture problems we are looking at in 2017 and beyond.”

So what are the chances we’ll all join the sober revolution? It’s hard to say. There’s still enough of us who feel less afraid of Sundays that ritually revolve around having “the fear” than the unknown territory of what our social lives and friendship groups look like sober. But with a growing variety of events to choose from, all of which promise the highs of alcohol without the hangover, we definitely think it is worth a try – for January at least.