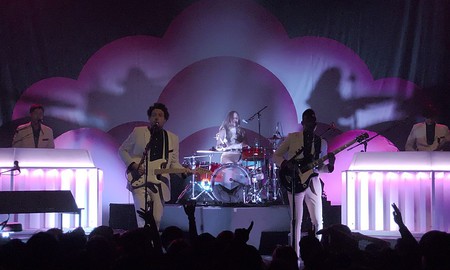 Metronomy playing at the Fonda Theatre in Hollywood (2014) | © Junkyardsparkle/WikiCommons

‘It feels sooo gooood… in the bay!’ So splashed Metronomy on their aptly-named 2011 single, “The Bay,” an album that soundtracked two consecutive summers for the young, urban, and somewhat hip crowd (it only became a thing in the U.S. a year later in 2012). The bay in question turned out to be The English Riviera, a disappointing tidbit which did not hinder the LP’s worldwide success and, in fact, may have helped (the song mentions only five cities as not being the bay, and this author knows a few people who thought this made New York the centre theme). A fantastic hit, then, after which the band found themselves unjustly retreating into the mild indie obscurity whence they came. This is the story of their follow-up, Love Letters, an underrated masterpiece of an album. 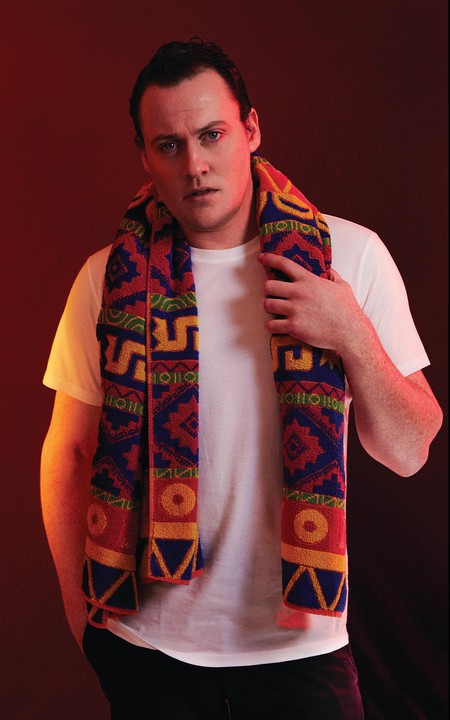 It’s not exactly easy to get music right after unexpected success. Some of the most spectacular free falls, from Terence Trent D’Arby to The Klaxons (no, no, sorry, we didn’t mean it), have been the result of strangled-out cock-ups recorded in lieu of second albums. Why, even David Bowie considered the follow-ups to Let’s Dance to be his worst works – though, mind you, that’s not saying they’re bad. The point is that there’s simply no good formula for a triumphant second effort; whether sticking to the same sound or going for that experimental double-drum solo, musicians often find themselves succumbing to the ‘fickleness of popular tastes’ (or whatever it is they want to call it) if their art isn’t up to snuff.

So what did Metronomy do? They went for the second approach. While The English Riviera is a gentle electro-indie ode to frontman Joseph Mount’s childhood haunts, complete with two or three pop classics, Love Letters is a dark, minimalist rumination on break-ups (or rather, we think, on one in particular). As expected, there is little room for a dance number of the magnitude of ‘The Bay’, and its placeholder – a modest neo-soul single from which the album takes its name – serves, if anything, as a reminder. If this reads as if Love Letters is a concept album, it’s because it probably is. Thankfully, Mr Mount has yet to fall low enough to describe it that way, so we can do like the rest of its reviewers and forget the detail.

In order for minimalism to be done right, it is absolutely necessary for the songwriting to be top notch. You may think that that’s too obvious a statement (it is), yet the wisdom here is one often neglected by adepts of the genre… Musicians find it easy to lose themselves in spaced-out reverberations (and other products of their amazing creativity), never to remember, it seems, they were writing a song in the first place. Not so for Metronomy. You’ll be happy to hear the band’s stripped-down sound serves to bring out what has always been their trump card – some well-placed, and truly remarkable, harmonies. Take the album’s first single (‘I’m Aquarius’): Built upon a menacing retro groove, the song climaxes solely on synthesizers and repeated vocals, an economy of style which doesn’t affect its depth, and allows a certain eerie anguish – so typical of the end of relationships – to be felt at full force. Now that’s minimal.

What makes this record special, however, is the fact that the rest of the album works in precisely the same way. The majority of its songs are constructed on awkward, retro pieces which slowly veer off trajectory to reveal a certain underlying drama. If this initially makes for laborious listening, the music always manages to transform. Its results are the fantastic endings to ‘Call Me’ and ‘Never Wanted‘, or the lyrical choruses of ‘Monstrous‘ and ‘The Upsetter‘. Granted, this makes it very far from an album you’ll love at first listen… rather, it’s one you’ll learn to adore over time. In short, it’s the complete antithesis to pop music.

Even Love Letters’ two outliers, ‘Month of Sunday‘ and ‘The Most Immaculate Haircut‘ (whose production resembles The English Riviera’s ‘Trouble‘), become charming only after little tragic twists: dramatic chorus for the first, vocal heroics for the second, and a massive outro for both. It is, in essence, the selfsame formula used in the rest of the album, and just as effective – their more straightforward instrumentation only helping to demonstrate the quality of Mount’s songwriting.

Principal critics, besides the ever-irrelevant Pitchfork, rightly praised the album, even if commercial returns proved to be mediocre (as expected). After all, this was far from its hit-filled predecessor – a little patience is necessary to appreciate it. With the impending release of the band’s fourth album (Summer 08 – listen to it funky first single here), however, we feel there couldn’t be a more opportune moment to rediscover Love Letters for all of its understated majesty. We promise you won’t be disappointed.