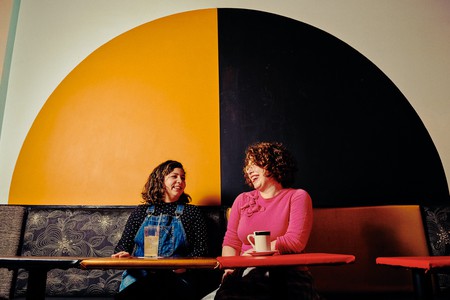 Ovenly, Butter & Scotch and Mimi Cheng’s are three women-led culinary businesses in New York City. Each have faced challenges in a male-dominated industry yet have emerged as inspiring leaders and mentors for women.

Founding a business is no small feat. Founding and operating a business as a woman, especially, is hardly a walk in the park. More than 60 percent of US businesses are male-owned, and while between 1997 and 2017 women-owned businesses in the United States increased by 114 percent to 11.6 million businesses, they employ only a small sprinkling of employees and contribute a measly percentage to the country’s business revenue. 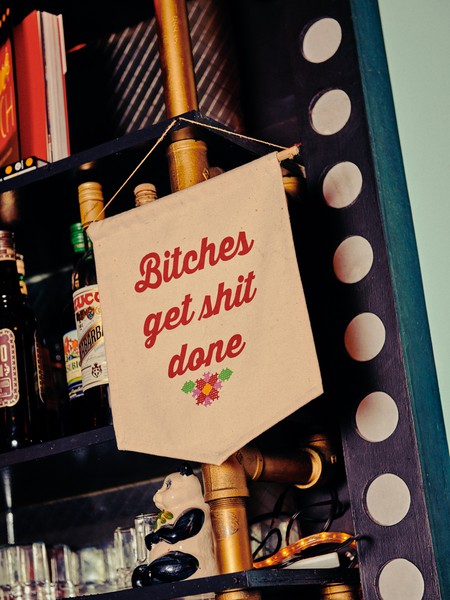 Even so, women-led businesses are still growing, especially in New York City, which touts the highest number (over 400,000 businesses), followed by Los Angeles and Chicago. The culinary world in particular has seen a steady rise of New York City-based female entrepreneurs, some of whom have opened brick-and-mortar establishments or specialize in direct-to-retail products, like Basbaas Sauce and Sam’s Granola.

Butter & Scotch, Mimi Cheng’s and Ovenly are a few of the women-run businesses you should be patronizing on International Women’s Day (and which should become part of your rotation thereafter). They’re led by incredibly valiant, savvy and undeniably hungry women.

“A lot of people call it Disneyland for adults,” Keavy Landreth says of Butter & Scotch, the dessert and cocktail bar she founded with co-owner Allison Kave.

Butter & Scotch’s likening to an adult’s paradise is certainly precise. The sliver of a space in Crown Heights, Brooklyn, has become a bona fide destination for sweets – think towering slices of chocolate cake adorned with gold sprinkles, and wedges of s’mores pie, the marshmallow top wonderfully charred and warm – as well as speciality cocktails. 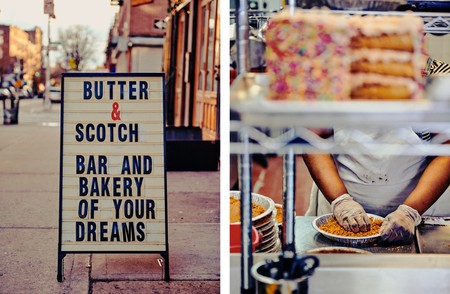 Long before Butter & Scotch was a concept, Kave and Landreth were separately running businesses at Brooklyn’s Smorgasburg, the largest open-air food market in the US, nearly 10 years ago. (Landreth hawked cupcakes and Kave sold pie.) Soon they were introduced because of their burgeoning similarities: two women at the same place in their careers, each operating a small baking business. One night as they nursed a pitcher of sangria, the pair landed on the idea of fusing a cocktail bar with desserts – someplace inclusive that could be frequented for a cookie or a drink.

In its continual celebration of women, the bar flaunts a shifting cocktail menu (the first iteration was a response to the 2016 US presidential election, for which Kave and Landreth crafted a menu highlighting women), each with a different theme: there might be politically inspired drinks, like Smash the Patriarchy; cocktails commemorating pop culture like Madonna, Rihanna, Ilana (a nod to Broad City); or ones reveling in the work of female artists, like Frida Kahlo’s Viva La Vida. One dollar from every drink on the rotating seasonal cocktail menu is donated to Planned Parenthood. 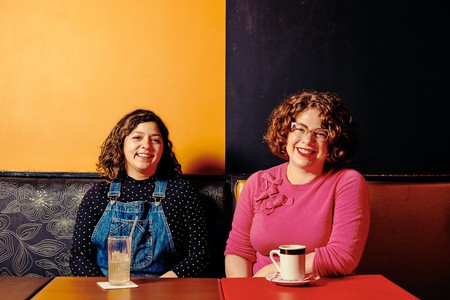 “When you go through times of political crisis and see we sell cake and cocktails, we’re not on the front lines, per se,” Kave says. “But to be able to make people happy and still be a space for hospitality, indulgence and celebration, while also adding in this layer, felt really rewarding for us.”

But everything at Butter & Scotch hasn’t always been sweet. When Kave and Landreth were initially building the business, they were shocked to see first-hand how difficult it is to be taken seriously as female authority figures.

“We all experience [sexism] every single day,” Kave says. “We all have to be more conscious and try to counteract it.”

Kave and Landreth have made sure to foster career paths for their female staff, encouraging them to shift their jobs into something more multifaceted. Steph Gallardo, Butter & Scotch’s general manager, who began as a line cook and moved up the ladder, is a prime example. 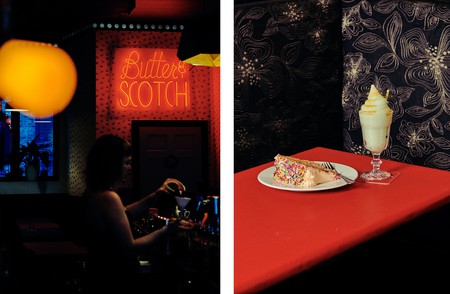 “I’ve seen that I’m not just a baker; I can do other things,” Gallardo says. “I can be a powerful woman [who] can bake, run a business and manage people.”

Kave, Landreth and Gallardo hope to counter the food industry’s archetypal sexism by furthering Butter & Scotch as a welcoming community space – one that praises and rejoices in all that women can do.

After their parents moved to the West Coast, sisters Marian and Hannah Cheng found themselves constantly craving their mother’s Taiwanese dumplings.

“We were hungry for the type of food we grew up with, and we couldn’t find anything similar [in New York],” Hannah Cheng says. “Nobody else makes it the way your family does.” 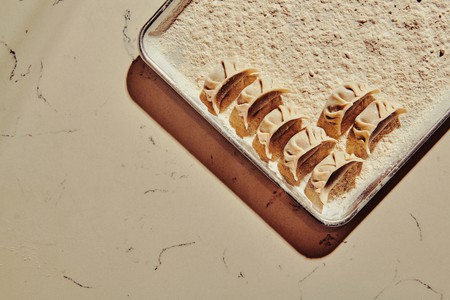 So the sisters left their high-powered jobs in fashion and on the trading floor to open their own restaurant – one that serves the kind of food they grew up eating. Here, the kitchen delicately pleats dumplings, jamming translucent wrappers with ingredients like organic chicken and pork, zucchini, ginger and bok choy. Dumplings arrive simply steamed or fried to a crisp golden brown, to be immediately slathered with Mimi’s crimson-stained secret sauce. 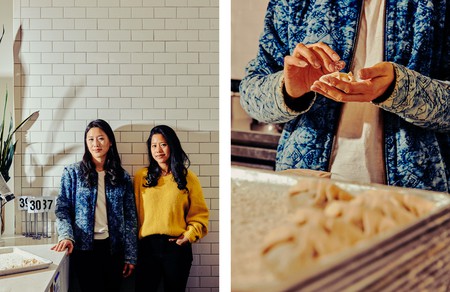 Although Mimi Cheng’s has grown from one shop in the East Village touting its beloved dumplings to a second outpost in Nolita, it hasn’t been without obstacles.

“When we first started, we were 28 and 26. [The contractors] were getting bossed around by someone who’s in their twenties,” Hannah says. “There was a bit of a power dynamic going. They were trying to downplay anything [we] were saying. If I had a male persona, it would [have been] way easier.” 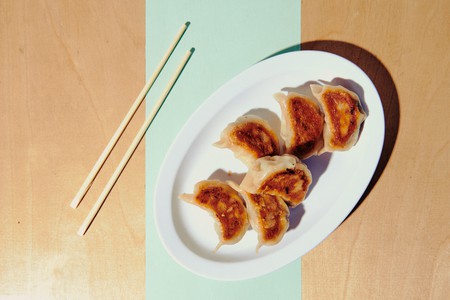 Dumplings can either be fried or steamed, packed with pork, chicken, bok choy and zucchini | © Louise Palmberg / Culture Trip

“That [incident] shouldn’t discourage people from doing something,” Hannah says. “Other women can see that women are doing interesting stuff. It makes it seem less foreign and more approachable.”

Agatha Kulaga and Erin Patinkin began as many small baking business owners do: spending long nights creaming butter and sugar for scones while simultaneously developing prospective financial models. But as Ovenly transformed over the years, so did Kulaga and Patinkin.

“Agatha and I are not bakers,” Patinkin says. “Yeah, we baked for a couple of years. But we started this company to own a company.” 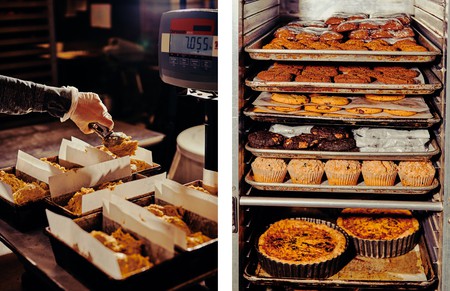 Kulaga and Patinkin can quickly recount infinite stories of being diminished as business owners, simply because they’re women. They’ve been referred to as girls and reduced to helpless, quaint workers – despite managing a staff of 65 people and having hundreds of wholesale clients.

“There’s a socialization around baking where if women own a bakery, they must be putting on an apron,” Patinkin says. “There’s a difference in being a baker and being a CEO.” 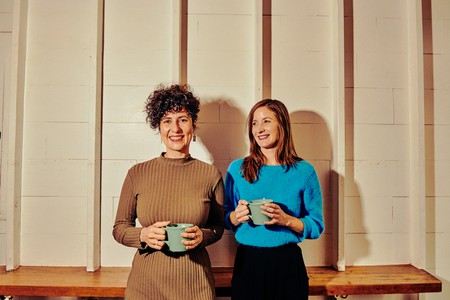 It’s abundantly clear that Kulaga and Patinkin are sharp business owners. Ovenly has grown tremendously since its arrival on New York City’s bakery landscape in 2010, morphing from a small wholesale operation with one shop in Greenpoint, Brooklyn, into a prodigious company boasting hundreds of wholesale clients and six brick-and-mortar locations by the end of 2019. You’ll often stumble across their blueberry cornflake muffins and secretly vegan chocolate chip cookies in countless coffee shops around the five boroughs. The company has transformed into more than just Kulaga and Patinkin, who have developed programs for the growing Ovenly staff, something they’ve dubbed as radical responsibility.

Both women come from respective backgrounds of social work and social-justice programming; at Ovenly, they offer jobs for the formerly incarcerated and people who have been denied equal economic opportunity, boast open-hiring practices, and guarantee everyone is paid above living wage and receives vacation days. Plus, they source solely all-natural ingredients and have drastically decreased their landfill waste; recently, all their locations eliminated plastic straws. 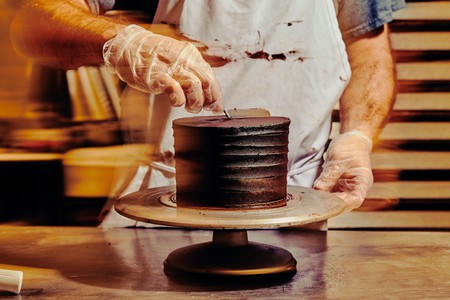 Along with its pastries, Ovenly also focuses on what the owners call radical responsibility | © Louise Palmberg / Culture Trip

But despite all the incredible social and sustainable-impact work Kulaga and Patinkin have accomplished, people often denote it as simply women’s work.

“That is the stereotype of women: this idea of wanting to do good things for the community or their staff and business,” Kulaga says. But the women are adamant that this kind of work is not something that should be reduced to this feminine cliché. After all, so many other people have come to Ovenly with praise. “People came to us and said, ‘You’re doing something that’s so different from everyone else. Thank you for that,’” Kulaga says.

Thanks to Ovenly’s success, Kulaga and Patinkin have evolved into new roles: mentors for aspiring female entrepreneurs. They informally advise other women, providing suggestions and offering guidance for future and current business owners.

“We need to have a shift in mentality as women that our ideas are valuable, and we should be selling them like every other entrepreneur in the world,” Patinkin says. “We have so much more power than we realize.” 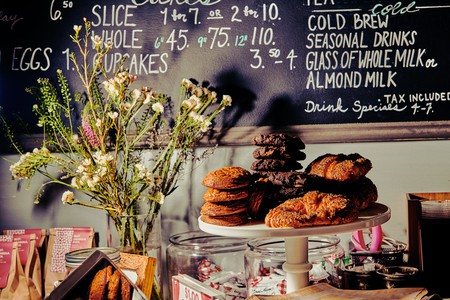 The savory and sweet products are geared toward everyone, arriving in gluten-full, gluten-free and vegan iterations | © Louise Palmberg / Culture Trip
Give us feedback