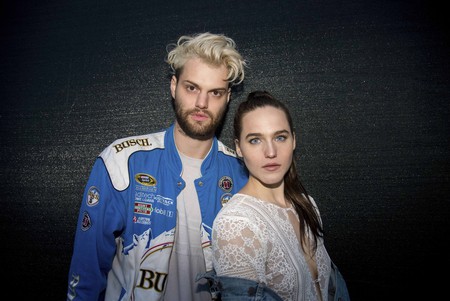 Competing in a streaming world often leaves musicians feeling like a herring struggling for food in a massive school. In this sea of diminishing returns, many artists are looking to advertisements and TV or film spots to help boost their profile, and few are more coveted than an Apple placement.

In case you somehow missed it, Apple announced two new iPhone models on Tuesday: iPhone 8 (along with iPhone 8 Plus) and iPhone X. The latter presents the most complete redesign of the company’s product in quite some time, so it naturally stole the show, and along with it came this nifty ad.

Apple has been enjoying their rapid text commercials lately, and I think it is safe to say that the customers feel the same way, but the catchiest part of this particular advert is undeniably the Animoji-lip-synched song tracking it: “Best Friend” by Sofi Tukker.

Comprised of Sophie Hawley-Weld and Tucker Halpern, the New York-based duo were once on separate paths destined for Brazilian yoga instructor and professional basketball, respectively. However, after an illness ended Halpern’s court dreams, he took up DJing and soon encountered Hawley-Weld during their senior year at Rhode Island’s Brown University. Hawley-Weld was performing acoustic bossa nova music at an art gallery event and Halpern was that evening’s DJ. They have been collaborating ever since.

Featuring The Knocks, NERVO, and Alisa Ueno, “Best Friend” is a bass-driven booty shaker, rounded out by warm horn bursts, call-and-response vocals, and tinny percussion. “Addictive like some Pokemon” as Ueno suggests during her break, the song is, obviously, dedicated to friendship. Speaking of their collaborators in the YouTube video’s description, Sofia Tukker wrote:

“Our friendship with The Knocks is what gave us the confidence to pursue a career in music, thank you Broc and Jpatt! NERVO, newer friends, inspire us and motivate us to push ourselves and be relentlessly positive, thank you Mim and Liv! Alisa Ueno is a brand new friend who we share a ton of mutual friends with and we are also building a new friendship with Japan. We are so looking forward to going back! This track is especially fun because now we have an excuse to perform together, shoot a music video together and generally share the joy of music with some of our favorite people.”

While Hawley-Weld and Halpern are destined to make their mainstream break in the next year or so, the duo already has a Grammy nomination under their belt, earning a spot among the five records in contest for the Best Dance Recording at this year’s ceremony for their track “Drinkee” (the award went to The Chainsmokers).

The debut single from their Soft Animals EP, is based on the poem Relógio by the Brazilian-Portuguese writer Chacal, and is even partially sung in Portuguese. Such international influences among their music make sense considering that one half of the duo, Hawley-Weld, was born in Germany, attended international schools in Brazil, Italy and Canada and, while in college, studied West African dance and drumming.

Jam out to Sofi Tukker’s jungle pop sounds and expect their debut album, or at least a new EP, to follow “Best Friend” in the near future.