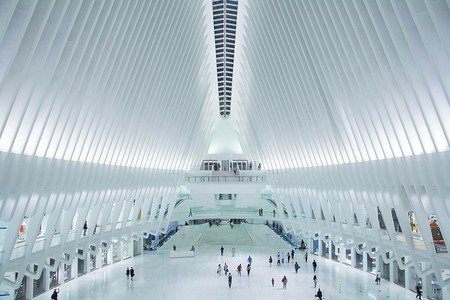 Even sans sensually-parted, brightly-colored lips or bedroom eyes covered in glitter, a hypnotic video installation on view at Westfield World Trade Center has Marilyn Minter all over it.

Aluminum letters “ME” splash and submerge into a bubbling reservoir of viscous silver goo. I’m Not Much but I’m All I Think About is the title of this slow-motion video created by celebrated feminist artist Marilyn Minter in 2011, reprised as her largest-ever public art installation in New York City. 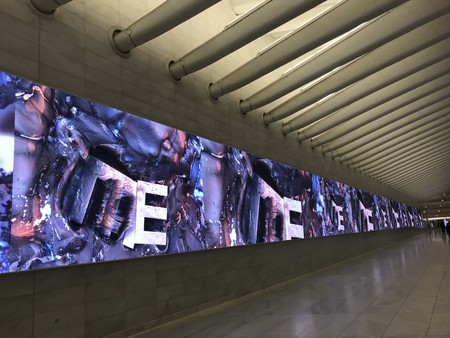 Marilyn Minter, I’m Not Much But I’m All I Think About. Courtesy of the artist and the Art Production Fund.

In the Art Production Fund’s announcement, Minter expressed her curiosity to see I’m Not Much but I’m All I Think About projected on such a large scale within a space of this magnitude. “I’m interested [in]…the impact that this slow-motion imagery will have in such a fast-paced environment. I hope it pulls people in and subsequently disrupts their routine.”

The installation will undoubtedly grab the attention of passersby; running along an underground concourse and featured in one of the mall’s central spaces, Minter’s work loops across 19 advertising screens throughout the colossal center’s digital media network—one installation standing at a towering height of four stories, another spanning 280 feet (85 meters). A curated segment of the video plays once every eight minutes in between a series of scheduled ads.

Opening on January 11, 2018, the installation launches a series of video art projects organized by the Art Production Fund, a non-profit public art organization, in partnership with Westfield World Trade Center.

“Art Production Fund is thrilled to present video art on such a highly visible, multi-screen platform,” said Casey Fremont, Executive Director. “We are grateful for the opportunity to partner with Westfield on this high impact, thoughtful collaboration at a location that represents the diverse community of New York City.”

“It’s fun!” Minter exclaimed after seeing the video projected in its largest-ever scale. She hopes that the innumerable commuters and tourists who circulate the space experience “a little glimmer of startlement” at an artwork interrupting the stream of advertisements. And given the video’s placement in a mall, the project is really quite fitting.