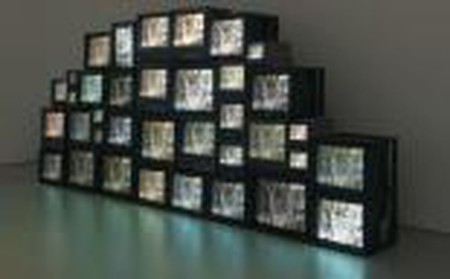 Finding it hard to cope with dyslexia as a child, Canadian-born artist Marcel Dzama found comfort through artistic expression, creating a number of skilled drawings during his time at school. From these humble beginnings to his current status as an internationally acclaimed artist with a list of high-profile clients, we discover Marcel Dzama’s story – from an unassuming sketcher to a worldwide phenomenon. 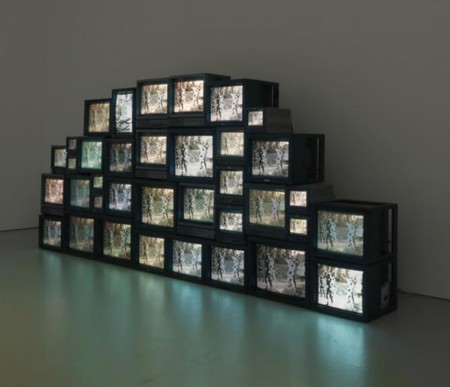 After finishing high school, Dzama attended the University of Manitoba where he founded the Royal Art Lodge in his senior year. The lodge was a closely guarded artistic society which one member described as, ‘a mysterious yet socially OK’d therapy group for mildly socially dysfunctional, highly imaginative people who liked to draw.’

After graduating from the University of Manitoba with a B.F.A in 1997, Dzama threw himself into the Los Angeles art scene. His talent was soon verified when familiar household names – including Jim Carrey, Brad Pitt, and Nicholas Cage – began to purchase his artwork. Today Dzama is no stranger to establishing exhibitions across Europe, Canada, and the United States. His work can be seen in many public collections across the globe – including the Tate Gallery in London and the Museum of Modern Art in New York. Dzama is currently represented by contemporary art dealer, David Zwirner, in both New York and London. He lives in Brooklyn with his wife and child. 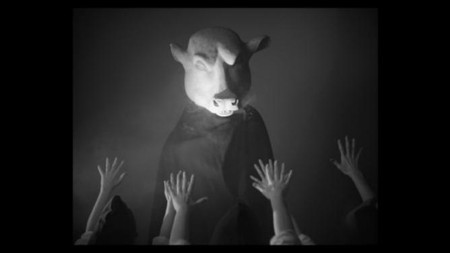 While Dzama is predominantly known for his pen-and-ink drawings and watercolour paintings, he also frequently works with sculpture, diorama, painting, collage and film – proving that an artist need not forsake familiar mediums to produce a fresh, contemporary style. Dzama has been surprisingly resistant towards digital art, claiming that he has never experienced – and never expects to experience – a harmonious relationship with technology. Despite this, his work remains perpetually fashionable – having been featured on album covers for They Might Be Giants, Beck, and The Weakerthans. Dzama even designed the costumes for Bob Dylan’s ‘When the Deal Goes Down’ music video.

Dzama’s style is nothing if not distinct. Known for his palette of earthy red and brown, his work is often surreal and ethereal, containing a fascinating blend of the supernatural with the familiar. While his artwork is often seen as reminiscent of old children’s books, a closer look reveals a dark depiction of well-known figures, often seen engaging in sexual or brutally violent activities. 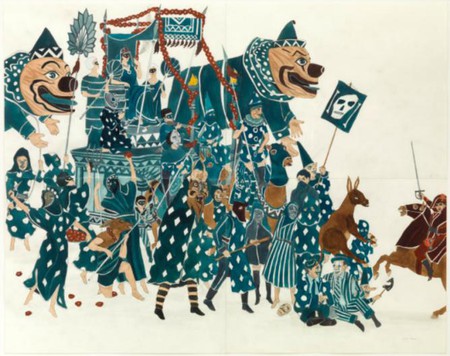 Scenes of bestiality, male and female amputees, bizarre versions of Batman and Robin, anthropomorphic wildlife, Winston Churchill surrounded by nude women, and even a sinister portrait of one of Snow White’s seven dwarves are found in the unique artwork of Marcel Dzama. This style not only makes Dzama’s work instantly recognizable, but is also a continual source of controversy.

The contentious nature of Dzama’s artwork by no means stems only from his choice of imagery, which masks fraught political and historical subtext. Dzama’s inspirations are as broad and diverse as his artistic style, ranging from Inuit art, Bosch, and Goya to comic-books, cartoons, and images from the Iraqi conflict. Dzama has artistically reproduced men in Soviet or khaki uniforms – reminiscent of the soldiers in the Great Wars – militants in threatening balaclavas aiming their weapons at a drone, and a depiction of solitary man hiding in an underground bunker, thought by some to be Saddam Hussein. This juxtaposition of long-standing political issues and current affairs with raw artistic ability is what separates Dzama from the crowd. 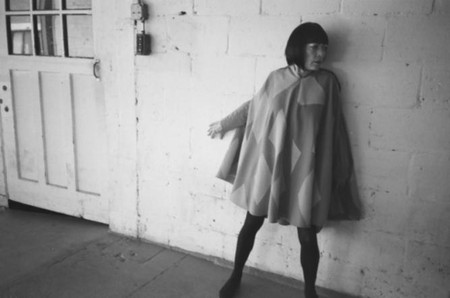 His work ‘Circle of Infidels (The 6th Revolution)’ depicts a group of indistinguishable women wearing balaclavas, brandishing Kalashnikovs, and waving a black flag dominated by a skull. Yet amidst this threatening scene, Dzama still manages to capture an element of their femininity and elegance, emphasizing their shapely legs in order to create a mesmerizing pattern evoking ballerina-like figures.

The controversial element of his work is certainly not lost on Dzama himself, who says he often finds himself thinking, ‘Oh that’s nasty! But I’ll go with it.’ This refusal to censor himself comes from a steadfast commitment to his artistic imagination, a conviction that ensures his work remains recognizable, memorable, and poignant. 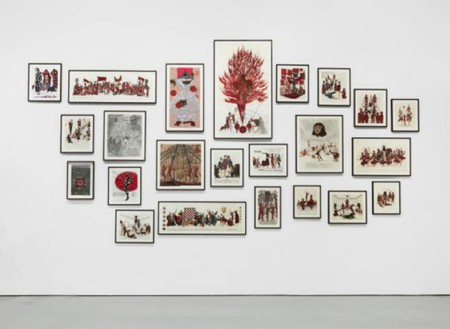 Understanding that his art can be disarmingly abstract to his audience, Dzama has claimed, ‘I actually prefer when they get it wrong. I like to hear their version of what it’s about.’ This suggests that Dzama takes the artist’s job of stimulating thought and discussion very seriously. Yet, even with the often shocking imagery that he employs, Dzama finds a way to imbue his work with a dream-like aesthetic, making his pieces highly sought after in the art world.