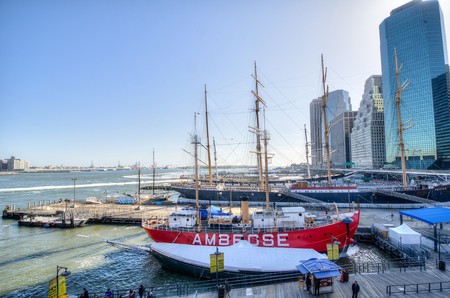 New York City’s South Street Seaport is as busy as during its heyday in the nineteenth and early twentieth centuries. Of course, contemporary merchants and their goods are no longer at the mercy of the sea, and gentrification continues to transform the Hudson Waterfront into prime real estate. Yet nestled between construction sites is the South Street Seaport Museum, a stalwart link to NYC’s past, present, and future.

The 50-year-old museum is located on Schermerhorn Row, one of Manhattan’s oldest neighborhoods. Since 1811—12, South Street has weathered advances in technology, commerce, and transportation; the socioeconomic shift from manual to office labor; local and state bureaucratic (dis)interest; the failed reboot of Fulton Mall (another reincarnation is in progress); the building and destruction of The World Trade Center, and Hurricane Sandy. Rather than overemphasize the obvious, the museum allows visitors to observe—and imagine—what life was like.

Conrad’s testimonial to seafaring is inscribed on the museum’s first floor. Unlike The Metropolitan Museum of Art‘s Turners and The New York Society Library’s association with Herman Melville, South Street Seaport Museum’s sees the relationship between art and the sea as hands-on. Their mission is defined in a postcard at the Admissions Desk describing “all kinds of artifacts that tell the story of New York City and more…a global trade port that changed the world.” It further encourages guests to text the museum describing what they collect and the “stories these objects tell”—recognizing that history is both public and private.

Exhibits in the main building are a tease to go beyond their walls and return again. The Original Gus Wagner: The Maritime Roots of Modern Tattoo provides a look at the career of Augustus “Gus” Wagner (1872—1941), an American merchant seaman turned tattooist and professional tattoo man (he had almost 300 himself). While there is no on-site tattooing, Wagner’s instruments are on display, as is a video demonstrating how he applied tattoos by hand; a technique he felt was less painful than machine.

Another video shows leaves (pages) from Wagner’s “Flash Book” of tattoo designs. Clients would chose patriotic themes, real or mythological animals, or portraits of beautiful women from around the world. The intricate patterns are fascinating, but so is the video itself, showing the unseen archivist’s gloved hands opening the acid-free folder and revealing its colorful content.

Donations are currently being collected towards restoration of Souvenirs of the Travels and Experiences of the Original Gus Wagner, his 150-page scrapbook. 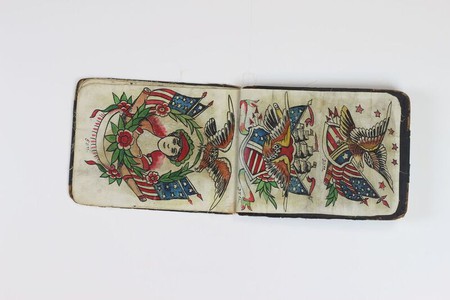 On the first floor of the museum is signage and video regarding restoration of Wavertree, an old cargo ship. One of her lifeboats and her bell (inscribed with her original name Southgate) are also there. The ship itself is docked on Pier 16.

The Circle Line, which shares Pier 16 with South Street Museum, is the louder “must-see” attraction. Circumnavigating Manhattan on a perfect day or night is nice, but boarding decommissioned vessels is living history. Besides, a bonus is that the museum keeps tours small because of cramped spaces. Be sure to wear comfortable shoes to maneuver gangplanks and ladders.

Built in Liverpool in 1885, Wavertree is one of the last remaining 19th century full-rigged (a vessel with three masts or more) iron-hulled sailing ships. She was a cargo “tramp ship” for hire. In 1910, Wavertree was damaged in a storm off Cape Horn and refitted in South America as a floating warehouse. South Street Museum acquired her in 1968, with major restorations beginning in 2015. Restoration volunteers on board are eager to discuss their work.

The original anchors rest on the top deck. There is also a engine marked “GM”. Researchers determined that it was installed in the 1940s—and that this particular General Motors engine is one of only a handful left.

Though the captain’s saloon could fit a piano, life on board Wavertree was hard. The 20-member crew’s cramped quarters shared a wall with the galley kitchen (currently removed for restoration), the warmest spot on ship. Ship entries mention disruptive behavior, no doubt caused by years of duty and the threat of death by frostbite. 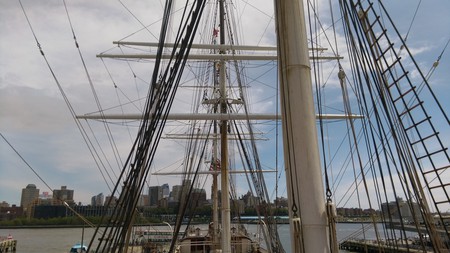 Docked on the opposite side of the Wavertree on Pier 16 is the Ambrose. Also known as Lightship LV-87, she was built in Camden, NJ in 1907, decommissioned by the Coast Guard in 1965, and acquired by South Street Museum in 1968. Tours are provided in the spring and summer with good reason: Ambrose lists (tilts) a lot. 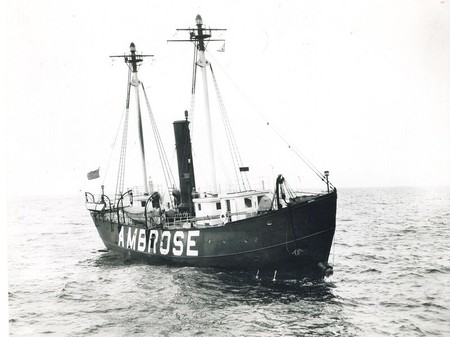 Ambrose was a lightship, or floating lighthouse, providing navigation and guidance to vessels entering New York Harbor. Though not a romantic image, immigrants saw the bright lights beaming from lightships before they saw the Statue of Liberty’s torch.

Unlike Wavertree, Ambrose was never damaged and duty was a somewhat cushy assignment. The 12—14 member crew slept in bunks instead of hammocks, with frequent shift rotations ensuring alertness. Television and radio was available. Radio provided more than entertainment; in 1921, Ambrose was the first lightship fitted with a radio shack. 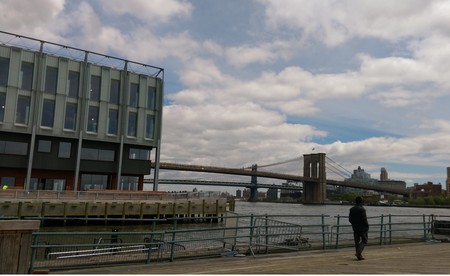