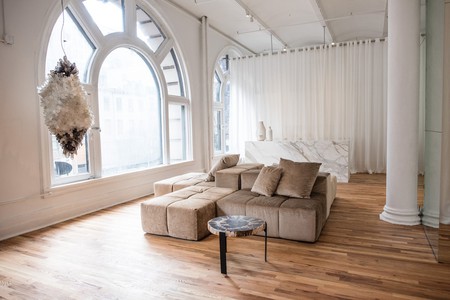 This spring, a new yoga studio called Humming Puppy opened in the Flatiron district. Its point of differentiation in a location that’s fast becoming the city’s boutique fitness epicenter is that it’s a studio that reverberates with the meditative hum of Himalayan singing bowls.

The studio at Humming Puppy is large and dark with a tiered wooden floor—a design that ensures the entire room has a clear view of the teacher. The only sound, besides her instructions and the unison of inhales and exhales, is the resonance of a Himalayan singing bowl. Its deep hum vibrates through the floor and into your body.

While many studios own at least one crystal singing bowl for sound baths and, perhaps, a once-in-a-while extravagant savasana, Humming Puppy utilizes it not only as a melodic backdrop to each practice, but as its “special sauce.”

“We went on this whole journey of sound exploration to figure out which frequency would be the best in a yoga class,” explains Jackie Alexander, who co-founded the studio with her fiancé, Chris Koch. “We saw different specialists throughout the world to figure out what the best frequency would be, and we were told gamma brainwave wave frequency, which is 40 Hz, because it will put you into a really focused state of mind.” 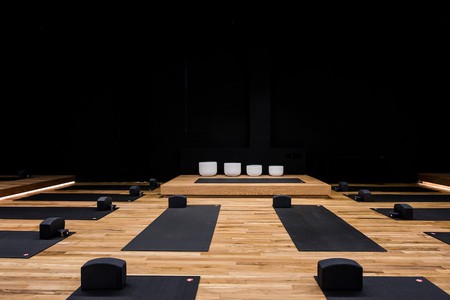 Studies have shown that Buddhist monks and other avid meditators switch to gamma brain waves during their practice, which is perhaps why these oscillations have a reputation for improved cognition and inducing a sense of calm focus.

Humming Puppy also imperceptibly vibrates at 7.83 Hz—the frequency of the earth, which is intended to bring a sense of grounding to the space. Through a process known as “entrainment,” Alexander and Koch hope the bodies of the students may become positively and physically attuned to the hum of the studio. “The more that you are immersed in a particular frequency, the easier it is to tap into that frequency,” Alexander explains.

Before opening in Flatiron, the couple tested the concept in their home city of Melbourne. Despite joining a throng of competition in Prahran—the most densely-populated neighborhood for yoga in the world, with 30 studios across a 2.5 mile (4 km) radius—Humming Puppy flourished. Next came a Sydney studio, and this April, New York—a long-time dream for them both. 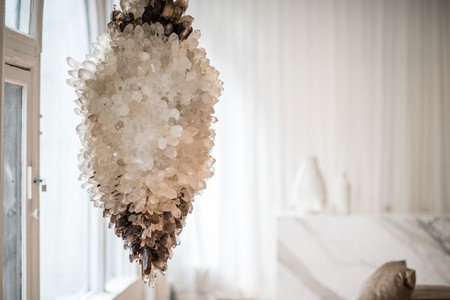 Humming Puppy (named for the hum and the pose “downward-facing dog”) is strikingly beautiful, too. Natural light floods through giant arched windows into the reception/lounge area. A giant crystal lamp created by Aussie lighting designer Christopher Boots makes for a distinctly Instagramable element among the neutral palette of the décor.

Everything from coconut water and yoga mats to grooming products and tools is provided, so students can drop in for class without hauling all their stuff to and fro. It’s those small details—the things that make your day lighter and a little more easeful—which make this Aussie newcomer an immediate standout among the New York yoga scene.