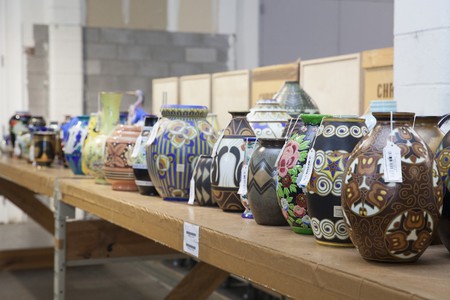 On an unassuming street between the Long Island City and Sunnyside neighborhoods of Queens, an unmarked warehouse once used to construct a Cold War-era ballistic missile stores fine art masterpieces and quirky antiques slated for the auction block at Christie’s New York. Ahead of Christie’s August 2018 Interiors sale, Culture Trip toured the Redstone warehouse for a sneak peek at the designs coming to auction.

Over 400 items comprise Christie’s August Interiors sale, which primarily features the collection of New York interior designer, Tom Britt. Britt furnished his Upper East Side and Hamptons homes with the same theatrical flair afforded to his clients. Come August 22 2018, the eclectic pieces that he acquired and designed – in addition to various articles from other private collections – are for sale in a two-part auction dedicated to home décor. 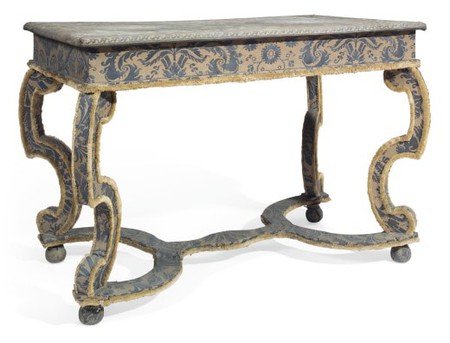 From August 17–22, the public may peruse vignettes composed of Britt’s furniture and home accents at Christie’s showrooms in Rockefeller Center. Each scene is meticulously curated by Christie’s specialists, an in-house interior designer, as well as guest “tastemakers” Sarah Bray from Modern Luxury and interior decorator Anne Spilman. But before the pristine arrangement of these objects within Christie’s Midtown galleries, all 400-odd lots made their way to Redstone, a two-story warehouse located in Long Island City, Queens. 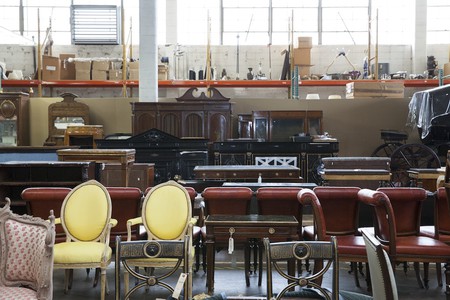 Christie’s has maintained a pre- and post-sale storage presence in Long Island City since the 1980s, with two initial warehouse spaces that were eventually consolidated into one. Named after the Redstone Rocket, an intercontinental ballistic missile that was assembled and subsequently housed within the space in the Cold War era, the Redstone facility has since been repurposed to store fine art and decorative treasures before and after Christie’s New York auctions. 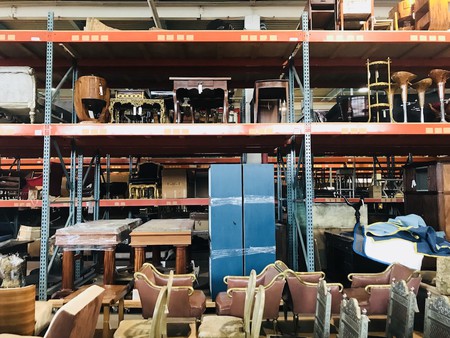 In the weeks before the Interiors sale, Redstone is packed to the rafters with antiques grouped according to item type: mirrors, rugs, dinner services, light fixtures, vases and more. All manners of chairs, lounges and coffee tables line towering shelves and spill out in rows before a succession of horse-drawn carriages – left over from the record-breaking sale of Peggy and David Rockefeller’s estate – awaiting shipping to winning bidders. Specialists on hand remind guests that this isn’t a museum – you can handle pretty much anything with care to establish a stronger connection with the texture, weight and history of each lot. 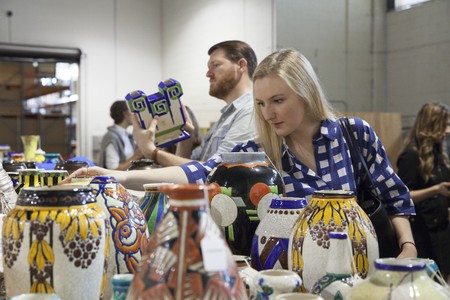 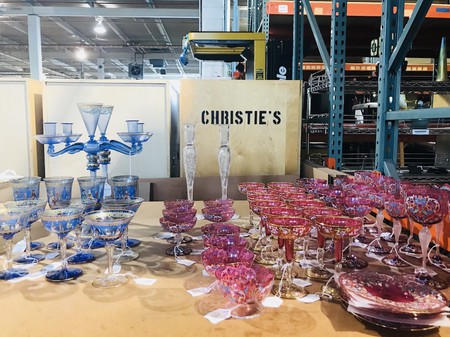 “Christie’s focuses on small collections and different groups – Chinese, 20th-century, glass, Tiffany, European furniture – that will attract people’s attention and that we think are relevant,” Summers says. Other highlights of the sale include a silvered wood and reverse-painted glass overmantel mirror, a rare “Talosel” and mirrored convex mirror by the French designer Line Vautrin, an Indian mother-of-pearl inlaid and red-painted side cabinet and a French red leather-veneered four poster bed. 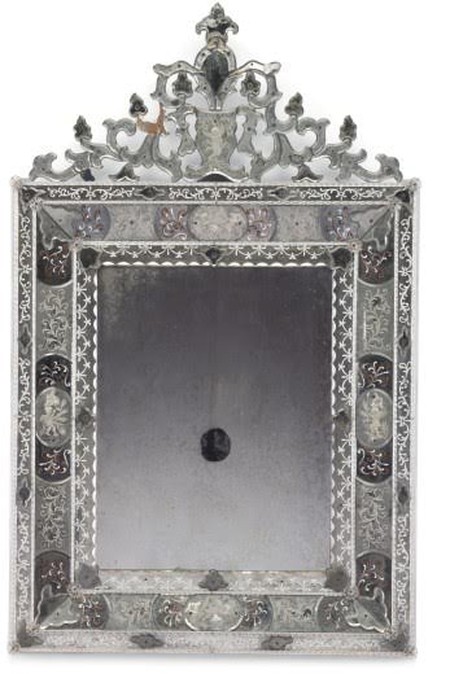 “The idea is that you get a mix, a chance to see things side by side that may not have originally been put together,” says Victoria Tudor, Associate Specialist of Interiors. “There’s an opportunity to have an imagination.” The vignettes on view at Christie’s New York showcase Tudor’s sentiment by juxtaposing furniture, antiques and decorative elements from various geographical locations, time periods, styles and collections. 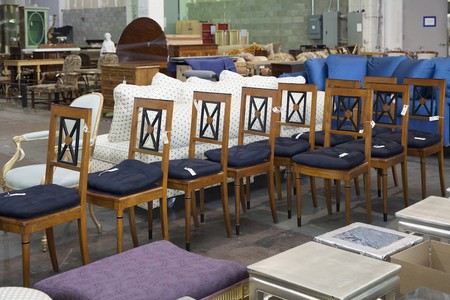 Varying styles of furniture are grouped together on the Redstone floor | © Christie's Images Ltd. 2018.

With estimated price points spanning USD$600 on the low end to USD$50,000 on the high end, interested parties with broad-spectrum budgets can bid. Furthermore, Summers explains, “A number of pieces in the sale are no reserve, which basically means the client doesn’t want it back. This is something that buyers appreciate because they’re not competing against the confidential reserve agreement between auction houses and the seller.”

Christie’s Interiors sale will take place in two parts on August 22. The public is invited to preview the August Interiors sale at Christie’s showroom in Rockefeller Center from August 17–22 and attend a free “Lates” event on August 20 from 6pm-8pm. Please note that Christie’s Redstone warehouse is not currently open to the public.