In Queens, an Ice Cream Parlor’s Timeless Ode to Nostalgia 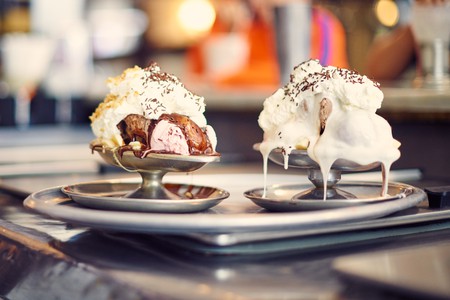 Eddie’s Sweet Shop, an old-fashioned ice cream parlor that’s been stationed in Queens for a hundred years, sees no reason to change a winning formula.

A stroll by Eddie’s Sweet Shop in Forest Hills, Queens, will make you stop and stare. Perched on the corner of a sleepy street, the old-fashioned ice cream shop is reminiscent of a time when soda shops – businesses similar to ice cream parlors – were hip gathering spots, places where consuming sky-high sundaes speckled with rainbow sprinkles was the norm. Even a hundred years later, stepping inside feels like a brief jaunt to the past: a neon “SODA” sign hangs out front, wobbly stools are perched in front of a counter, and house-made ice cream is scooped into silver tin dishes. 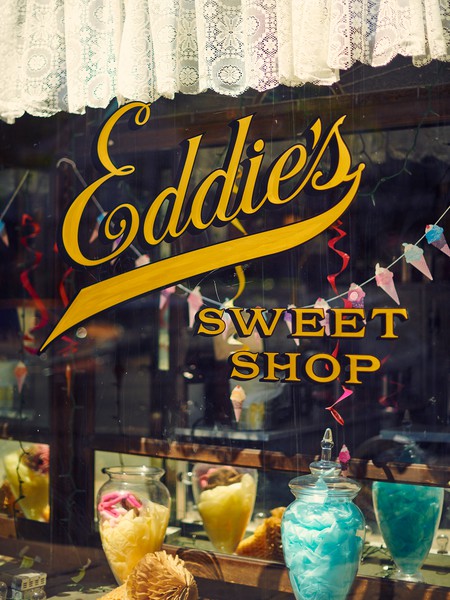 In today’s world, the quality of a product – whether a culinary one like ice cream or not – isn’t necessarily deemed as important as its Instagrammability. At Eddie’s Sweet Shop, however, the colorful, soaring sundaes are not only visually appealing; they’re actually delicious.

Lest you think the current owners of the store, Angelina and Vito Citrano, intentionally created a viral-worthy business, think again: this has been standard local fare since the ’60s. Angelina does acknowledge the couple’s interest in similar shops (“Whenever we go away, we love to check out other places,” she admits) but makes it a point to note that they are “not snoopers” and would rather concentrate on carrying on the store’s legacy by offering their own unique product. 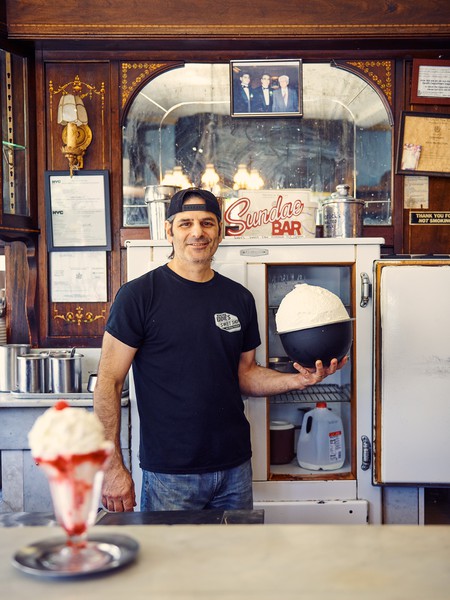 Angelina and Vito have been running the business for several years now. The shop was originally purchased by Vito’s family half a century ago, and he worked there as a teenager before taking over the business from his father.

Nowadays, not much has changed. Some things have been modernized: the store welcomes class trips to educate students on the history of the shop and how to make ice cream (a result of Angelina’s former job as a schoolteacher); hosts private parties; and prepares made-to-order cakes. But for the most part, Eddie’s Sweet Shop still exudes the humble charm of a timeless soda shop. 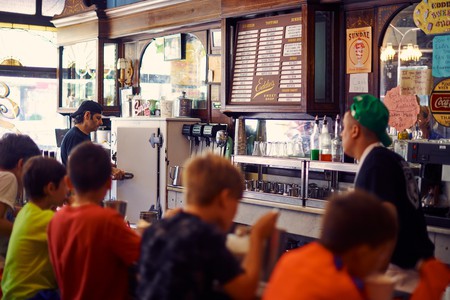 The inside is a transportive experience, decked out with colorful syrups, wobbly stools and silver tins overflowing with ice cream | © Louise Palmberg / Culture Trip

Take the decor, for example. Anchored by a refrigerator made by Frigidaire in the ’80s and silver cups crowned with scoops of ice cream, Eddie’s Sweet Shop has crafted the semblance of a destination reachable only by time machine. When is the last time you went to an ice cream parlor with table service?

Questions inevitably arise when you walk into the shop: Does the ice cream hold up? Although the movie-like experience (the destination appeared in Isn’t It Romantic? starring Rebel Wilson, Remember Me with Pierce Brosnan and Robert Pattinson, and countless other TV shows and films) is surely a memorable one, are the ice cream sundaes and sodas actually good, or are we merely dealing with another social media gimmick, like so many other exhibits and pop-ups that have recently taken over New York? 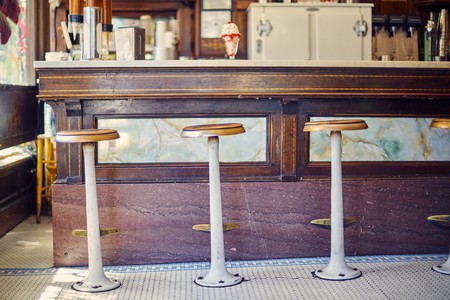 The space shows its old legs, but no matter: you’re here for the whipped-cream-adorned sundaes, after all | © Louise Palmberg / Culture Trip

Turns out, Eddie’s is the real deal: the house-made ice cream is prepared by Vito himself in the downstairs “ice cream lab.” Scoopers behind the counter dig into tubs of the stuff, dishing out hearty scoops of “basic American ice cream, not gelato,” as defined by Angelina. Gusts of whipped cream are plopped onto scoops and drizzled with rich chocolate fudge.

But there is another part of the story, one that helps explain the unvarnished success Eddie’s Sweet Shop has enjoyed for so long: nostalgia. Although restaurants, bars and cafés all over the world have tried to adapt to the technological and social changes that have affected all industries, Eddie’s Sweet Shop has remained virtually the same since its inception. Here, you won’t find attempts at culinary-trend development or built-for-Instagram offerings. The space harks back to an earlier, easier time and plays on a past-life feeling that even in 2019 trumps the comforts of technology. In a way, this vintage ice cream parlor has kept up with the times by doing nothing at all. 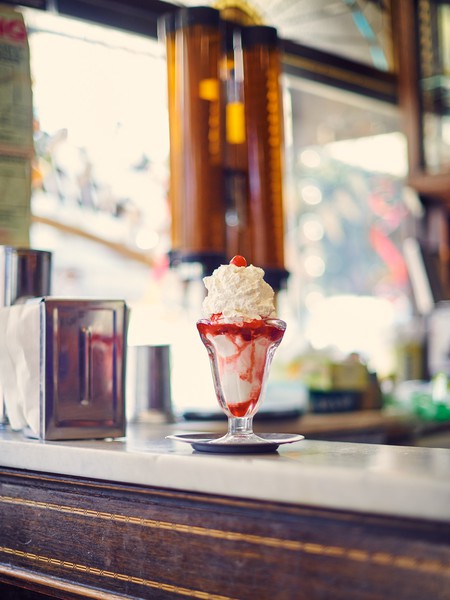 Given the owners’ dedication to all things natural, the ice cream’s high quality shouldn’t come as a surprise: there are no egg-based flavors here, and all the ingredients are natural. The ice cream is made daily during the summer, the whipped cream is hand-whipped into cloud-like puffs multiple times per day, and the caramel and fudge are both home-made. The only foods that aren’t prepared in the store are some of the fruit and chocolate syrups. 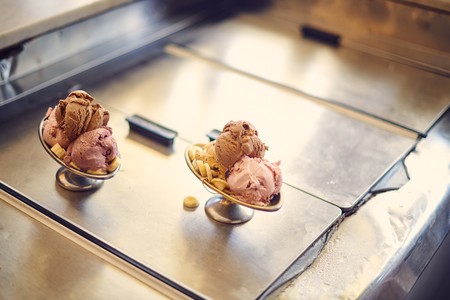 As for the most popular flavors, vanilla, chocolate and strawberry reign supreme, but the likes of butter pecan, coffee, pistachio, blueberry and peach (the latter two made only in the summer, given ingredient availability) enjoy a pretty large fan base as well.

Angelina’s favorite is the cherry vanilla, churned with fresh cherries. “Nothing is made with maraschino cherries here,” she says. “Those are only added at the top of sundaes.” 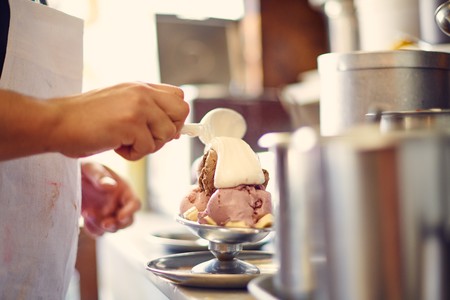 Far from being just a matter of business, Angelina’s loyalty and passion for all things Eddie’s is pure, a fact made apparent when she recalls her very first trip to the parlor. Now married for 23 years, Angelina and Vito had their first date over a sundae at Eddie’s Sweet Shop some 30 years ago. Not aware of Vito’s connection to the store, Angelina devoured a raspberry ice cream with marshmallow and whipped cream, a sundae she remembers fondly today. When Giuseppe, her future father-in-law and the former shop owner, approached her to say hello and reveal his identity, she was flabbergasted. Could the raspberry sundae have sparked her love for both Eddie’s and Vito, the man behind the ice cream?

“I ended up marrying the guy!” she says, laughing. 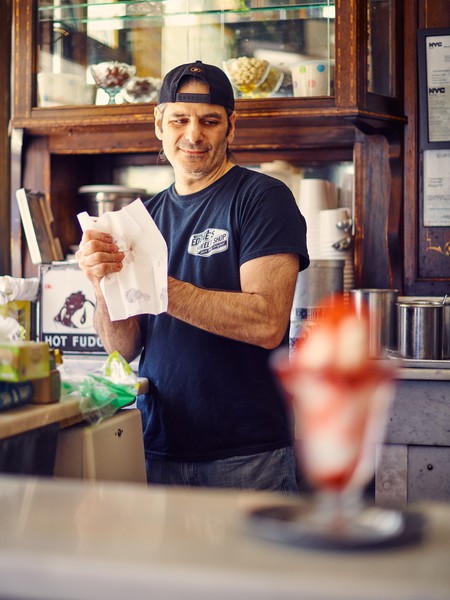