In NYC, the Illegal Ivory Trade is Closer than You Think 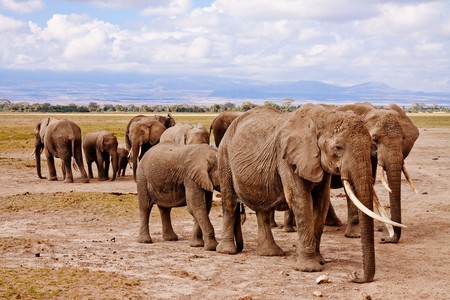 Kenya elephants | © Poswiecie
In association with

In the low risk, high reward game of ivory, African rangers and conversationalists are fighting against traffickers and poachers to save the world’s dwindling elephant population. While far removed, 7,350 miles (11,829 km) away in New York City, illegal ivory is finding its way into high end shops.

[dropcap]E[/dropcap]vening in Kenya and the protected lands of Tsavo National Park are quiet albeit the low rustle of leaves. The current serenity is misleading as the park—like so many wildlife reserves in Africa—is the stage of an omnipresent battle between elephant conservation and the illegal ivory trade. The evening silence is broken by poachers donning automatic rifles and chainsaws; they are hunting ivory and in March 2017 they find it with Satao II, one of the continent’s oldest elephants. 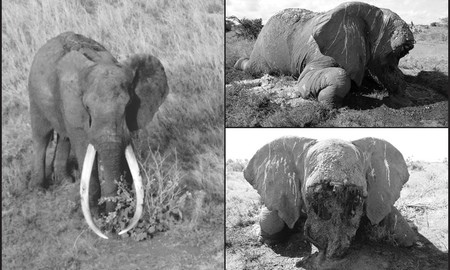 The poaching of elephants in Africa—where an estimated 100 pachyderms are killed each day—seems far removed from New York City. The haunting images of Satao’s carcass may inspire a pang of sadness, may even illicit a donation from New Yorkers, whose closest elephants are found at the Bronx Zoo. Yet, the tentacles of the ivory trade—and illegal wildlife trafficking in general—reach far across the Atlantic Ocean with poached ivory being sold in plain view on Madison Avenue.

This month, in an effort to send a message to ivory traffickers, the New York State Department of Environmental Conservation (DEC), destroyed more than a ton of illegal ivory estimated to have a street value of $8 to $10 million USD. The event—appropriately called the Ivory Crush—represented three years of undercover investigations to identify illegal ivory smugglers and sellers in NYC.

“By crushing a ton of ivory in the middle of the world’s most famous public park, New Yorkers are sending a message to poachers, traffickers and dealers who try to set up shop right here on our streets: We won’t stand for the slaughter of elephants. Nobody needs an ivory brooch that badly,” said John Calvelli, Executive Vice President of Public Affairs of the Wildlife Conservation Society and Director of the 96 Elephants Campaign. 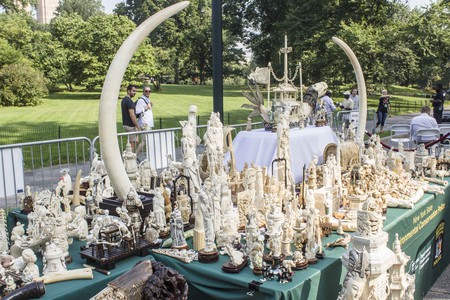 New York was one of the top three US markets for ivory, alongside San Francisco and Los Angeles. According to a report from TRAFFIC, in a 2006-2007 study more than 16,758 illegal ivory items were found being sold in retailers across the three cities. In 2016, a study revealed that only 489 ivory items were found across key markets, signaling an optimistic decline in the commercial sale of elephant ivory.

Back in 2014, New York Governor Andrew Cuomo signed a law to combat the ivory trade by strengthening punishment against buyers and sellers. According to the law, the ban specifically prohibits the sale and purchase of elephant ivory and rhinoceros horns in New York state, with the limited exception to antique products proven to be 100 years old and containing trace amounts of ivory. In other words, the law dealt a huge blow to ivory traders looking to profit off of the New York market. 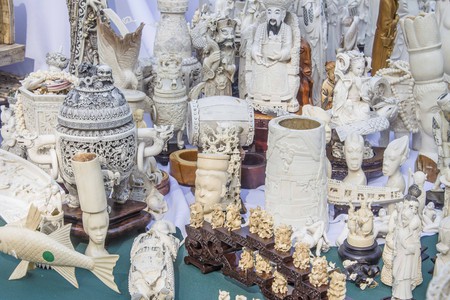 Despite loftier punishments for those involved in the ivory trade, Calvelli reveals that ivory is still finding its way onto NYC’s streets. “Two sellers busted in 2015 on 57th St. in Midtown Manhattan with $4.5 million worth of ivory items were convicted just last week by District Attorney Vance and ordered to pay hundreds of thousands of dollars in penalties. Those confiscated ivory items will be among those crushed in Central Park.”

Major Scott Florence, a top investigator of the DEC, explains that in order to sell ivory in NYC a person must first obtain a permit from his department proving, in line with Cuomo’s 2014 ban, the ivory is more than a hundred years old. New York does not control the import or export of animal products and so focuses efforts on monitoring the market and identifying sellers without permits. While there has been a decline in ivory sales, the product is still finding its way into high end boutiques.

“There is a lot of symbolic meaning behind [the Ivory Crush event],” explains Major Florence. “Symbolically we‘re crushing the ivory to show countries where elephants exist that we’re with them. Practically we’re destroying [the ivory] so it can never go back on the market.” 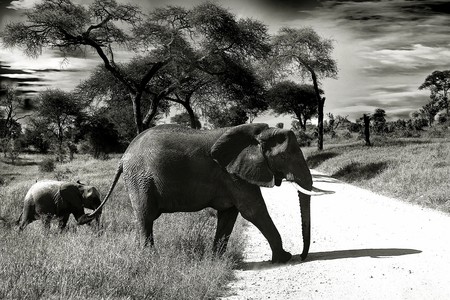 While the ivory trade threatens to rob the planet of one of the most iconic animals, it also poses a threat to global security by fueling criminal activity, says Deputy Assistant Secretary Daniel Foote representing the US Department of State. Wildlife trafficking fuels corruption and instability by strengthening violent criminal organizations, this is a problem that reaches far beyond Africa, the proceeds from illegal ivory (and other wildlife trafficking) ultimately end up funding drug trade and terrorism networks.

On the morning of the Central Park Ivory Crush, protestors, journalists and state representatives alike gathered beneath a canopy of trees to witness two tons of ivory being destroyed. A table sat heavy with ornate trinkets—everything from detailed centerpieces to intricately carved tusks—that reflected the sunlight. With its expert craftsmanship, the ivory on display looked so beautiful that one could almost forget the sinister journey it took to get here. Almost. 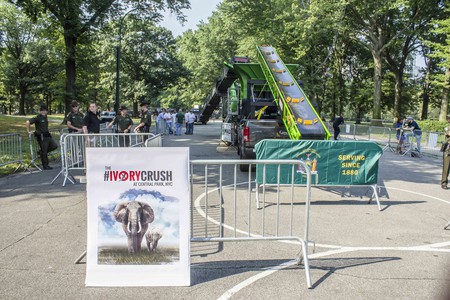 “I don’t see this as art,” says Basil Seggos, the commissioner of the New York State DEC.

One by one, people began loading each ivory item onto a conveyor belt where it was then audibly crushed, emitting a faint cloud of white smoke into the air. The emotion was one of ambivalence—palpable triumph from this symbolic occasion and sadness for the unnecessary loss of life and human greed.

It is the journey this ivory made that is the hardest to swallow. The ivory crushed at Central Park was once on an elephant, roaming freely in the African savannah, before being cruelly ripped away from the animal’s body, smuggled into other countries and eventually being sold to wealthy New Yorkers. 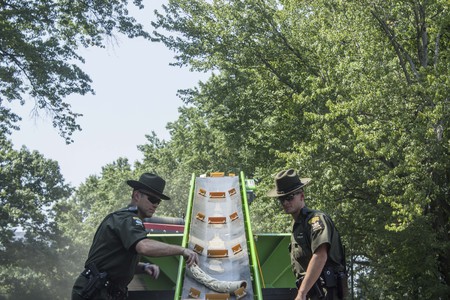 How many rangers had to die in an effort to protect the 100 elephants that were killed for this bounty? How many communities were torn apart in the process? How much profit was given to criminals who continue to plague society today?

As the crusher whirred to life, gobbling up whole tusks, it was clear that this was but one win in a much larger war that extends far beyond Africa and into New York City.