If You Have Gripes about New York City's Bus Services, You Should Read This Book 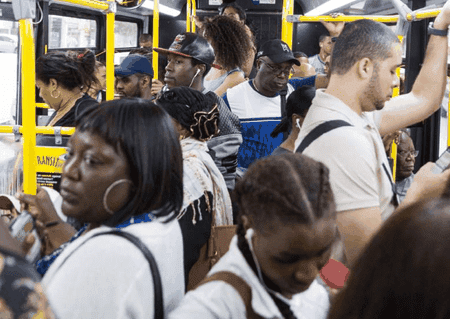 From the cover of 'The Woes on the Bus' | © Rider's Alliance

Why two transit activist groups teamed up to co-publish an anecdotal book on transit distress.

“The B25 is the worst bus in New York. It’s always crowded and late and I can never find a seat. Sometimes a bunch of B25 buses will come at once after I’ve been waiting for over half an hour.”

All New Yorkers who take public transit can probably identify with this kind of complaint. New York City’s Metro Transit Authority, commonly referred to by its initials, receives comments such as the one above pretty often*, which may be why the NYC Riders Alliance, a grassroots organization that works to improve the city’s public transit, teamed up with a fellow group, the Bus Turnaround Coalition which rates NYC’s many busses, to produce a book of passenger jeremiads.

The newly published and cheekily titled Woes on the Bus: Frustration and Suffering All Through the Town gathers nearly 50 anecdotes a commuter frustrations from over a thousand submissions to tell riders’s diabtribes, whether they be waiting for hours in the rain, being pushed and shoved due to overcrowding, being late for job interviews and doctors appointments, and a host of other laments. While New Yorkers will be empathetic to many of these philippics, a few stick out such as the elderly woman threatened with a fist for not closing her walker, or the woman who missed an audition to be a back up vocalist for John Legend, or the woman who waited three hours for a bus journey that would have taken 15 minutes by foot.

“We will share these bus riders’ woes with MTA and New York City DOT leaders, with the Governor and the Mayor, with lawmakers and reporters, and with the transit-riding public,” states the Rider’s Alliance in their introduction. “By highlighting the reallife consequences of poor bus service as reported by bus riders in their own words, we hope to add urgency to the effort to win faster, more reliable buses —and to save New Yorkers time, money and aggravation, leading to a fairer and more inclusive city that works for everyone.”

Along with these stories, the book includes a list of proposals to improve MTA’s bus services and encourages readers to help initiate these ideas into reality by visiting the Bus Turnaround Coalition’s website. The book itself, is available for free as a PDF, and is worth a read, especially while waiting for the bus.

* The excerpt above is taken from the book.