How To Spend 5 Days in New York City 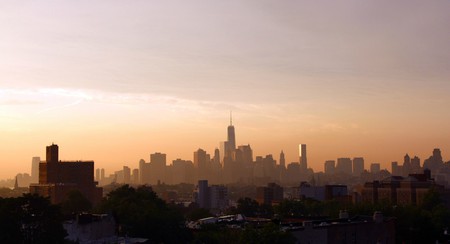 A five-day trip goes by quickly in NYC. With so much to do and see, it’s hard not to feel like no matter how much you accomplish, you’re still missing out on a world-class restaurant or a top-notch event. Culture Trip brings you a tailored itinerary to make the most of five days in New York City.

Fabiane’s is a little piece of France in the heart of Williamsburg. Choose from their many breakfast and brunch options; if you’re in the mood for something sweet to start off your day, go for the French toast with strawberries or the waffles. If you’re more of a savory breakfast type, try the organic eggs with smoked salmon, scallions, and potatoes. Almost every item on their menu has a gluten-free counterpart, so there’s something for everyone at this charming Brooklyn-based eatery.

Head on over to Manhattan for some quality shopping in one of the city’s most fashionable neighborhoods. SoHo has a surprisingly rich history, with many of its stunning buildings dating back hundreds of years, but it was also something of an unofficial artist colony back in the 1960s and was home to some of the most diverse and creative figures associated with NYC. Are you a film buff? You may recognize this neighborhood from major Hollywood blockbusters such as Hitch, Ghost, and Spiderman. As you stroll down SoHo’s charming cobblestone streets, be on the lookout for historical plaques or celebrity sightings.

For lunch, head to The Picnic Basket for memorable and delicious sandwiches. We highly recommend the French goat cheese sandwich with sundried tomato pesto, grilled zucchini, figs, tomatoes, and fresh greens if you’re in the market for something cold. Alternatively, you can opt for a hot-pressed sandwich such as the prosciutto di parma with mozzarella and sun-dried tomatoes or the turkey and herb sandwich with Swiss cheese and basil pesto. 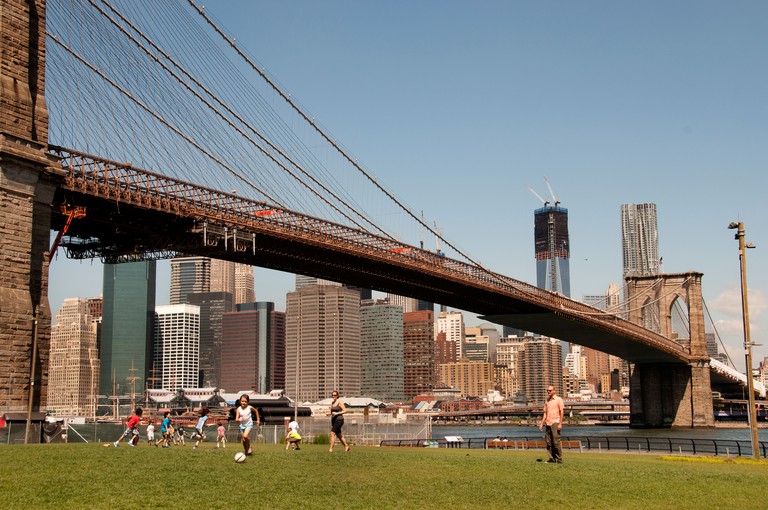 © Peter Horree / Alamy Stock Photo
It doesn’t matter which pier you venture out to in Brooklyn — the views of Manhattan will always be breathtaking. That being said, Pier 1 offers a one of the best views, and you can enjoy both the Manhattan skyline and the Brooklyn Bridge. Weather permitting, sit outside and take in your surroundings, explore neighboring piers to play beach volleyball, or visit the historic Jane’s Carousel in Brooklyn Bridge Park.

Breakfast for dinner? Yes please! Sweet Chick is Williamsburg’s go-to for chicken and waffles, and it is unsurprisingly popular amongst locals. If you’re going to eat here, we highly recommend going all out. Start off with the mac and cheese appetizer (a gooey mix of three cheeses topped with a Ritz cracker crunch) and then move on to the bacon-cheddar chicken and waffles. 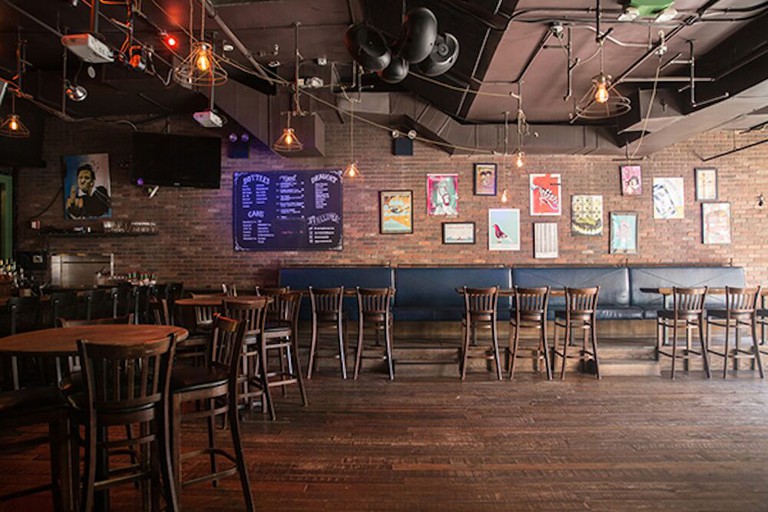 Knitting Factory's Front Room | Courtesy of Knitting Factory
The Knitting Factory is a great way to close out the night. Don’t let the name fool you — the Knitting Factory hosts great concerts featuring talented up-and-coming artists. This space hosts some sort of performance every night, so check their website beforehand to ensure that there’s still space. If you’re not a concert person, check out their comedy nights instead. You can buy tickets for most of these events at the door, but we suggest buying them beforehand online.

If you’ve ever watched an episode of Seinfeld or listened to Suzanne Vega’s 1980 hit ‘Tom’s Diner,’ you’re probably somewhat familiar with Tom’s Restaurant. A staple of the Upper West Side, Tom’s Restaurant has been around for almost 80 years. History lesson aside, their food is tasty, and more importantly, they serve breakfast all day (so it’s perfect for late risers). Opt for the pancakes or the French toast, or if you’re in the mood for something savory, try their bacon, egg, and cheese sandwich.

Park
Facebook
Email
Twitter
Pinterest
Copy link
Share
Map View
Time to burn off all that breakfast. Central Park is an absolute must-see when visiting New York, and while you certainly won’t be able to see it in its entirety in one afternoon, you can certainly catch some major points of interest. Rent a row boat by the Bethesda Fountain, explore ‘The Pool’ up by 100th street, or simply stroll and relax under some trees.
Book Now

Zoo
Facebook
Email
Twitter
Pinterest
Copy link
Share
Map View
For such a metropolitan area, New York City has a lot of zoos. You can stop off at the smaller-but-still-impressive Central Park Zoo while you’re there, but arguably the most famous and expansive zoo in New York City is the Bronx Zoo. General admission is free on Wednesdays, so aim for a mid-week visit, but either way, it’s worth the trip.
Book Now

For some of the greatest panini in the city, head over to Eataly. The bread is always fresh and is made in their in-store bakery, and you will be hard pressed to find a better variety of toppings. Not in the mood for a hot or cold sandwich? Explore the vast expanse that is Eataly for some savory meals. There are several restaurants throughout the store, so be sure to check out every last one.

Cinema, Theater, Movie Theater
Facebook
Email
Twitter
Pinterest
Copy link
Share
Map View
There’s no need to head out for dinner if you wish to end your evening with a visit to Nitehawk Cinema. This Brooklyn-based venue takes the ‘dinner and a movie’ concept to a whole new level, offering a menu that pairs with the film that’s playing. Nitehawk shows a great mix of recent and retro films, and if you don’t like the movie-themed menu when you visit, they offer other food options including steak sandwiches and crispy fish tacos.

You can’t fully experience NYC without its star attraction — the bagel. Although the multitude of choices may seem overwhelming, you should stop by Tompkins Square Bagels for a particularly fantastic bagel. With over a dozen cream cheeses to choose from, your bagel won’t be anything other than delicious. Try the bacon herb cream cheese on a poppy seed bagel, or go for fruit butter on a French toast bagel. 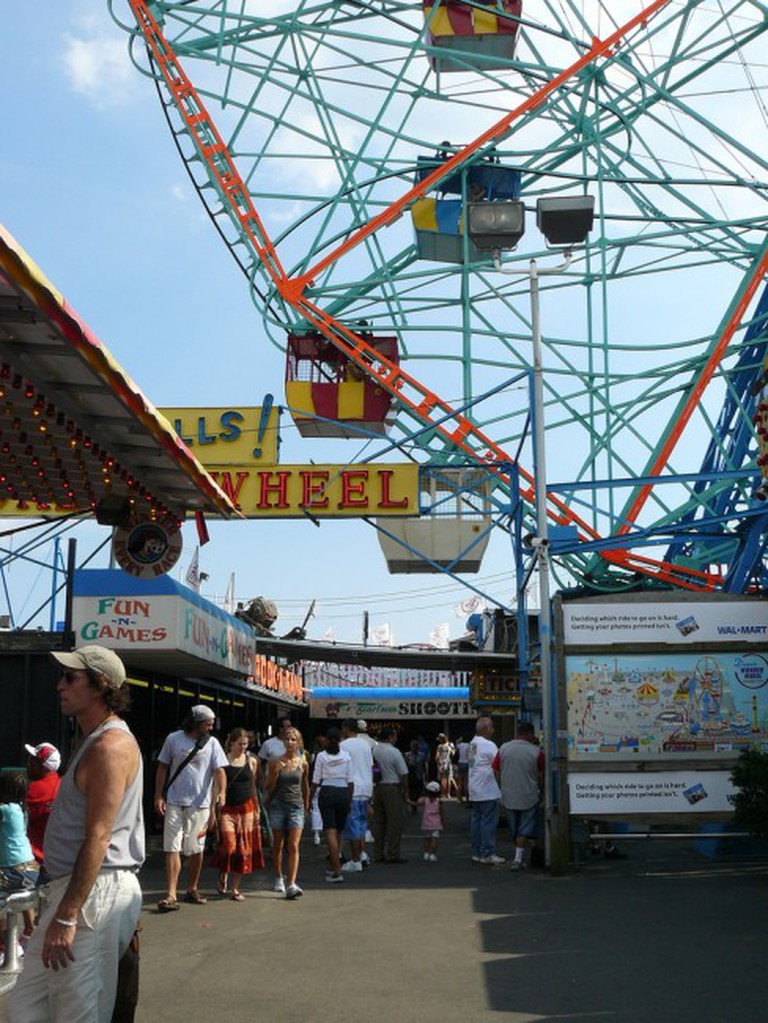 coney island | © kathia shieh/flickr
This Brooklyn icon has been around for over a century and is home to one of the largest amusement parks in the United States. After Hurricane Sandy, Coney Island suffered some heavy damage, but has since returned to its former splendor. It can be a bit of a trek depending where you’re staying in the city, but it’s worth it for a ride on the famous Cyclone and for a peek into old-world New York life.

Museum of the American Gangster

Carrying on with the theme of ‘old-world New York,’ head back to Manhattan and learn about the fascinating role of the American gangster in history. The Museum of the American Gangster consists of two rooms filled with great artifacts and is located just above a speakeasy. The street on which it’s located was once frequented by the likes of Al Capone, Lucky Luciano, and John Gotti.

Burger and Lobster - Harvey Nichols | © Ruth Johnston/flickr
After wandering around the nearby Chelsea and Meatpacking District neighborhoods, head to Burger and Lobster for a uniquely indulgent meal. For $20 you can get a lobster roll, or, if seafood isn’t your thing, try a burger. Burger and Lobster has forgone the traditional menu option for an easier tactic — spend less time choosing and more time eating and having fun with your dinner companions. Each dish comes with a side salad and fries, so you’re sure to leave fully satisfied.

Locanda Verde is a popular spot amongst locals. The décor is rustic Italian with an open kitchen plan, allowing customers to watch their food as it’s prepared. The breakfast crowd is quieter, but the lull between the breakfast and lunch rush is a prime time to grab a quick bite. The sheep’s milk ricotta with burnt orange and truffle honey on toast is a favorite amongst patrons, but if you’d like something slightly more traditional, we recommend the hazelnut-crusted French toast.

One of New York City’s most prized art institutions, the Guggenheim is one of many necessary stops on the Upper East Side’s Museum Mile. Aside from their unparalleled exhibitions, the building itself, designed by famed American architect Frank Lloyd Wright, is a sight to see. 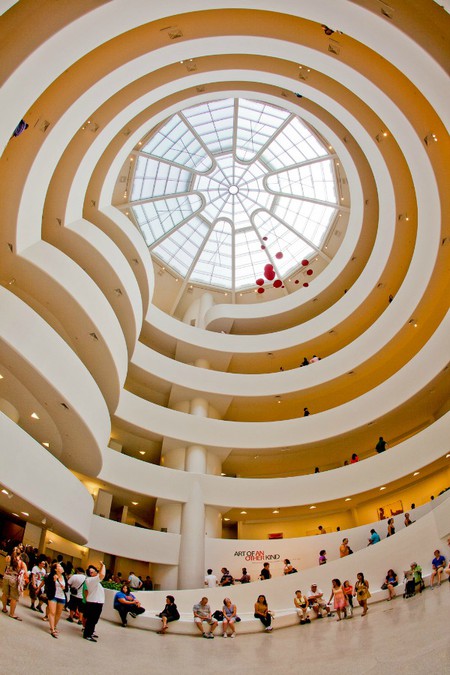 The Meatball Shop is a trendy restaurant that (unsurprisingly) offers some of the best meatballs in Manhattan and Brooklyn. Get the traditional meatball with tomato sauce and pasta, or if that’s too heavy, opt for the sliders. Save some room for dessert — their ice cream sandwiches are an NYC must-try, and are made with freshly-baked cookies. 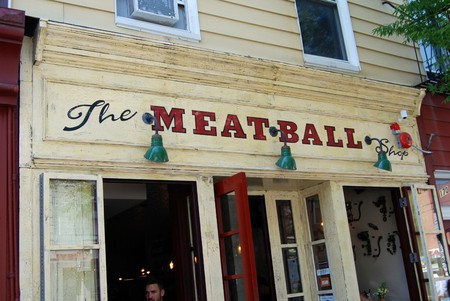 You can’t go to New York without seeing a Broadway show, and the range of shows will appeal to even the most cynical theatre-goers. Expect mesmerizing backdrops, catchy tunes, and stellar casts. Every theater is full of its own history and usually runs specific shows, so be sure to check them out on the Broadway website. Although dressing up is optional, we recommend that you make this a night on the town.

Gastropub, Restaurant, Dessert Shop, Greek
Facebook
Email
Twitter
Pinterest
Copy link
Share
Map View
NYC is a hub for eclectic culture and cuisine, so as long as you’re here, try something a little different. The Greek is a Greek tavern and gastropub with a rustic Mediterranean feel. Start off with the spread, which comes with a crispy, lightly-toasted bread, and then move on to the kota(a baked chicken with herbs and kefalograviera cheese). As for dessert, you can never go wrong with the sokolatopita. While The Greek is on the pricier side, this is one splurge that will leave you more than satisfied.

Hudson River Park Mini Golf | © Eden, Janine and Jim/flickr
There’s no better way to end your New York City excursion than by channeling your inner child. Grab some friends for a round of mini golf at Pier 25. This 18-hole miniature golf course has it all; a waterfall, a pond, little bridges, and sand traps. The one thing it holds over all other course is that it overlooks the Hudson River, which is a seriously breathtaking view. This is a pretty cheap way to have fun, as adult tickets are only $5, and the course opens for the season on April 18th, 2016.
Give us feedback