How to Build an Artificially Intelligent Bot in Under Two Hours 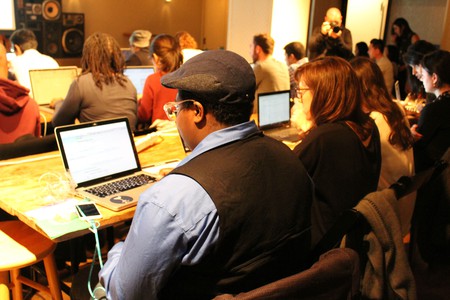 The cognitive coding class in New York | Courtesy of IBM

Artificial intelligence is everywhere. For many, that can seem daunting and scary. Ask the majority of people to build an AI bot and they probably wouldn’t know where to start. But IBM is aiming to make its AI system, Watson, as accessible as possible, and is teaching the world how to inject artificial intelligence into apps, websites, and software. Technology Editor Peter Ward went to an IBM cognitive coding class with little or no coding experience, to try and build a weather bot.

To be frank, when I arrived for my coding class at Ace Hotel in New York, I didn’t really think I’d be able to build a bot in two hours. However, a couple of (fairly) stress-free hours later, I was using my own bot to find out the next day’s weather in Denver.

IBM has teamed up with Ace Hotel and Mogul, to host a number of cognitive coding classes across the world, in which people are invited to try building a cognitive coding app, and experience first-hand how easy it is. And the experience is important.

As a coding novice, I was left pleasantly surprised at how easy it was to utilize IBM’s Watson, the company’s Jeopardy-beating, U.S. Open-organizing, cancer-treating artificial intelligence system. Full disclaimer: I was helped by Armen Pischdotchian, an Academic Tech Mentor for IBM, who guided me through the Watson Hands-On Labs tutorial with good humor, vast knowledge, and some very welcome patience. But the process was still simpler than most would think, and everyone else in the room seemed to breeze through the tutorial. 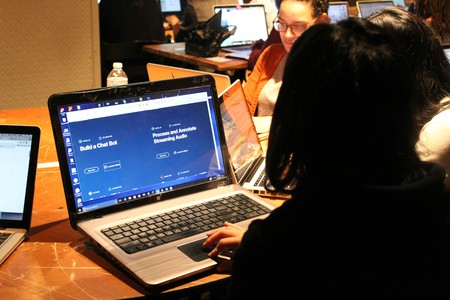 Cognitive Coding was held at the Ace Hotel in New York | Courtesy IBM.

What makes building apps with IBM’s Watson easier than expected, is that you’re putting together ready-made building blocks, rather than building from the ground up. Features such as being able to listen and understand speech, knowing the location of a user, and conversational text have already been built by IBM, and ready to be plugged into your app.

By the end of the two-hour session, I’d put together a bot that could tell me the weather in any city in the U.S. I didn’t tell the app how to understand requests, or how to access live weather data to provide an answer—I simply put several existing Watson services to good use.

IBM’s cognitive coding class is part of something much bigger, both for the company and its hosts in New York. Ace Hotel, one of the city’s most popular co-working spaces, has held several technology and coding events in the past, including a health-based codeathon series, and the VIA Festival in Pittsburgh.

IBM, meanwhile, is using its Learning Lab to help equip people of all backgrounds to thrive in an increasingly digital world. Jeanne Jang, IBM Innovation Lab’s director, says the Learning Lab’s goals are to make artificial intelligence and other advanced technologies more accessible and easy to master for a diverse set of people.

“On the Learning Lab we have a catalog of courses that include content from IBM, as well as from partnerships like Codecademy, Coursera and General Assembly. We did a market scan to engage with top learning providers in order to aggregate and curate the best courses to offer individual users,” she says.

“The company has a long-standing commitment to diversity and education on multiple levels. For example, P-Tech is a program that IBM created in partnership with local governments and colleges, where high school students in under-served communities have the opportunity to graduate in 5–6 years with a high school diploma and an associate degree with a technical major. We are committed to developing technical skills in diverse communities in order to meet the growing demand. We see that ultimately it’s about the skills you have to do the job, and less about the specific degree you have.”

Coding is a hugely important skill for anyone to master, and being able to wield the power of complex technologies like artificial intelligence on top of that has the potential to make anyone, no matter how educated, much more employable. Including, perhaps, technology journalists.