How to Become a US Open Ballperson

Get an inside look at the US Open ballpersons tryout and find out what it takes to make the cut in order to join the select group who boast one of the coolest summer jobs in New York City.

Steven Sokol is crouched along the net, ready to spring into action. A tennis ball smashes against the taut court divider and like a shot, off he goes. Sporting a white hat displaying the iconic University of Michigan “M”, Sokol sprints across the court, fetches the fuzzy yellow ball, and returns to his position, standing like a sentry at full attention.

He replicates this action multiple times, eventually rolling the acquired bounty down the line to another participant positioned at the rear of the court. Sokol then switches places with the other US Open ballperson hopeful and showcases his skill set from another vantage point.

Sokol, of Katonah, NY, is one of approximately 400 participants vying for 100 coveted spots as part of the newest crop of US Open ballpersons. Each year, the US Open, one of the four global Grand Slam tennis tournaments, hosts tryouts for their ballpersons. The tournament, held at the USTA Billie Jean King National Tennis Center in Flushing, NY, employs 275 ballpersons to maintain order and efficiency during the event’s three weeks of action each summer. 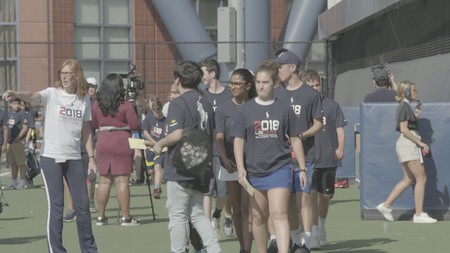 The initial tryout, which saw less than half of the 1,000 registrants participate, was held on June 26. Those who impressed with their speed, agility, accuracy, athleticism, and tennis IQ earned a call back in early July. Approximately half of those participants will earn a job alongside a returning group of veterans as a ballperson for the US Open, which is celebrating its 50th anniversary in 2018. Originally known as the US National Championship, the event actually dates back to 1881.

“I think there’s a lot of people who admire what they do,” says Tina Taps, Director of US Open ballpersons. “If you watch a tennis match, it’s very hard to see what they do because they aren’t really shown on TV, but you do see them if something goes wrong or if they make a spectacular catch or something.”

Ballperson candidates range in age – anywhere from 14 years old and up – and tennis background. Some, like Marie Claire Rajcoomar, make a last-minute decision to try out. The 17-year-old from Queens has been watching tennis for years, but it wasn’t until seeing a commercial promoting the tryout that gave her the final push to head to the USTA Billie Jean King National Tennis Center and give it a go.

Carlo Francisco, 22, has tried out every two years for the past eight years. The Yonkers native was selected each of his prior three attempts, but this time, brought brother Miguel Salen with him.

“He forced me into it,” Salen says with a laugh. “It would be fun. It would be a nice experience if we both were working in the organization.”

For Taps, who has been in her role for 30 years, it’s not just about finding the best athletes who can quickly and efficiently retrieve tennis balls. It’s about proudly representing American tennis.

“It’s the US Open, so we’re representing the best of the best in our country,” she says. “We want to make sure that we handle it perfectly so the players can have a successful match.”