How They Put the New York Wonder in 'Wonderstruck'

Director Todd Haynes and cinematographer Ed Lachman tell us about their thinking behind the elaborate visual scheme that gave Wonderstruck its mythic look.

Spiritually and symbolically, New York City plays a vital role in the journeys of two children searching for answers in Todd Haynes’ densely layered Wonderstruck. It’s hard to think of another recent movie that so poetically renders the city as, simultaneously, a daunting alien terrain and a repository of hopes, dreams, and memories.

Based (like Martin Scorsese’s Hugo) on an illustrated novel by Brian Selznick, Wonderstruck sends Rose (Millicent Simmonds) on a ferry from Hoboken, New Jersey, to Manhattan in search of her favorite movie star (played by Julianne Moore) in 1927. Fifty years later, Ben (Oakes Fegley) of Gunflint Lake, Minnesota, arrives on a bus at Port Authority to find the father he has never known.

“New York becomes a place where stories get told,” Haynes said in a recent interview, “and, in this case, a backstory is told that this child, Ben, was deprived of. It’s like getting to know who you are in reverse proportion. Rose constructs a future. Ben constructs his past. Searching for a father, he ends up finding a mother figure.”

“New York is a refuge for the kids, where they come to solve the mystery of their lives,” said Ed Lachman, Haynes’ regular cinematographer, who shot Wonderstruck. “They go there to find their identities, which is a great metaphor for what New York is for people. We all go there to find out who we are.”

In harnessing the film language of the eras in which Rose and Ben each came to New York, Haynes and Lachman consciously drew on movies that reflected the tenors of the times.

“The golden ’20s before the Great Depression were about growth and prosperity so we looked at F.W. Murnau’s The Last Laugh [1924] and King Vidor’s The Crowd [1928], which were the high mark of sophistication for the black and white period,” Lachman said. “When sound came in, the cameras were much larger and harder to move around, and cinematic language ironically took a step back.

“In the ‘70s, the US economy was in a recession and there was stagnation in New York City along with physical deterioration,” Lachman continued. “For that, [we] looked at the still photography of William Eggleston, Richard Misrach, Joel Meyerowitz, Joel Sternfeld, Mitch Epstein, and Saul Leiter,” the latter of whom also influenced the 1950s look of Haynes’s Carol (2015), also shot by Lachman. Haynes said that Helen Levitt’s photography was another influence on Wonderstruck. 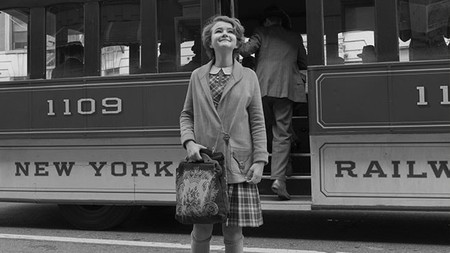 “The three films that were prominent to me for Ben’s story were Midnight Cowboy [1969], Mean Streets [1973], and especially The French Connection [1971],” Lachman said. “They showed this kind of foreboding, frightening world that Ben is venturing through. We used raw camera movement to create this gritty look of realism, which is contrasted to the black and white and chiaroscuro studio lighting and balanced formalism with the orchestrated movement of silent movies that characterizes Rose’s world.”

“Many of the cameramen of the 1970s used long lenses,” Haynes said. “It was all about flattening the image and moving away from deep focus cinematography.

“Also in the ‘70s, filmmakers universally decided not to move the camera so much, to let the lens do the moving for you through panning, zooming, racking focus, as in Robert Altman’s films, to survey deep space through all the refractions and diffusions of focal distance. It’s about not entering the action the way deep focus cinematography reminds you that you have a three-dimensional intrusion into the space of your material.”

A typical example of this in Wonderstruck is a scene that shows a middle-aged woman played by Julianne Moore walking through the Manhattan streets—to the sound of Eumir Deodato’s jazz version of “Also Sprach Zarathustra” —for what will be a fateful encounter with Ben at her brother’s bookstore. 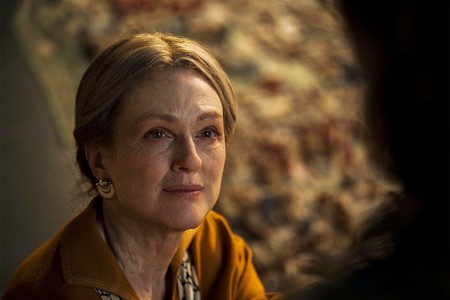 Capturing the vivid colors of New York—as filtered through the movies of the 1970s—was also essential to Lachman and Haynes vision. Haynes marvels at “the weird yellows, ochers, and purply brown colors that converge in The French Connection. I just couldn’t stop watching that movie—it was masterful.”

“The saturation of the colors was different,” Lachman says of 1970s cinematography. “I found there was magenta in the shadows and green or yellow in the highlights, so I tried to emulate that on our film by using daylight stock indoors and sometimes indoor stock outdoors, and then not fully correcting it.” For the black and white scenes featuring the young Rose, he asked Kodak to manufacture an early film stock and then had to find a way of getting it developed.

“Both kids in this parallel journey somehow feel pulled along by destiny. Why are these two stories shown in one movie?” Haynes asked rhetorically. “The question of this mystery is posed every time you cut from black and white to color. It’s in the inter-cutting—in the the irreducible language of movies—that that primal question keep getting re-established. You’re propelled forward each time it’s restated.” 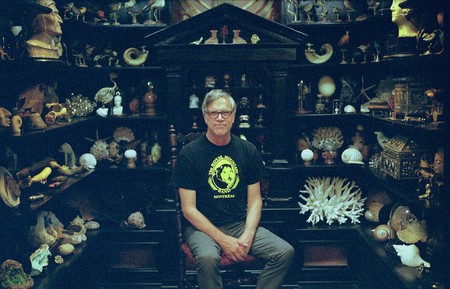 Todd Haynes in front of a cabinet of wonders | © Amazon Studios

Ben and Rose’s problems as new arrivals are compounded by deafness. Rose was born deaf. Ben is deaf in one ear until a lightning strike, seen in the movie, costs him his hearing entirely.

“Their stories are mirrored in their deafness, and we wanted to create visual metaphors for that,” Lachman said. “I like to think of Rose’s world as hearing with images, so her story in the ‘20s is presented as a silent movie.”

Thinking about how to convey Ben’s experience of deafness, Lachman called up Owen Roizman, The French Connection’s cinematographer, to ask him how he moved the camera in the streets in William Friedkin’s classic crime thriller. (Haynes does an affectionately growly impersonation of Lachman getting on the phone to the 81-year-old veteran Roizman.)

“We presented Ben’s story as the subjective world of a newly deaf person using floating shots, overcranked shots, various suspension devices, to remove us from the objective experience of the hearing world,” Lachman said.

“When I reached out to Owen Roizman, he told me he used long tracking shots in the street on a Western dolly for The French Connection.” A Western dolly is camera platform on wheels with pneumatic tyres that does not use tracks.

“We thought that would help remove us from the objective experience of the hearing world,” Lachman explained. The Wonderstruck camera team also used a rickshaw dolly—”a kind of a wheelchair in which the camera operator sits”—to help convey the emotionally noiseless experience a deaf person has walking along a street.”

Ben has been having a disturbing recurrent dream about being menaced by rampaging wolves. They come from one of the dioramas he had seen at the New York Museum of Natural History when he was small, but only when he’s learning about his family history late in the movie does he glean the full significance of the wolves.

“What Ben is in search of is a story of death,” Haynes said. “He doesn’t really know it yet, but all of that is embodied in this wolf diorama that has haunted him. It has invaded his unconscious and is driving him to this journey that is destined to reach a certain pivotal point of confrontation, the return of the repressed.”

Rose and Ben both marvel at the museum’s “cabinets of wonders,” or cabinets of curiosities. There is a sense in which Wonderstruck itself is a cabinet of wonders—the wonders being the Natural History museum, the Queens Museum, an old bookshop, and even the teeming streets.

The artist Joseph Cornell’s box assemblages were a prime influence of Wonderstruck. “I have to give Brian Selznick’s concept its due because there’s a coherence of ideas that then get played out in the book, including the Joseph Cornell boxes,” Haynes said. “It’s about the way we collect and preserve memories through putting them in boxes and holding them in space. And it’s a way in which we master knowledge and a way in which we master death.

“The dioramas in the Museum of Natural History are a denial of death of the hunted animal. We put it back in its habitat and recreate its moment of privileged life to reflect on what it means.”

Eventually, for important reasons, Ben hears Rose’s story. Since, like her, he is deaf, however, he “hears” it through visual clues—notably when Moore’s character takes him to visit the Panorama of the City of New York at the Queens Museum.

While they are looking at this astonishing scale model of the city, which was commissioned by Robert Moses for the 1964 World’s Fair, Haynes uses miniaturized vignettes to relay to Ben privileged moments from Rose’s life.

“The miniatures connect back to the wolves diorama and our wanting to imagine that Ben is picturing the story [of his family’s past]—he’s finally reading the narrative he’s been hungering for, and it’s conveyed in exactly the same way that that pivotal diorama of the wolves was conveyed,” Haynes said.

“These miniatures are little tableaux, mostly static, that are about privileged moments within the narrative. I just chose to accent each of them with a little bit of movement.That goes back—in three-dimensional form—to what an illustrator does when he or she tells a story with drawings in a book. You pick a privileged moment, a frame, a bit of the story, and hold it in place.

“It mirrors the language in Wonderstruck specifically,” Haynes continued. “The thought of the panorama starts to ricochet backwards into the language of the film. It’s all right there.”

Holding up a frame

“Museums are institutions that preserve time and space. And the panorama contains a miniaturized space itself. This is one of the ways in which we hold things, as in frames.

“All movies are frames, but because they have verisimilitude we pretend the frame isn’t there—that we’re just seeing natural life,” the director elaborated. “People ask me, ‘Why do you always make period films?’ I always think when you re-create the past, you hold up a frame as a way to reflect on the present. The relationship between past and present then becomes something the viewer is asked to reflect upon and manifest for themselves.”