How the New York Knicks Got Their Name 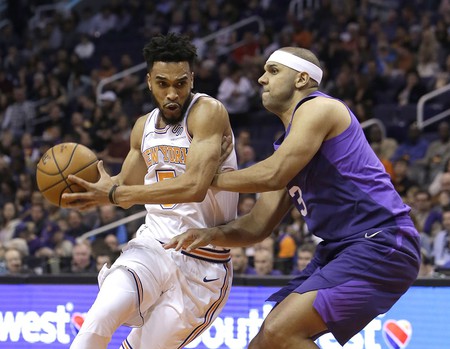 The New York Knicks are the epitome of New York City. The city’s first National Basketball Association franchise pays homage to the city’s founders and history not only with its name, but also with the team’s colors.

So, how did the Knicks get their name? Short answer: randomly.

New York’s basketball franchise was awarded to owner Ned Irish in 1946 as a charter member of the 11-team Basketball Association of America (BAA), which would later merge with the National Basketball League (NBL) to form the NBA three years later.

The team’s name, originally Knickerbockers, was drawn out of a hat.

Team executives including Irish, public relations director Lester Scott, and Madison Square Garden executive Fred Podesta wrote names on pieces of paper and put them into a hat. The majority of the options listed were either Knickerbockers or Father Knickerbocker, the symbol of New York City, according to Podesta.

The name was selected as Knickerbockers, which was soon shortened to Knicks.

New York City was originally founded as New Amsterdam by Dutch settlers in 1625. Knickerbockers (or knickers) referred to the style of pants worn by these settlers that were rolled up just below the knee.

The image of a Dutch settler became synonymous with New York City. The city’s most popular symbol in the 19th and 20th centuries was Father Knickerbocker—a man wearing a cotton wig, three-corner hat, buckled shoes, and knickers.

The New York Knicks’ original logo featured Father Knickerbocker dribbling a basketball. The brainchild of Willard Mullin, a famous sports cartoonist of the New York World-Telegram, was used as the team’s logo from the inaugural 1946–47 season through the 1963–64 campaign. The team introduced its “Classic roundball logo” created by artist Bud Freeman of the J.C. Bull advertising agency for the next season with some iteration used ever since.

With a team name tracing its roots to the city’s Dutch founding, it’s no surprise the Knicks’ colors also pay homage to New York City history.