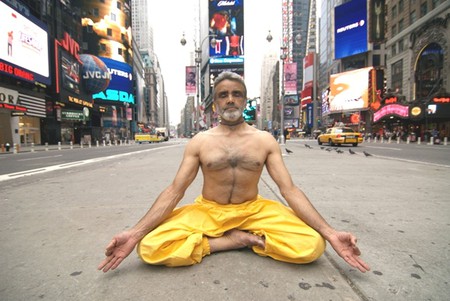 In a recent episode of Longform podcast, presenter Max Linsky interviewed Heather Havrilesky, author of The Cut’s ‘Ask Polly’ column, about her new book, How to be a Person in the World. Havrilesky talked about society’s obsession with self-help and self-improvement — why the best-selling books are always themed around living your best life or becoming your best self. She wondered whether there’s a mass existential crisis at play, a self-imposed pressure to be polished inside and out.

It’s fascinating that a practice derived from the 5,000-year-old texts of Indian Brahmans has become so synonymous with healthfulness in the western world. According to Yoga Alliance, 37 million Americans currently consider themselves to be yogis — a figure that has grown by 17 million in the last four years alone — demonstrating, as Havrilesky identified, an explosion in popularity that continues to gain momentum.

In New York, one of the epicenters of the modern yoga scene, you’ll find every style going, from the classical alignment focused approach of the Iyengar Institute, to the sweat-drenched flow of Y7, known for its hip hop playlists and candlelit ambiance. In such a crowded marketplace, where every neighborhood has its own studios, each with a devoted following, it’s hard to picture a time when none of this existed.

As with many trends, celebrity was the catalyst for mainstream awareness. In the 90s Jivamukti began pairing yoga sequences with pop music — effectively spearheading what we now call vinyasa flow — and attracted A-list ambassadors Madonna and Sting. But before that, back in 1975, a Brazilian man known as Sri Dharma Mittra opened one of the very first independent yoga schools in New York City, the Dharma Yoga Center.

Many people credit Sri Dharma with being a pioneer of yoga in the U.S., so he seemed like the perfect person to interview for National Yoga Awareness Month. I caught up with the master yogi to find out exactly what it was like teaching yoga in the 70s, why he thinks the West is so taken with the practice, and how to find one’s own personal guru.

EB: What were the first classes you taught in New York City like?

SDM: They were a challenge, since English was still very new to me. I knew the material, though, so I did my best to share the knowledge and experience I had with my students.

EB: Did you ever envision yoga becoming so popular in New York and throughout the western world in general?

SDM: There was a time when I was teaching that very few people were interested in yoga, but the ones that found it were so hungry for this knowledge. The fact that yoga has now become so popular is about the evolution of humanity overall. When the student is ready the knowledge will reveal itself, to help them make progress towards the great goal of all life: self-realization.

EB: You are considered to be one of the pioneers of yoga in the USA. What have you observed about the spread of yoga since you opened the Dharma Yoga Center?

SDM: In the beginning, the students were extremely reverent and very concerned with Self Knowledge. As yoga has become more popular, there are still some reverent students who are interested in Self Knowledge, but there are many others who are looking to escape depression, find a little peace of mind, lose some weight, become more physically fit or try and understand what life is really all about. It’s all according to the evolution of the soul. Younger souls will look for knowledge that fits where they are in life. Older souls have a real thirst for Self Knowledge.

EB: Is there an ultimate style or approach to yoga in your opinion? How do you feel about the rise of things like hip hop yoga?

EB: What do you think is behind the hunger for yoga in the West?

SDM: Most people are looking just to find some relief from pain and suffering. When they hear of the good results people get from practicing yoga, they are interested in whether it can help them and are eager to try it. Once they get a good result, most are hooked. When more people hear of these good results, it plants a seed in them to try it. It is like a virus, but of the very best sort.

EB: What is the importance of the guru in the life of the yogi, and how did you know when you found yours?

SDM: Well, I think that like with true love, when you know, you just know. First, you have to check the teacher out, and see whether their vibration matches and meshes with yours. You also have to look at the teacher’s conduct to see if there is harmony between what they say and what they do. If there are nagging doubts or something doesn’t seem quite right, the teacher might be someone you learn something from, but perhaps isn’t your Yogic preceptor. That is a sacred relationship like a spiritual marriage or adoption, and you have to be certain on both sides that everything lines up.

EB: What is the most common question you receive from your students?

SDM: How can I achieve radiant physical health and some mental powers? (The answer is learning and practicing the divinely realized techniques of yoga.)

EB: What is the most important thing your practice has taught you?

SDM: Compassion. To look beyond the individual self to recognize “God” in everyone and everything, including the animals. And the surrender, which is to offer the fruit of every action to the Supreme One. My guru taught me these things, and they are my practice and teaching every day of my life.